For weeks, we have been watching a travesty unfold on Capitol Hill as Speaker Nancy Pelosi and her henchman Adam Schiff attempt an open coup against President Donald Trump. The “silent majority” who voted for Trump has become more and more incensed wondering when will these saboteurs be held accountable? Well, last night three different reports dropped like a mega-ton bomb on the deep state, and they indicate their days are numbered. You’ll love this.

The first bomb to drop last night was the news that Attorney General Bill Barr authorized the Russia probe to be turned into a full-blown criminal investigation.

Ironically, this report comes from the New York Times, who are the open enemies of the president.

“Justice Department officials have shifted an administrative review of the Russia investigation closely overseen by Attorney General William P. Barr to a criminal inquiry, according to two people familiar with the matter. The move gives the prosecutor running it, John H. Durham, the power to subpoena for witness testimony and documents, to impanel a grand jury and to file criminal charges,” NYT reports.

According to sources, the one man who allegedly turned on the deep state during Durham’s initial investigation was Admiral Mike Rogers, who was Barack Obama’s National Security Adviser. Rogers was the one who in December 2017 alerted President-elect Trump he was being spied on at Trump Tower by the deep state.

Based on the Times article, while CIA officials and FBI personnel have lawyered up, it states Admiral Rogers “declined to say whether he had spoken with Mr. Durham’s investigators.” That indicates that he most definitely has, and we know based on Roger’s history of also attempting to stop all the “unmasking of Americans” the deep state was doing in conjunction with their coup attempt, Rogers was defiant of his colleagues Comey and Brennan.

Now, it looks like Admiral Rogers was brave enough to give Durham the low-down on former CIA Director John Brennan and former FBI Director James Comey as it pertains to their activities in weaponizing the CIA and FBI to stop Trump from being elected. We are hopeful indictments are coming soon.

The second bomb that dropped last night on the deep state is the news coming from Inspector General Michael Horowitz.

While IG reports have been somewhat disappointing in the past, especially since the only power they have is to refer people for prosecution, this report must be taken into consideration with what GOP Rep. John Ratcliffe just said.

Everyone is aware that IG Michael Horowitz is looking at the Carter Page FISA application and potential misrepresentations to the FISC; that’s the “FISA court” part. However, no-one has even hinted that anyone in government might be looking at the FBI abuse of the NSA database; and/or the outlined surveillance violations; which would fall under the “FISA act” part, Conservative Treehouse reports.

Rep. John Ratcliffe is one of only four House members who have reviewed every known classified document surrounding the 2016 political surveillance, Spygate and the use of the FISA court; including John Brennan’s two-page ‘electronic communication’ that started the FBI investigation, which is the exact thing Durham is looking into.

Rep. Ratcliffe knows what he is talking about. Today, he explains how the Barr-Durham criminal investigation and the IG report are linked, and it means “criminal referrals” in the Horowitz report:

The third bomb to drop on the deep state last night has to do with General Mike Flynn.

In a lengthy court filing surrounding the issues of Brady discovery material, Mike Flynn’s lawyer, Sidney Powell, drops some serious evidentiary bombshells on the court.  Powell brings Lady Justice to the courtroom, and her revelations are stunning.

Powell proves Lisa Page changed Mike Flynn’s statements to make him look guilty. When the FBI or DOJ officially questions someone, they write them up in a summary called a “302.” Flynn’s 302s were written with lies that do not match the notes Page had taken during the interview.

“The 302’s were modified to make claims that were never made in the interview. The language was purposefully and willfully made to look like something it wasn’t, and in some cases, they made it up completely counter to the actual statement given by Mike Flynn,” CTH adds.

Powell also uncovered new texts from Peter Strzok and Lisa Page in which they discuss their entrapment plan of General Flynn. The lovers actually laugh about setting Flynn up. Here’s the Flynn document Page and Strzok cross out lines and re-write much of his testimony:

And get this: none of that information was provided to Flynn’s defense team. It took Sidney Powell and her team to uncover this set up of General Flynn. Based on this damning information, it sure looks like General Flynn’s case will be dismissed. Then, we hope he sues as many of these deep state rats as he can. 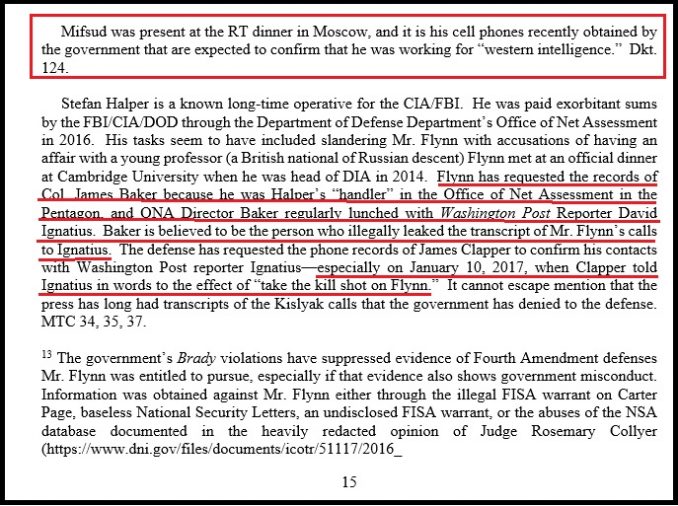 For the last two years, Americans who care about justice and the rule of law have watched as the deep state, the Democrat Party, and the media have attempted to destroy this country.

We waited patiently and prayed there were still some good guys out there who would stand up for our president and those who worked alongside him like General Mike Flynn. Finally, we get some solid news that there are some patriots working to ensure this country isn’t lost.

AG Bill Barr, Prosecutor John Durham, Admiral Mike Rogers, and Attorney Sidney Powell have stepped up. They know they will be slandered and spit at by those deep state rats and their cohorts, but they don’t care. All Americans owe them a debt of gratitude and continued prayers as they continue on this road to justice.