It appears as if the same deep state actors who attempted to take out Donald Trump in 2016-17, are also involved in this Ukraine impeachment coup plot. For those who have spent two years investigating the first coup attempt, they are starting to believe this entire Ukraine phone call was just a continuation of that same coup attempt by the same deep state operatives.

Dan Bongino laid out a convincing case on his podcast yesterday. The July 25 phone call between President Trump and President Zelensky was set up by the National Security Council. This is a very important fact going forward. First, it proves Trump did not initiate the call and therefore it makes the likelihood that he was on fire to get Zelensky to start an investigation into Joe Biden not very believable.

Ciaramella also was a so-called “expert” on Russia and Ukraine.

“A CIA officer specializing in Russia and Ukraine, Ciaramella was detailed over to the National Security Council from the agency in the summer of 2015, working under Susan Rice, President Obama’s national security adviser. He also worked closely with the former vice president,” Real Clear Investigations reports.

Bongino points out that one mystery from the Peter Stzrok and Lisa Page text messages has always bothered him. He had never been able to uncover the identity this person Stzrok and Page only referred to as “Charlie,” or the “C.I. guy.”

This “Charlie” was also on the radar of Senator Chuck Grassley and Senator Ron Johnson who informed Attorney General Bill Barr there was something really fishy going on and looked like Stzrok and Page were setting up a spy inside the White House.

“In text messages exchanged between former FBI Special Agent Peter Strzok and former FBI Attorney Lisa Page, the two discussed the possibility of developing ‘potential relationships’ at a November 2016 FBI briefing for presidential transition team staff. Specifically, it appears they discussed sending ‘the CI guy’ to assess an unnamed person(s) ‘demeanor’ but were concerned because it might be unusual for him to attend,” wrote Senator Grassley to Barr.

Here’s the text message exchange between Strzok and Page where they are talking about the upcoming FBI briefing with Trump’s transition team at the White House. 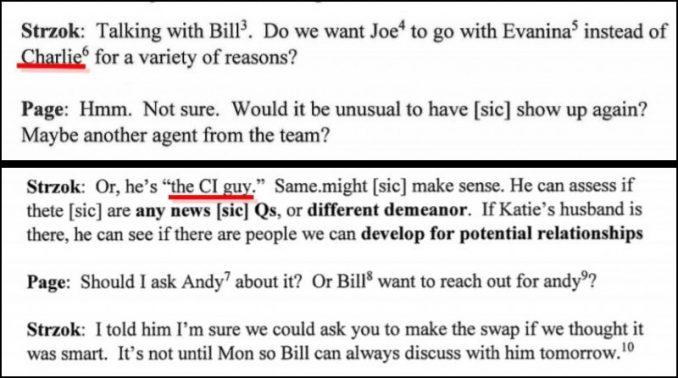 Dan Bongino made the astute observation yesterday that in Paul Sperry’s piece for Real Clear Investigations, where he outs Eric Ciaramella as Schiff’s whistleblower, Sperry makes a point to make sure everyone reading it knows how to correctly pronounce the whistleblower’s name.

“Ciaramella (pronounced char-a-MEL-ah),” Sperry writes. Bongino finds it rather odd to include, and so did we when we first read the piece. Bongino then makes the point both Ciaramella and Charlie sound alike. “Char-ra-mella, and Char-lie sure could be the same person,” says Bongino. “In fact, we got a head’s up on this a while back from one of our sources.”

“So, who is Charlie and why are Strzok and Page so concerned with Charlie, and or the C.I. guy being outed at the White House?” Bongino asks. “Maybe Sperry is giving us a clue here.”

Bongino goes on to say we know Ciaramella was just a low-level CIA analyst and so it would look odd if he was at an FBI and Trump transition team meeting. We also know Ciaramella would have been the perfect spy inside the White House for Strzok and Page.

Another name for a spy is “C.I.” which stands for “Confidential Informant.” We already know Ciaramella was working on the coup attempt with DNC operative Alexandra Chalupa prior to Trump’s election.

Can you imagine the fallout if it is proven that Schiff’s so-called whistleblower was also working for Strzok and Page as their spy inside the Trump White House?

There would be no way this Ukraine impeachment coup attempt could ever recover from such damning information. No wonder the Republicans keep bringing up Eric Ciaramella’s name during Schiff’s bogus hearings. To which insiders say Schiff gets extremely upset and tells his staffers to strike Ciaramella’s name from the record.

Well, it’s too late. Americans are learning all about Schiff’s so-called whistleblower, and the more and more we learn makes it quite clear this another coup attempt and has nothing to do with justice. This is just a continuation of the same plot to take out Trump by the same deep state rats who believe they know better than the 63 million Americans who elected him.

David Hogg has a history of making outlandish and insane statements ever since he rose to fame following the school shooting in Parkland, Florida. But he has been more out of his mind recently, culminating with him potentially facing jail time. […]

Although an entitled University of Alabama football player is getting all kinds of attention after he was reportedly heard yelling “f*ck Trump” while walking out of the locker room, that’s not all everyone is talking about today. As it turns out, local Democrats projected two massive words onto a sign at the Atlanta stadium while President Donald Trump was there – and fans were left absolutely shocked. […]

Senator Chuck Schumer decided to pander to the Democrat voter base by going on the Stephen Colbert show. His mission was to smear President Donald Trump’s name and make him out to be a racist, hoping to push POTUS to sign the DACA deal with no funding for the Southern border wall. Trump told them all, “no wall, no DACA,” and Chucky kept lying. White House press secretary Sarah Huckabee Sanders was so fed-up, she just made Chucky cry with a real brutal surprise. […]

Conservative radio host Dan Bongino vowed to defy officials who passed a mandatory mask order this week in his county of residence. You don’t want to miss this. […]

Oprah Winfrey has come aboard as a producer of a new film that claims the first Americans fought the Revolutionary War to “preserve slavery.” This is such a blatant lie that immediately Winfrey got utterly torched for backing this slander against America. You’ll love this. […]

In case you missed it, Lafayette Square Park in Washington, D.C. has been renamed “Black Lives Matter Plaza,” and that’s where this recent attack happened. A black Trump supporter got smacked hard in the face by one Black Lives Matter protester. Well, immediately, the BLM protester got a rude awakening he never saw coming. You’ll love this. […]

The mainstream media applauds when “protesters” tear down monuments and statutes, but when a Trump-supporting couple paints over a Black Lives Matter “street mural,” the liberal-leaning District Attorney goes nuts in ways that will make your head spin. Don’t miss this. […]

CNN’s Don Lemon delivered a message to all Americans on Tuesday night. Claiming his “slave ancestors” built this country for “free,” Lemon lamented they aren’t memorialized on statues. He added: “If they are going to put someone on Mount Rushmore, considering the history of the country, the first black president should be front and center.” Well, that’s when he got an epic smackdown he never saw coming. You’ll love this. […]

Just how low are Meghan Markle and her sidekick husband Harry willing to go to pander to the Black Lives Matter movement? Well, the “super woke” duo has now burned the biggest bridge to date. They threw Harry’s grandmother under the bus by making the most ridiculous accusation. Citing “racism” in the past of British colonies, Harry egged on by Meghan tried to destroy his own grandmother. Well, that’s when they got a brutal smackdown. You’ll love this. […]

Yusra Khogali is one of the co-founders of Black Lives Matter Toronto. Khogali is on the record saying: “White people are subhuman and have genetic defects.” But that’s not all. The mainstream media is trying to ignore their possible ties to Islamic extremists. Don’t miss this. […]

Robert De Niro had no problem taking more than a dozen loans from the president’s Paycheck Protection Program (PPP) totaling 28 million dollars. The 76-year-old Trump hater used his restaurant and hotel businesses to scam the money meant to go to Americans who were facing bankruptcy due to the COVID crisis. Well, poor Bobby was just made to regret it. You’ll love this. […]

Charlie Daniels passed away on Monday morning. He was 83 years old. Daniels was an ardent supporter of President Donald Trump and a real patriot. He spoke out often about the times we are living in and loved to call out the Democrats and the radical leftwing “protesters.” Daniels had some parting words that are going viral and are causing the leftists to go nuts. Don’t miss this. […]

This disgusting crime happened in Cape Girardeau, Missouri, which is famous for being the hometown of Rush Limbaugh. A black man stopped his car and proceeded to sucker punch a white boy who was break-dancing, and it was all captured on video. But that’s not all. You don’t want to miss this. […]