***UPDATE: Two high-level officials with the Georgia secretary of state’s office and a state elections board monitor said that their investigations revealed nothing suspicious in the video.***

A video allegedly shows a Fulton County “Supervisor of registration” engaging in fraud, according to President Donald Trump’s legal team. This person of interest is allegedly the daughter of another vote counter. They were seen pulling out what appeared to be suitcases of ballots in the infamous video from the Georgia hearing on election irregularities. You don’t want to miss this.

After the CCTV video was presented by the Trump legal team in Georgia on Thursday, which is known as the suitcases of ballots video, Georgia Gov. Brian Kemp called for a full signature audit.

“GA Gov. Kemp is calling on Sec. of State Raffensperger to call for a *SIGNATURE AUDIT* of votes. Kemp appeared on The Ingraham Angle in the wake of damning security cam footage that showed poll workers in Fulton County illegally processing ballots with no observers,” tweeted Kyle Becker.

GA Gov. Kemp is calling on Sec. of State Raffensperger to call for a *SIGNATURE AUDIT* of votes.

Kemp appeared on The Ingraham Angle in the wake of damning security cam footage that showed poll workers in Fulton County illegally processing ballots with no observers.

One of the four election workers in the infamous suitcases of ballots CCTV video allegedly has been identified as Ruby Freeman. She has made various Facebook videos since October 2020 showing her working at the State Farm Arena, where she was employed to verify signatures and be a tabulator.

In the video below, Freeman states: “At the voter registration warehouse…You all know I got 50 million ballots and I work seven days a week twelve to thirteen hours a day.”

Ruby Freedom. Talking about 50 million ballots, her children that work there as well, 👁 From her Facebook page. Part 1 @SidneyPowell1 @realDonaldTrump @RealJamesWoods @CodeMonkeyZ 👁 pic.twitter.com/Sgez93IJxJ

After the first vote counter from the CCTV video was identified as Ruby Freeman, it led people to believe the woman with the “blonde braids,” who pulled out the suitcases of ballots, is Freeman’s daughter, Shay Moss, but that has not been confirmed.

“Y’all want to know who my new supervisor is? It’s my daughter,” Freeman said in an October 26 Facebook live stream. “I just do what she say do, and it’s her show baby, it’s her show.”

Freeman identified her daughter on the November 2 edition of The Atlanta Journal-Constitution, writing that she, as “Supervisor of registration,” was “giving that look to the employees.” She added, “Mommie is so proud of you.”

Freeman’s daughter can be seen with long, blonde braids that are dark at the roots in the photo: 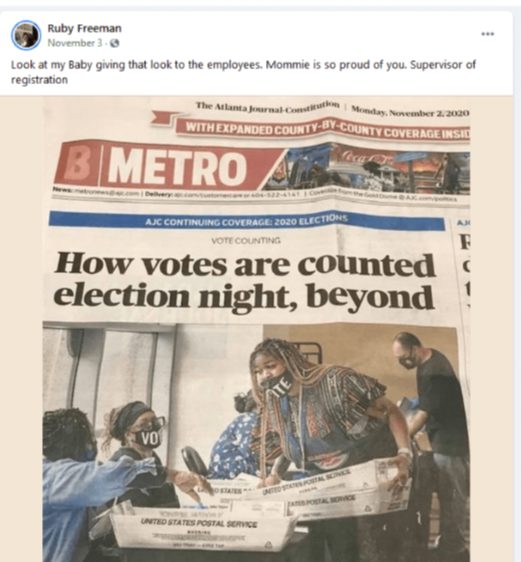 Shaye Moss was also identified as a Fulton County employee in the New York Times from a June 2020 article. Moss is pictured with the blonde braids.

Which brings us to another damning video. Last night, a video that appears to come from The Hill was circulating on social media.

It shows Shaye Moss allegedly taking a USB flash drive and very covertly passing it off to another election worker:

The actions of Freeman and her daughter are clearly seen in the original video provided by the Trump campaign. In this first frame, Freeman’s daughter is seen to be the first vote counter to pull the suitcases from under the table. Her dreadlocks, with dark roots, are clearly visible.

You can also see Ruby Freeman in the purple shirt: 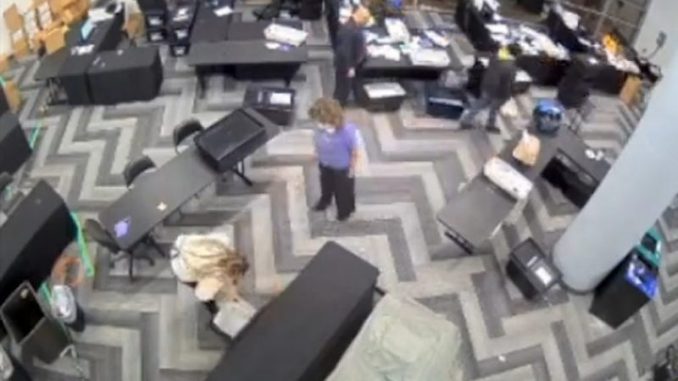 Freeman’s daughter, Shaye Moss, is then seen to be the first person who actually removes items from the suitcases: 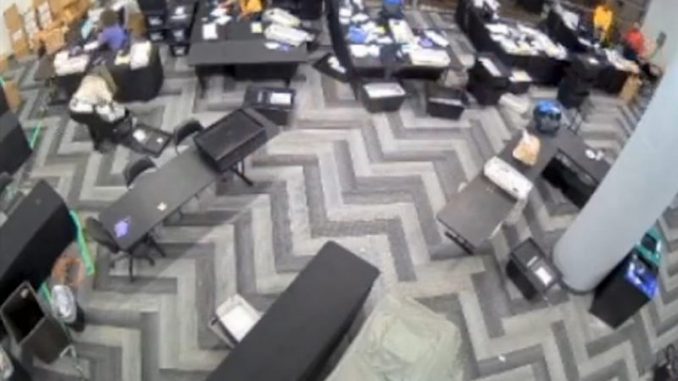 In this image, Shaye Moss appears to be issuing instructions to the other vote counters. They begin moving to the suitcases after she stands in this position and speaks. 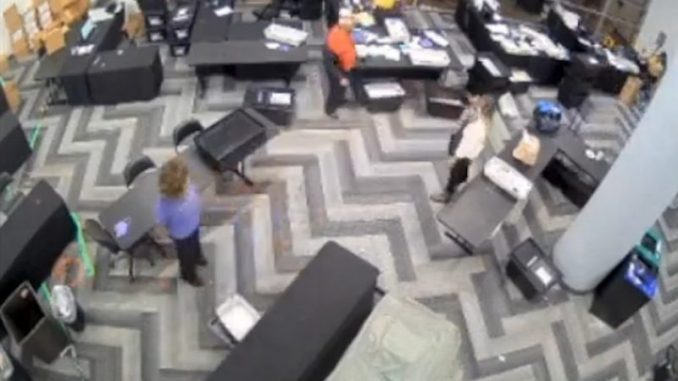 Moss then retrieves a second suitcase from underneath the table. Her mother stands nearby watching throughout this clip. 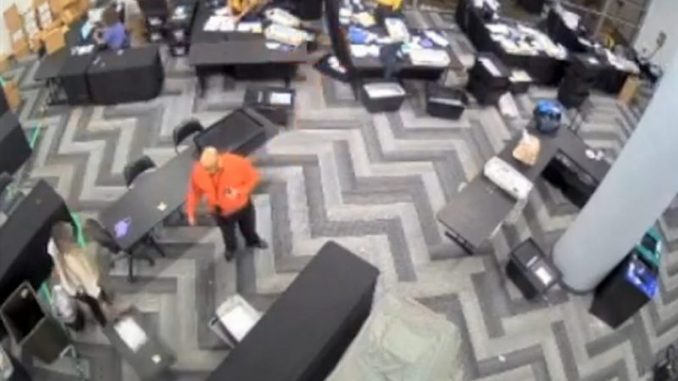 Georgia elections officials have since said those were not suitcases but container boxes that are used to store ballots.

Gabriel Sterling, the head of Georgia’s voting system implementation manager, told a fact-checking website after the footage was released that “if you look at the videotape, the work you see is the work you would expect, which is you take the sealed suitcase looking things in, you place the ballots on the scanner in manageable batches and you scan them.”

Frances Watson, the chief investigator for the Georgia secretary of state, also disputed some of the claims: “There wasn’t a bin that had ballots in it under that table. It was an empty bin and the ballots from it were actually out on the table when the media were still there, and then it was placed back into the box when the media were still there and placed next to the table.”

Watson said that the area was still open to the public and that nobody told poll observers to stay or leave. But her claim and similar ones made by Fulton County officials have been disputed by Georgia GOP Chair David Shafer, who on Thursday, wrote that the assertion that an observer was present during the process is “untrue, as the video shows. Our position is unchanged. Ballots were counted unlawfully and in secret.”

“Even had state monitors been present, the law still requires that ballot counting be open to partisan monitors and the public. But state monitors were not present, as the @GaSecofState now acknowledges and the video shows,” Shafer said.

The walls are closing in on the deep state conspiracy to elect Hillary Clinton as President of the United States and the conspirators who tried to cover it up after President Donald Trump was elected. Now, former FBI Director James Comey, former FBI Deputy Director Andrew McCabe, and Clinton could be looking at jail time. […]

Trump Cancels NOKO Summit After Pulling ‘Fast One’ On Kim, Making Him Lose His Mind

President Donald Trump is handling North Korean Dictator Kim Jong-un like a petulant child who thinks he can do whatever he wants. Before canceling the summit, Trump played Kim like a fiddle and pulled a “fast one” behind the scenes. The leftist media doesn’t want you to know that Trump’s actions left little Rocket Man dazed and confused, with people in North Korea saying he’s losing his mind. […]

President Donald Trump just humiliated Democrats again. In fact, his new CIA Director nominee, Gina Haspel, destroys one of their biggest lies. Liberals are about to freak out, and you don’t want to miss this. […]