A Google employee has gone public with internal documents which prove the most powerful search engine is actively manipulating results. Google insider Zachary Vorhies, who says he has come forward because he “saw something dark and nefarious going on with the company and realized that they were going to not only tamper with the elections but use that tampering with the elections to essentially overthrow the United States.” You don’t want to miss this.

Zachary Vorhies said for three years, since the 2016 election, he has been keeping a dark secret about his employer. Vorhies was a senior tech analyst for Google for almost six years when he was shocked to find internal documents which proved the most powerful tech company in the world had a political agenda against conservatives with the primary goal to oust President Donald Trump.

The Google insider claims it all started after Trump got elected. “I saw something dark and nefarious going on with the company and I realized that they were going to not only tamper with the elections but use that tampering with the elections to essentially overthrow the United States,” Vorhies told Project Veritas.

Project Veritas leaked a number of internal Google documents in June which revealed “algorithmic unfairness” in search rankings. Now, Vorhies is claiming that these documents were widely available to Google employees:

These documents were available to every single employee within the company that was full-time. And so as a fulltime employee at the company, I just searched for some keywords and these documents started to pop up. And so once I started finding one document and started finding keywords for other documents and I would enter that in and continue this cycle until I had a treasure trove and archive of documents that clearly spelled out the system, what they’re attempting to do in very clear language.

The documents provided by Vorhies contain a number of files of concern for conservatives, one of which is called “news blacklist site for Google Now” which Vorhies alleges is a “blacklist” that restricts certain websites from appearing on news feeds for some Android Google products.

We weren’t too shocked to see our own site, Mad World News, included with many other prominent conservative sites like the American Thinker, The Daily Caller, Red State, and News Busters, just to name a few. 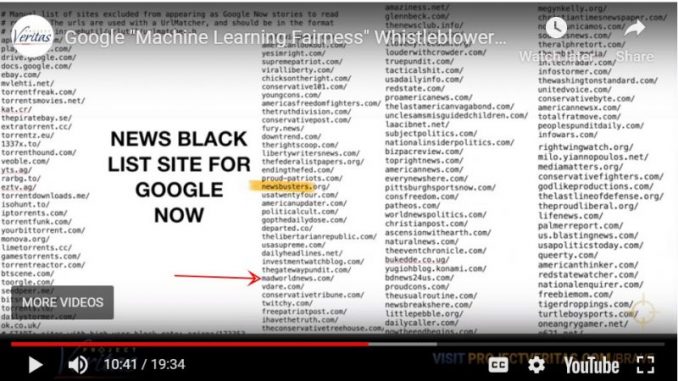 The leftists in power at big tech companies know the best way to stop President Trump from being re-elected is to control the flow of information.

Americans who are undecided about who to vote for in 2020 are the very individuals who sway the election. Pollsters and those who work in campaigns will tell you every presidential election comes down to the swing voters.

Those people will be seeking out information to make their choice. In the run-up to the 2016 election, conservative sites saw a spike in traffic. This is why this war began. Big tech companies like Facebook, Twitter, and Google were blamed by the Democrats for “allowing” voters access to the conservative sites.

That’s why they labeled conservative sites as “fake news” and came up with these algorithms to limit access.  Diamond and Silk rose to prominence during the 2016 election cycle thanks to their effusive, off-kilter pro-Trump videos and other content.

Diamond and Silk are just one example of how big tech is shutting down Trump supporters. “The sisters also claimed that Facebook had begun censoring their content in September 2017, keeping their followers from seeing when the pair had posted new videos. Ted Cruz cited this to Zuckerberg as a ‘pattern of bias and political censorship’ on Facebook,” reported the Intelligencer.

If voters on the fence can’t access conservative sites, then the only information they will get is from the anti-Trump mainstream media. This is vitally important as we enter the election season. Americans don’t need big tech censoring our news. We can make our own decisions on who gets our vote if we have all the information, including the conservative sites powerful leftists don’t want you to see.

Former Vice-President Joe Biden made his debut as a presidential candidate. The 76-year-old Democrat held his first rally in Pittsburgh, and it was one hot mess as he sounded potentially intoxicated. Slurring his speech badly, the shocked crowd looked on as he tried to articulate simple words. Don’t miss this. […]

A Wisconsin school board meeting descended into chaos when Black Lives Matter protesters clashed with members, began chanting, and disrupted the meeting. Sadly, that was only the beginning as police would have to come in and escort members out. Don’t miss this. […]

Now that the Brett Kavanaugh debacle is over, Rosie O’Donnell and her Hollywood pals are finding it very hard to cope with losing. Grasping at straws and trying to make President Donald Trump look bad, they found his recent rallies very upsetting. Rosie surmised there is no way Trump is filling stadiums with supporters. That’s when she and her buddies launched a ridiculous attack on all Trump rallies, and now they are crying buckets of liberal tears. You’ll love this. […]