Meghan Markle made an absolute spectacle out of herself at a recent charity event. While wearing an ultra expensive Oscar-de-la-Renta dress, the 37-year-old former cable TV actress shocked Prince Harry, as embarrassed volunteers could only watch. Markle was supposed to be helping out abused streetwalkers. Instead, she shamed them by using bananas as “props.” Well, the difficult Duchess was just made to really regret it. Don’t miss this.

Meghan Markle, cuddling her baby bump, made an impromptu stop at One25 charity in Bristol, England. The charity helps about 150 prostitutes working out in the streets who are some of the most abused women in our society. Those claiming street sex workers are happily performing their job are sick. That’s the kind of bull crap the pro-Meghan sycophants are pushing after this debacle.

So, by all accounts, this is a worthy charity. Except, leave it to Meghan Markle to make it about herself, in the worst way possible. British reporter Piers Morgan hammered Meghan’s antics. “It was Prince Harry’s condemned face that said it all,” Morgan began.

“As his excited wife Meghan Markle exclaimed ‘I have an idea!’ and loudly demanded a sharpie marker pen, poor Harry looked like a man on Death Row being told his execution date had finally arrived: momentarily stunned but resigned to his fate and the sickening realisation there was nothing he could do about it,” Morgan added.

And what did the difficult diva do? It’s beyond ridiculous.

“Do you have a sharpie marker?” Asks Meghan, directing it to volunteers who were putting together bags of food for the streetwalkers. “I have an idea,” Meghan says turning to look at a mortified Prince Harry, as the volunteers nervously laugh, sensing her idea will be a bust.

“I saw this project by a woman in the States who had this school lunch program where on each banana she wrote like an affirmation or to make each kid feel empowered. One of the most incredible ideas. A small gesture,” Meghan declared as the volunteers looked on in horror. But that’s not all.

A sex worker called Nikki branded the move “really stupid.” She added: “People out here struggle to eat and sleep and she gifts us some words on a piece of fruit,” The Sun reported. “She has the means to help us more than that. It’s offensive, you know.”

Meghan was caught writing on the bananas, “You Are Brave, Your Are Special, You Are Loved, and You Are Strong.” These are cliches that no abused woman having to sell herself out on vile streets wants to hear from a former D-list actress. The obvious phallic symbol given to street prostitutes with Markle’s stupid affirmations is one of the sickest tone deaf displays we have ever seen.

And Markle is no stranger to using the phallic shaped fruit to getting her message out. “Duchess Difficult” drew faces on two bananas spooning which she posted to her Instagram to tip the media she was dating Prince Harry, one of her many over the top narcissistic moves that no one saw as sweet.

People saw it as conniving. The Brits are appalled with Meghan. It was her Marie Antoinette moment. Instead of “Let them eat cake,” Markle tells the streetwalkers, “Let them eat bananas!” We can only imagine how violated those women felt by this debacle.

And the majority of comments on the Daily Mail were negative reflecting the Commonwealth’s growing disgust for the 37-year-old American grifter. 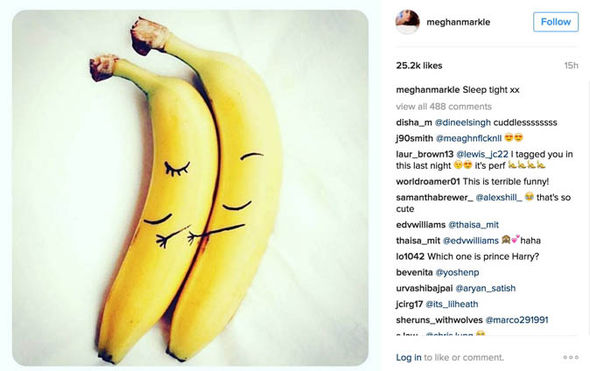 Americans also aren’t too happy with the former Suits star’s antics. “Trapped in the cycle of abuse and addiction? Well, here you go, Love, have a ‘You go girl!’ banana! Feeling better?” Beyond absurd,” wrote Wisconsin Deplorable on the Daily Mail. “The inspirational bananas handed out to sex workers will be one of the unintentionally hilarious moments of the Markle debacle that will endure in memory for decades. A gift that keeps on giving!” Deplorable added.

Those two comments had over 12,000 likes alone. They were sounding off on Twitter, too. “Prince Harry’s face tells us he’s in touch with reality, knows there’re no unicorns, writing patronising messages on bananas for sex workers is a numptie idea, he can predict the backlash, but what Meghan wants, Meghan gets. So let them and the photo op get on with it,” tweeted “Mumpreneur.”

Prince Harry’s face tells us he’s in touch with reality, knows there’re no unicorns, writing patronising messages on bananas for sex workers is a numptie idea, he can predict the backlash, but what Meghan wants, Meghan gets. So let them and the photo op get on with it.

“Her voice sounds so fake. [Prince Harry] doesn’t even know what to do with himself. It’s funny how he is the royal yet she obliterates him 150%- to the point of almost appearing nervous in her (narc) presence …” tweeted Lisa Proust. Prince Harry looked scared and then repulsed when Meghan flipped her hair as she said, “I have an idea!” The 34-year-old son of Princess Diana has relinquished all control to his manipulative wife.

Her voice sounds so fake . Ph doesn’t even know what to do with himself. It’s funny how he is the royal yet she obliterates him 150%- to the point of almost appearing nervous in her (narc) presence …

And many may be wondering how does the Queen feel about this banana ordeal? “Her Majesty has washed her hands of Meghan,” a palace source told Mad World News. “The overwhelming negativity toward the Duchess of Sussex is her own doing and the Queen will do nothing to stop it at this point.”

It looks like Meghan Markle is left to her own devices. At one point the palace cringed and took action by trying to give the former TV star pointers, but no more. Meghan has made it clear she thinks she is “modernizing the Monarchy,” a foolish thought by a former D-list Hollywood star who has no idea she has already lost this war.

Prince Harry is visibly distressed, his bald-spot grows larger by the day, and with their marriage reportedly on the rocks, insiders say Meghan Markle will be called the former Duchess of Sussex sooner than we ever imagined. Packing her bags full of designer duds as she heads back to L.A. and re-inventing her self once again.