Michelle Obama was in Copenhagen, Denmark, last night on the last leg of her big book tour. However, Michelle must be crying her eyes out after the European women in attendance didn’t find the former first lady to be the best thing since sliced bread. In fact, they hated everything about the event: from her ultra-expensive outfit to her arrogant attitude and her lavish lifestyle. You don’t want to miss this.

Michelle Obama is so beloved and fawned over by the mainstream media in the United States, she must be shocked by what happened in Copenhagen, Denmark. The 55-year-old former first lady took to the stage at the Royal Arena wearing a pink pant-suit which was crystal-studded, and she topped that off with gaudy metallic pumps and green nail polish.

Of course, the leftist media was gushing over Ms. Obama’s $2,400 dollar outfit. “The 55-year-old former first lady paid homage to the capital by wearing a $2,410 light pink suit by local Danish designer Stine Goya to visit the Royal Arena on Tuesday evening,” the Daily Mail reported. “Michelle’s pink blazer and straight leg dress pants were embellished with bursts of crystals that captured the light when she moved.”

“The mother-of-two accessorized the sparkly look with a pair of metallic gold heels and plenty of jewelry,” the Daily Mail added. “She wore hoop earrings that peeked out from underneath her dark brown waves and what looked like diamond bands on her fingers. Never one to shy away from a fashion moment, she sported long nails that were lacquered with jade green polish that complemented her blush-colored suit.”

Well, that’s not what the majority of people thought about her outfit. Janice Shaw Crouse, who was executive director of the World Congress of Families IX, and is currently a Senior Fellow at Concerned Women for America, said, “Not a fan of the suit. Plain ill-fitting cheap looking pink suit with splotches of glitter just randomly thrown on.” But that’s not all.

Not a fan of the suit. Plain ill-fitting cheap looking pink suit with splotches of glitter just randomly thrown on.

That was just the beginning of the criticism, and it goes way beyond Michelle’s wardrobe. “CEO of Microsoft Denmark Marianne Dahl criticizes Michelle Obama’s performance of wasting other women’s time with talk about child education, cooking, and interior design,” reports Finans, a Denmark magazine.

“Marianne Dahl believes that the event with the former first lady was bizarre – a woman whom Marianne Dahl otherwise describes as being extraordinarily talented,” Finans added. “Deputy Director of Dell Technologies, Anja Monrad, also had this review: ‘Like being forced into a really bad group of mothers,‘ she writes about the event.”

And the women of Copenhagen didn’t like Rachel Ray either, who interviewed the former first lady. “The interviewer asked indifferent questions and Obama responded with trivialities. If it were supposed to be an event with and for strong women, it didn’t hit the nail on the head at all,” writes Ida Auken on Twitter.

And here’s how the Copenhagen attendees summed Michelle’s appearance: “A good 11,000 had bought a ticket for the event at the Royal Arena – but on social media, the dominant position is that you did not miss anything if you did not attend Michelle Obama’s show.”

These were Michelle Obama fans, but when they got up close and personal with the real deal, they found her to be extremely arrogant and unlikable. They felt cheated. Making matter worse was Michelle prancing around in that horrible pink pantsuit with the flashy gold metallic heels and green nail polish. No wonder the mainstream media are hoping to hide the truth of this event.

However, the leftist media failed.

“I still don’t understand the fascination with her. What has she done for our country besides being the former president’s wife,” said Susana West, commenting on the fawning reports from Copenhagen.

“What the hell is with that outfit?! And the green talons? Gross,” wrote Francesca from Australia.

“How many times did she say I, Me, Mine..” said Bob from the United States. 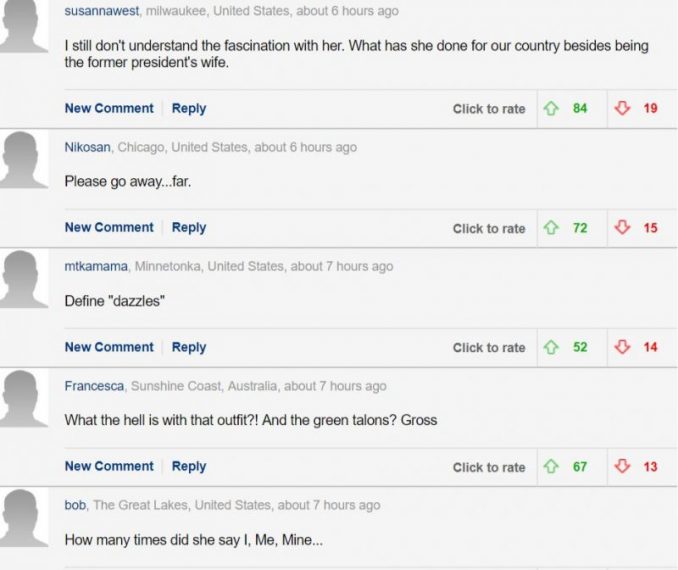 Things took a turn for the worse for Michelle Obama last December when she horrified many when she took to the stage at the Barclays Center in Brooklyn, shocking everyone wearing $4,000 dollar glittery thigh-high Balenciaga boots, teamed with a wraparound neon yellow Balenciaga dress.

The former first lady’s attempt at wearing a style that only a model-thin woman can get away with went all wrong. People were outraged that the former first lady portrays herself as this selfless hero who will fight for the little guy and marginalized people. Then, she shows up looking like a mess and the entire outfit cost almost $9,000 dollars.

And maybe that’s why Michelle bombed in Copenhagen? Even though she tried really hard with her pink pantsuit and green nail polish. The good women in Copenhagen saw right through that mess and found her to be phony. In the end, the real problem isn’t her wardrobe, people just aren’t buying what she is selling anymore.

An elderly woman decided to go to her local gym for something to do and the opportunity to be around other people. While minding her own business there, she was seated at a machine off to the side when she caught the eye of Conor Tisdell who decided to take full advantage of her position which was caught in a picture that has since gone viral after horrified people saw it. […]

WATCH: As Saudi King Sits Next To Ivanka, Her “Effect” On Him Is A Little Too Obvious

A new video has surfaced of gorgeous Ivanka Trump sitting with the royal entourage during her recent visit to Saudi Arabia. As she sat next to King Salman bin Abdulaziz Al Saud, the video cameras […]

Melania OUT CLASSES Michelle Doing One Thing For Her Without Thanks

Although Melania Trump has kept a low profile as First Lady, she has taken blows from the liberal media who refuse to give her a break but still treat Michelle Obama like a queen. When Melania announced her new plans that affect Michelle, you’d think the former First Lady would do the right thing. Instead, Melania can’t win, and you’ll be pissed to find out the slight Michelle just gave Melania. […]

Nancy Pelosi used her position as Speaker of the House to push for more expanded mail-in voting by referring to it now as “voting at home.” Democrats are trying to rebrand their Cheat-by-Mail Scheme, but that didn’t count on Pelosi getting hammered on social media. Don’t miss this. […]

Joe Biden made his biggest blunder to date as he basically told African-Americans that if they don’t back him over Trump, then “they ain’t black!” The former Veep made these racist remarks on the famous liberal radio show hosted by “Charlamagne.” Well, that’s when Americans utterly torched Sleepy Joe. You’ll love this. […]

Former Vice President Joe Biden, the Democratic Party’s presumptive nominee, made a sweeping stereotype about people behind bars, suggesting they have quite a few things in common. One of which, according to Joe, is that they “can’t read.” He didn’t stop there, however. […]

James Carville went on a wild rant, saying President Donald Trump will get his “fat a** beat.” He made a few crazy claims that bordered on conspiracy theory, accusing Republicans of doing things that the Democrats actually do. Carville has lost his mind. […]

A 20-year-old African-American man was caught videoing himself beating up at least two disabled nursing home patients and posting the horrendous videos to his social media accounts. Astute social media users tracked down his personal information and informed the police, and even President Donald Trump was shocked on Twitter and was looking for additional information. Well, you won’t believe how this has now turned into a racial incident by the leftist media and their cohorts. Don’t miss this. […]

The Democrats under the leadership of Speaker Nancy Pelosi is up to no good calling for mail-in voting that leads to ballot stuffing. The Democrats can deny it all they want, but now we have the Department of Justice who just arrested an Election Judge who was paid by the Democrats to make sure “preferred candidates” won. Don’t miss this. […]

Joe Biden is hunkering down in his bunker basement, but we bet his handlers are busy contacting his team of attorneys. A shocking legal twist in the Ukraine case is putting his fall campaign in jeopardy. A judge has ordered Biden named “a perpetrator of a crime” in the firing of the Ukraine prosecutor, and new evidence shows how a deep state official lied under oath during the impeachment trial to protect him. Don’t miss this. […]

After years of litigation with the Department of Justice, Judicial Watch CEO Tom Fitton announced the DOJ lost their lawsuit and was forced to declassify the Crossfire Hurricane documents used to officially launch the coup attempt on President Donald Trump. These documents are nothing short of blockbuster evidence on Barack Obama and his officials’ “alleged crimes.” You don’t want to miss this. […]