Barack Obama looks tired, with sunken eyes and gray hair. His rallies have been absolute nightmares as he stutters and loses control, bashing President Donald Trump. He seems upset that he can’t fill big arenas. The magic is gone for the former president who was campaigning in Indiana and stuttered, “The economy created more jobs in my last 21 months than in the 21 months since I left office.” Poor Barack just got a reality checked. You’ll love this.

Barack Obama has seemingly been called on by the desperate Democratic Party to campaign as if he is still in office, except he’s not, and people are tired of him. He looks old. He looks tired with his gray hair and sunken eyes as he stutters and stammers throughout his old speeches that no one wants to hear.

Barack is also having one hell of a time filling up a venue. Instead, the mainstream media has to take photos at certain vantage points to give the impression that there are tens of thousands in attendance. This issue was captured by Twitter user “Rosie Memos” in footage showing an Obama rally last week. The video was taken from behind the stage and shows a sparse crowd. It’s the reality the former president doesn’t want to face:

It’s more like a blue puddle? Anyway this angle doesn’t seem to be playing on TV, wonder why. pic.twitter.com/6hRzZfUJvu

So, knowing he was getting his butt kicked by President Donald Trump on the campaign trail, Barack decided to pull a fast one. It’s part of the ole Democratic playbook: lie and then lie some more. And, that’s what he did in Indiana on Saturday night.

The guy who doubled the national debt thought he would say he cleaned up Washington, DC. Obama looked weak, voice fading, as he said, “So, I had to take off my coat. I had to roll up my sleeves. I had to get a broom and a mop. And, we had to clean it up.”

This was a riff on Trump’s “Drain the Swamp” motto. Barack Obama and the Democrats cleaning up Washington, DC? Wow, that’s a laugh. In fact, it’s insulting to all Americans with common sense.

Big government grew out of control under Barack’s watch. He set a record for the size of the basic federal workforce, leaving office with more than 1.4 million people collecting government salaries in the civilian agencies in 2017.

Was he rolling up his sleeves when he doubled the national debt and made government spending so out of control? Please, these metaphors are just plain silly and insulting to Americans. Then, he dropped his big bomb, saying, “The economy created more jobs in my last 21 months than in the 21 months since I left office.”

What? It’s like he just makes up the lines as he goes and no one can tell him he is full of crap. Well, Barack Obama is full of it. You see, the Democrats used a sneaky trick when they were in charge that fudged the numbers.

Americans were forced to leave the workforce in droves under Obama, then, after individuals were unemployed for months and months, the Obama administration just dropped them off their charts because they no longer qualified for unemployment. It was as if they never existed. It’s a cute trick to make it appear like unemployment wasn’t as bad as it was.

In fact, Obama’s last job report, with the real numbers, showed the magnitude of his economic disaster. According to “the Labor Department’s Bureau of Labor Statistics, a record 95,102,000 Americans was not in the labor force by December 2017,” reports CNBC.

Now, the Democrats are going around, spouting off numbers, not mentioning the manufacturing jobs. And, if they don’t talk about them, they can spew their lies. Remember, middle-class Americans rely on those manufacturing jobs, yet Obama destroyed them by shipping them overseas.

At a town hall in June 2016, President Obama famously said that some manufacturing jobs “are just not going to come back.” He went on to mock then-candidate Trump by saying he’d need a “magic wand” to make good on this manufacturing job promises.

Months later, as the shock of a President-elect Donald Trump was still being absorbed, New York Times columnist and economist Paul Krugman tweeted on November 25, 2016, “Nothing policy can do will bring back those lost jobs. The service sector is the future of work, but nobody wants to hear it.”

Those are blue collar jobs. Oh, but the Democrats are supposed to be the party of the working-man in America? Right? 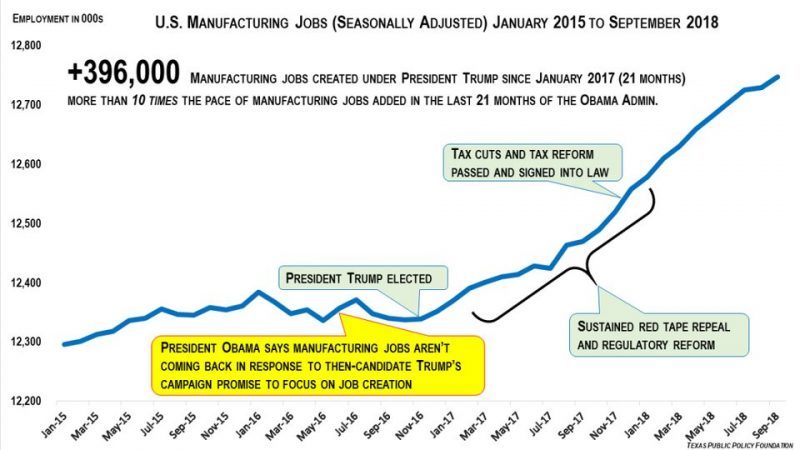 And, one more thing. It’s really convenient Obama touts the last 21 months of his reign. He had eight long years to fix the economy, but all he did was destroy America. As Fox News reports, “[Obama] had the lowest labor participation rates since the 1970s, with 95 million Americans out of the labor force. The so-called recovery has been the weakest one since the 1940s.”

Under Obama, we also had the lowest homeownership rate in 51 years – despite mortgage rates artificially kept at record lows – and over 11 million more Americans were on food stamps. As of April 2018, 2 million people were off of food stamps, thanks to President Trump. He is fixing Obama’s eight-year mess as fast as he can.

So, when these leftists tout this new narrative that “Obama created more jobs in his last 21 months than Trump did in his first 21 months,” don’t buy it. Spread this information far and wide so those still deluded by their so-called messiah can see he had his chance and he screwed Americans.

It’s no wonder the former president is looking and sounding tired with his shrieking voice. When you continue to lie, and then lie some more, it must eat you up on the inside. President Trump’s voice is strong, his energy is high, and his message is “America First.” Barack will go down in history as the first African American president — but he’ll be better remembered as the worst POTUS of modern times.

Michelle Obama is making a last attempt to sway white Americans to vote for Joe Biden. “You’ve been the beneficiary of privilege, that the color of your skin gives you a head start,” the former first lady said. “As a Black woman…only to have those efforts met by scorn, not just by your fellow citizens, but by a sitting president.” Ms. Obama and her message got blasted by patriotic Americans. You’ll love this. […]

After President Donald Trump canceled a visit to the UK, London’s Muslim Mayor Sadiq Khan took full credit for “banning” the U.S. leader. However, just as he was celebrating his pathetic victory, he encountered something in the crowd that quickly made him regret it. […]

WATCH: Oprah Falls On Stage While Speaking About ‘Balance’ At Anti-Trump Tour

Oprah Winfrey is making headlines as she embarks on her new speaking tour called “Oprah’s 2020 Vision: Your Life in Focus.” Joining the talk show queen on stage are Michelle Obama, Chuck Schumer’s niece Amy Schumer, and Saturday Night Live’s Tina Fey. So when Oprah fell on stage while talking about “balance” and touting her Trump-hating message, people are saying it’s karma. Don’t miss this. […]