Rep. Ilhan Omar has caused controversy from the first day she stepped foot in Washington, DC. Now, her past is coming back to haunt her. Police reports reveal that back in 2013 the smug Minnesota Congresswoman was arrested by shocked Minneapolis police officers, who describe a very disturbed woman who “was going to continue her criminal behavior.” Don’t miss this.

Before Ilhan Omar ever had national name recognition, she was a young woman looking for trouble. Raised with an overwhelming sense of entitlement, Omar’s checkered past is now coming back to haunt her, including a current highly-suspect investigation for campaign finance violations.

Back in 2013, Omar was arrested for trespassing, which may sound like a big nothing-burger, but when you look into the police officers’ accounts of the event, it shows a disturbed woman who the arresting officers describe as a habitual criminal.

The incident took place on January 18, 2013, following an event at the Minneapolis Convention Center featuring former Somali President Hassan Sheikh Mohamud. The Somali president was set to stay the night at the Hotel Ivy, causing large groups of Somalis to follow the presidential convoy to the hotel, including Omar.

According to the police report, hotel staff requested police assistance in clearing the lobby, saying that anyone without a hotel room key was not welcome on the premises and needed to leave immediately. The officer handling the incident said the majority of people who were asked to leave were compliant. However, Omar, when approached, was “argumentative” and refused to leave.

“As she stood her ground and refused to leave I took hold of her left elbow to escort her from the lobby. Omar then pulled away from me stating, ‘Don’t put your hands on me!’ Others in her group complied and began walking toward the front entry/exit door as I ordered and I managed to coax Omar out with them,” the police report reads.

Ten minutes after the original encounter, the officer reports finding Omar seated in a different area of the lobby. According to the officer’s account, Omar “remained defiant” and continued to “argue” as he informed her that she would be arrested for trespassing if she didn’t leave.

“Omar was booked at [Hennepin County Jail] as I felt it was likely that she would fail to respond to a citation and she also demonstrated that she was going to continue her criminal behavior,” the officer wrote.

Here are the first two pages of Omar’s arrest report: 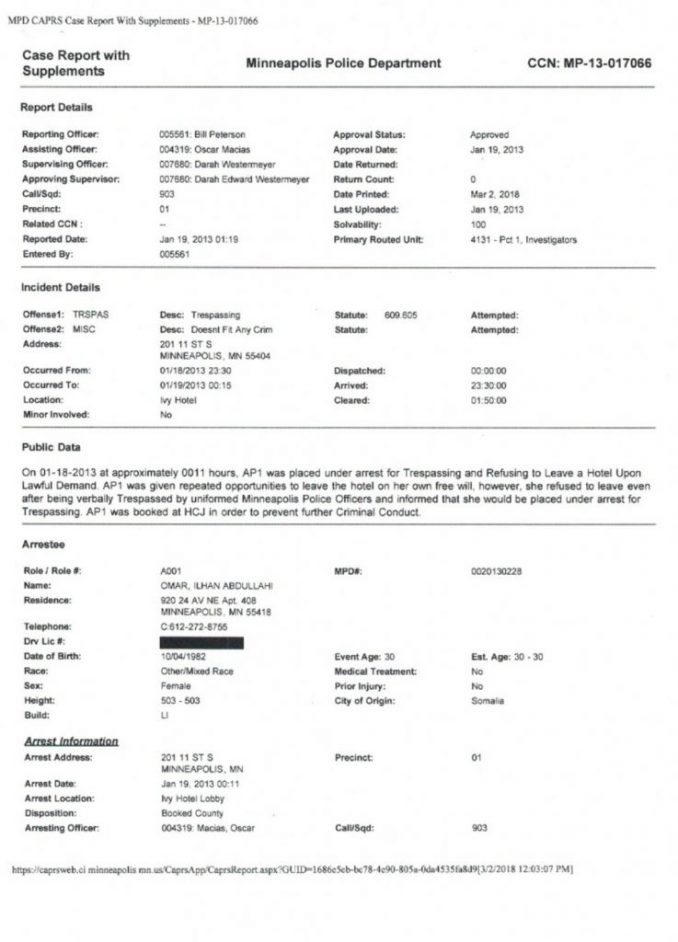 This would still be outrageous behavior for a teenager who wasn’t raised with respect for law enforcement, but here we have a grown woman acting out, making the police officer’s job so difficult that he sized her up as a habitual criminal. “[Omar] also demonstrated that she was going to continue her criminal behavior,” wrote the arresting officer, who showed a great amount of patience with the disturbed Somali leftist.

And it’s not the only thing from the Minnesota Congresswoman’s past that is raising concern. In November 2016, Omar caused quite a stir when nine Somalis were arrested for planning to join ISIS. These men were hardened extremists looking to travel to Syria to become trained terrorists and then come back to the United States and bring the “Caliphate back to Minnesota and beyond.”

Omar wrote a letter on behalf of her countrymen: “As you undoubtedly deliberate with great caution the sentencing of nine recently convicted Somali-American men, I bring to your attention the ramifications of sentencing young men who made a consequential mistake to decades in federal prison,” Rep. Omar wrote.

“The best deterrent to fanaticism is a system of compassion,” she added. “We must alter our attitude and approach; if we truly want to affect change, we should refocus our efforts on inclusion and rehabilitation. A long-term prison sentence for one who chose violence to combat direct marginalization is a statement that our justice system misunderstands the guilty.”

Rep. Omar’s letter shows her first allegiance is to her Somali Islamic brothers, not to the United States of America. And just like the leftwing nuts in Antifa or Black Lives Matter, she sees police officers as her enemy. She lacks respect for law enforcement and was deemed a habitual criminal by seasoned law enforcement officers.

Omar also seems to hate America, the country she swore to “protect and defend.” It’s high time Minnesotans demand a recall vote. Ilhan Omar has no place in Congress and should be voted out and replaced by a law-abiding individual who loves and respects our great nation.

Mad Maxine’s Scared, Goes Into Hiding After ‘All Hell Breaks Loose’ At Her Town Hall Event

Poor Mad Maxine Waters. The seventy-nine-year-old California Congresswoman was back in Los Angeles to hold a town hall event as she launches her 2018 re-election campaign, but things did not go as planned. In fact, Whacky Waters was so scared, she had to go into hiding. It all started when all hell broke loose at her campaign event. You don’t want to miss this. […]

A South Carolina thug got it in his head that he was going to rape a little 6-year-old girl, deciding to strip her naked to get his depraved attack started. However, things would go from bad to worse for him when police learned what else the pervert did just before he was about to victimize the small child – and now, he’s set to spend the next 45 years locked in a cage. […]

After a tense Oval Office meeting with President Donald Trump on Tuesday, House Minority Leader Nancy Pelosi (D-CA) spoke briefly with the press pool outside of the White House. She used the opportunity to take a shot at Fox News, but she was quickly made to regret that move by one of Fox’s own reporters. […]