Rep. Ilhan Omar is getting a reputation as a rabid leftist who hates America. In fact, the 37-year-old Congresswoman has now been called “dangerous” after she was caught admitting that she will not assimilate or respect American culture. Well, the Minnesota Democrat just got some really bad news about her future, making her likely regret her anti-American views. Don’t miss this.

Rep. Ilhan Omar just got back from a travel delegation to South America. The only problem is the Minnesota Congresswoman decided to travel with rabid anti-American, anti-Israel organizations, and it’s causing shockwaves on Capitol Hill.

“Rep. Ilhan Omar has attended a travel delegation to a South American country sponsored by a radical anti-American and anti-Israel organization that supports countries opposed to the U.S. and calls for the return of Guantanamo Naval Base to Cuba,” reports Fox News. “She also grabbed headlines after first accusing the U.S. government of leading a coup against Venezuelan socialist tyrant Nicolas Maduro and then attempting to grill Elliott Abrams, the Trump administration’s new special envoy for Venezuela.”

“Yes or no,” Omar demanded as she glared at Abrams. “Would you support an armed faction within Venezuela that engages in war crimes, crimes against humanity or genocide, if you believe they were serving U.S. interest, as you did in Guatemala, El Salvador, and Nicaragua?” Omar went on to attack Abrams in Gestapo fashion:

Let’s be honest, folks. This newly minted Congresswoman is really out there with her political beliefs. Accusing the American government of leading a coup in Venezuela is beyond the pale. For months, we have watched the nightly news and seen the Venezuelan people out in the streets, starving as they march on their Capitol.

“Now it was revealed that she once traveled to Honduras with an organization called Witness for Peace, a group formed during the Reagan administration that opposed America’s actions in South America aimed at stopping the spread of communism,” added Fox News.

Well, Americans are starting to wake-up to Omar’s antics. Online sleuths uncovered a Twitter exchange the rabid leftist engaged in back in 2012, and it proves she has no intention of supporting immigrants to assimilate nor does she in any way respect our American culture.

In 2012, Ilhan Omar replied to a tweet that suggested Somalis should leave their culture at the door and adopt American culture. In other words, assimilate. Omar replied to the tweet, stating, “Totally disagree America is a melting pot of cultures. Our values is one of inclusion and acceptance!” 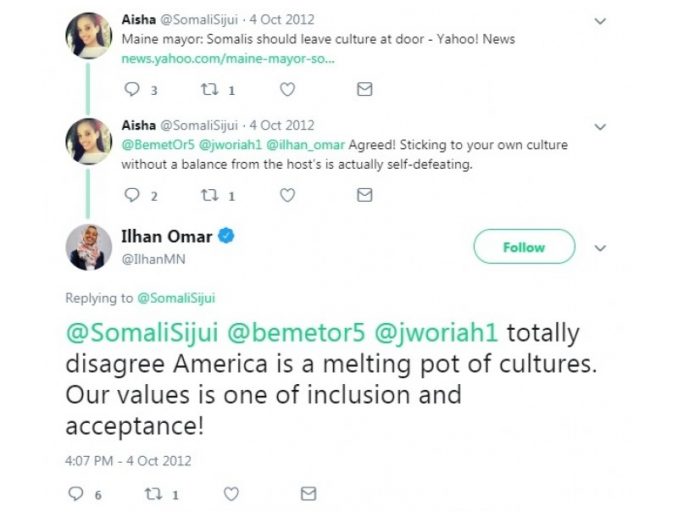 The woman who made the original tweet replied to Omar, stating: “As long as the law of the land is followed there will be peace and harmony. No rituals like honor killing.”

Omar replied, “What does honor killing have to do with Somali culture?”

The woman responded, “Nothing to do with Somali Culture. Some people DO want to force there culture or beliefs on their hosts.”

Omar replied, “I am talking about American values that this Mayor doesn’t get. Somalis aren’t the problem, the mayor is!” 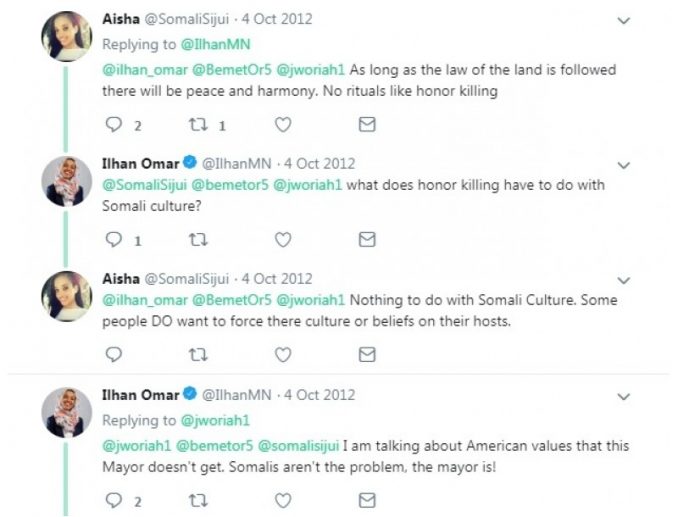 Now, here’s where this exchange really reveals Omar’s true beliefs. Omar said, “Those with problem don’t have a sense of culture & diversity. Being American means being yourself.”

Another Twitter user replied, “As long as our AMERICAN culture is respected. That is based in Judeo-Christian culture and law.”

So, according to Rep. Omar, respecting our American culture that is based on Judeo-Christian values is a laughing matter. The Minnesota Congresswoman fails to comprehend what the immigrants of the early 1900’s grasped so well.

America is a melting pot, but when the Irish, Italian, and German immigrants flooded Ellis Island, they were honored to embrace what it meant to become an American. That didn’t mean they obliterated their European culture from their lives, but they made sure they learned English and adopted wholeheartedly the American way of life.

Well, Omar has gotten on the radar of many Americans for her extremely troubling anti-Semitic remarks, and they are demanding she step down. “Laurie Cardoza-Moore, President of Proclaiming Justice to the Nations (PJTN), launched a campaign to demand the immediate resignation of Congresswoman Ilhan Omar,” the Jerusalem Post reports.

“Ilhan Omar recently made some antisemitic statements and has communicated her support for the Boycott, Divestment, and Sanctions (BDS) movement,” Cardoza-Moore stated. “Ilhan Omar is waging an unholy war against the Jewish people from Congress…She should not be representing Americans,” Cardoza-Moore claimed.

“She is about to learn that the Jewish people don’t stand alone, millions of people of faith and conscience stand with the Jewish people. We will neither sleep nor slumber as she uses the heart of American democracy and freedom to defame God’s chosen people and God’s chosen land,” Cadore-Moore added.

Rep. Omar should not be representing Americans. She wants to see America refuse to support our biggest Middle Eastern ally, Israel. She sees Americans and Israelis as the terrorists, and the Congresswoman has already said as much.

Omar’s election is the direct result of failed assimilation in her own Minnesota district. This is why President Trump’s immigration reforms are so vital. Omar is dangerous, and it’s only a matter of time before she makes such a catastrophic mistake, one that she won’t ever be able to come back from.

Joy: King Trump Demotes Smartest Doctor For Warning Us About Drug, Gets Destroyed

Joy Behar made another crazy allegation against President Donald Trump on Thursday. The 77-year-old co-host of The View said Dr. Rick Bright was “forced out” by the president for warning Americans that the anti-malarial drug hydroxychloroquine was dangerous and was killing those who took it to fight COVID-19. Well, poor Joy gets utterly destroyed for outright lying on live TV. Don’t miss this. […]

Adam Schiff is keeping his bogus impeachment inquiry in super-secret lockdown mode, along with refusing to allow any Republicans access to any of the transcripts. Well, we have just uncovered damning evidence that Schiff colluded with this “smoking gun” witness, Bill Taylor. We also have evidence that it all leads back to Burisma. You don’t want to miss this. […]

The Dominion Software Systems which is responsible for the “glitches” and other “irregularities” in the 2020 election are now attempting a “cover-up.” According to reports, the Vice President of Engineering for Dominion Voting, Dr. Eric Coomer, is being scrubbed from the internet, and they have hired a public relations firm for damage control after he was caught redhanded. Don’t miss this. […]