Chairman Adam Schiff immediately started attacking GOP Congresswoman Elise Stefanik by spreading disgusting lies about her after Friday’s disastrous public impeachment hearing. Stefanik was touted for “kicking Adam Schiff’s a**” during the hearing as she expertly exposed his “star witness” as a blatant liar. Well, now it’s Schiff who is getting destroyed as his vicious lies about Stefanik are exposed. You’ll love this.

Rep. Elise Stefanik became the Democrat’s main target following Friday’s impeachment hearing. The young, vibrant, and intelligent New York Congresswoman first made a name for herself on March 20, 2017, when she singlehandedly exposed then-acting FBI Director James Comey as a liar. At that point, she was the youngest woman ever elected to Congress.

Stefanik questioned Comey about why he purposefully did not inform congressional oversight, Gang-of-Eight, about the FBI investigation of candidate Donald Trump in 2016. Stefanik caught Comey off-guard, and his only response, albeit stuttered, was: “because of the sensitivity of the matter?”

It was the first major breakthrough in proving the deep state really had targetted Trump in an illegal spy campaign. It’s important to note Stefanik wasn’t on the “Trump Train” when she first came to Congress. However, after it became clear to the Harvard-educated Stefanik that Adam Schiff and the Democrats were conspiring to overthrow the duly-elected president, she became a force for truth and justice.

She also became a target for the Trump-haters, which brings us to the barrage of lies Schiff and the Democrats hit Stefanik with over the weekend.

“Rep. Stefanik again showed her acumen when she asked Ambassador Yovanovitch to reconcile her opening statement about not ever discussing Hunter Biden or Burisma against evidence Ms. Yovanovitch previously admitting to an extensive briefing session specifically about Hunter Biden and Burisma.  Once again, Stefanik caught a political operative in their network of lies,” Conservative Treehouse reports.

This line of questioning by Stefanik has gone viral:

This admission by former Ambassador Yovanovitch directly contradicted her testimony that was made only minutes before the admission.

“Contrary to her opening statement, former Ambassador Marie Yovanovitch later admitted under questioning that Obama-Biden officials prepared her to answer questions about Hunter Biden’s role on the board of Ukrainian gas company Burisma during her 2016 confirmation hearing,” Trump War Room tweeted.

Contrary to her opening statement, former Ambassador Marie Yovanovitch later admitted under questioning that Obama-Biden officials prepared her to answer questions about Hunter Biden's role on the board of Ukrainian gas company Burisma during her 2016 confirmation hearing. pic.twitter.com/GrGOxThFyC

Immediately after Stefanik destroyed the Democrats’ “star witness,” Schiff made sure his allies in the media began to attack her. “Hence, as if on cue, the entire apparatus of the political left began attacking their #1 new enemy [Elise Stefanik]. Today the unholy alliance of corrupt political operatives and the allied media went on the attack,” CTH adds.

CNN’s Susan Hennesey, who is their “national security and legal analyst,” got the memo to attack Stefanik during the hearing and tweeted: “Stefanik has really trashed her reputation in these hearings and in ways that haven’t actually advanced the Republicans cause at all. It’s a very bizarre move. Why not just let Nunes and Jordan, who have little to lose by way of reputation, do the dirty work instead?”

Stefanik finally gets her turn. With it she does moderately better than Castor in producing some clips for Fox News tonight. Still substantially outmatched on substance and efficacy by the Dems, but I'll give her that it's more effective than Jim Jordan's histrionics.

CNN’s Hennesey claiming “Stefanik really trashed her reputation” is the mainstream media telling the New York Congresswoman she is now one of their biggest enemies. Hennesey knows the real reason why Stefanik has become such a staunch defender of Trump in these hearings. The GOP Congresswoman has seen all the evidence and is on the side of truth and justice, and that’s why she is so dangerous and must be destroyed.

Then, Schiff and his cohorts take the attack up a notch after the hearing. This fake picture of Elise Stefanik “flipping off the camera” during the hearing was tweeted out by Adam Schiff and many prominent Democrats: 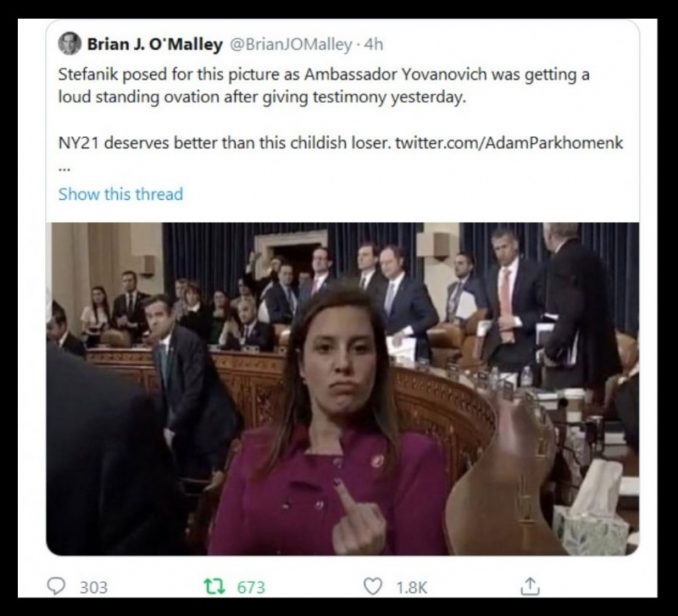 “This is the original video of Rep Elise Stefanik that was altered by to make it seem that she was giving the middle finger (see next post). George Conway retweeted it and called her trash.”

It was truly disgusting to see this attack was also started by Adam Parkhomenko. “Hilary Clinton campaign manager (and friend of Avenatti) started the attack on Congresswoman Stefanik. This is the first tweet. Then it gets worse,” tweeted Svetlana Lokhana.

Hilary Clinton campaign manager (and friend of Avenatti) started the attack on Congresswoman Stefanik. This is the first tweet. Then it gets worse. https://t.co/g6bJwAUGpa

Deplorable Annie responded like so many others by tweeting: “Elise Stefanik kicked Adam ‘Shady’ Schiff’s pompous a** #ImpeachmentHearings She proved just how biased & political these partisan impeachment hearings are #MarieYovanovich was ‘PREPPED’ by Obama’s OWN State Dept on how to answer questions abt Hunter Biden’s ‘job’ at Burisma!”

Luckily, Rep. Stefanik fought back, and patriotic Americans joined her. “It’s VERY Clear. Far-left Dems & Never Trumpers CANNOT handle the Truth. That’s why they are launching disgusting smears & doctoring photos of me in a sick attempt to intimidate me. Thx for proving that our side is WINNING. Donate NOW to help me fight back,” Stefanik tweeted.

It's VERY Clear. Far-left Dems & Never Trumpers CANNOT handle the Truth. That's why they are launching disgusting smears & doctoring photos of me in a sick attempt to intimidate me. Thx for proving that our side is WINNING. Donate NOW to help me fight backhttps://t.co/MlLBNmCor4

Rep. Elise Stefanik came to Congress as a “moderate Republican,” who was not on the “Trump Train.” That’s what makes her a double threat to the Democrats. No one can say that Stefanik is a partisan hack who will defend Trump no matter what.

The GOP Congresswoman, after seeing all the evidence and watching Adam Schiff’s shenanigans firsthand, fought back against the tyrannical Democrats’ plot to unseat the duly elected president. She outsmarted Schiff and his anti-Trump attorneys by exposing their star witness’ lies. And what does she get for doing her job? She becomes the target of attacks by unscrupulous saboteurs in the Democrat Party and their buddies in the mainstream media.

The Democrats fear Stefanik, and they should. They can’t call her a Trump hack. She might just be the most important player in this entire debacle. Anyone sitting on the fence about these impeachment hearings can watch Stefanik in action and know without a shadow of a doubt that President Trump is being set up.

We all owe her a debt of gratitude for being strong enough to stand up against the entire Democrat-media complex that has the power to destroy her. Rep. Elise Stefanik decided she had no choice but to do the right thing. Let’s make sure she gets re-elected by spreading this information to as many Americans as possible who still honor real patriots who are truly fighting real evil in our government and beyond.

Last month, it was Rosie O’Donnell bringing her Broadway buddies to the White House to stage a “hate rally.” Now, it’s Kathy Griffin. The D-list celebrity was so excited as she departed her Hollywood Hills home to join her comedian friends to stage their ridiculous “hate rally” in front of the White House. That’s when things went all wrong for Griffin, as President Donald Trump made her cry like a baby. Don’t miss this. […]

A stunning announcement was recently made about food stamps. It will no doubt have every President Donald Trump supporter in America celebrating. […]

Deranged Scarborough Makes DISGUSTING Claim About Trump at the Border

Fake news pusher Joe Scarborough slammed President Donald Trump while discussing the crisis at the border. Citing Trump’s move to send troops to prevent a massive caravan from reaching the United States, Scarborough said Trump would do something utterly terrible. The host went on to make wild claims about the Secretary of Defense. […]

Early Wednesday morning, a Black Lives Matter activist was arrested for attempted murder after shooting a man in an SUV at a recent “protest.” Of course, you’ll never see this reported anywhere in the mainstream media as the Democrats cower in silence. In fact, there’s an actual video of the event, but the Democrats are making sure no one sees it. Don’t miss this. […]

The Harvard graduate who said in a TikTok video that she would “stab” anyone who told her “All Lives Matter” is now getting a rude awakening. The unhinged grad thought there would be no consequences to posting threats on social media. Well, she was dead wrong. You don’t want to miss this. […]

The national news is buzzing after a white woman was captured on camera pulling a gun on a black family outside a Chipotle in Michigan. There’s additional footage, however, that’s not being shown, and it proves we may have been able to “keep our guns,” but we haven’t been able to keep our rights. […]

Meghan Markle and Prince Harry made an appeal to the Black Lives Matter protesters by apologizing for “institutional racism” that they claim is everywhere. They told BLM they are “sorry we haven’t got the world to the place you deserve it to be.” Harry promised he and Meghan would do everything in “their power” to encourage Americans to do better and “right the wrongs of the past.” Well, that when the dastardly duo got an epic smackdown. […]

The leftwing media and their Democrat cohorts like Donna Brazile are once again pushing a Russia hoax just before the presidential election. This latest hoax claims “anonymous sources” say the president ignored reports that Russia was putting a “bounty” on our military men. Brazile made the big mistake of trying to push this new hoax in front of Dan Bogino who then utterly scorched her. You’ll love this. […]

The scene outside the New York City Council meeting on Tuesday night would make every American angry. One topless “trans-activist” made headlines after he berated black cops. “You’re a f*cking black Judas!” he screamed. “Half of you don’t even have a college education. You can’t even read a f*cking history book!” Well, that when it goes all wrong for this “trans-activist.” You’ll love this. […]

In an effort to “check their privilege,” a suburb of predominantly white liberals led an initiative to defund the police, vowing to never again call law enforcement. However, once as they announced their plans, they made themselves a target for heinous crimes. […]

CNN’s Chris Cuomo attempted a “gotcha interview” with the St. Louis homeowner who made headlines over the weekend for protecting his residence from hundreds of Black Lives Matter protesters. Cuomo came off as combative and downright rude, claiming Mark McCloskey and his wife were just “racists” and not fearful of the BLM protesters. Cuomo added that President Donald Trump was only supporting the McCloskeys because they are “the face of white resistance.” Well, that’s when Mr. McCloskey utterly torched Chris Cuomo. […]

Over the weekend, protesters brought out a guillotine with a message: “It’s time the knives come out.” It was all captured on video. But that’s not all. You don’t want to miss how the violent mob is making a huge mistake as they morph into this “reign of terror.” […]