Taylor Swift, who was once loved by patriots across the country, became a leftwing activist during the 2018 midterm election bowing down to pressure from her liberal fans. Now, reports allege her father Scott Swift’s pro-police, pro-GOP social media posts were just shut down after Taylor caved to pressure from bullies on the left. You don’t want to miss this.

Well, we might have seen this coming. Back on August 9th, Taylor Swift explained her decision not to endorse Hillary Clinton during the 2016 presidential election, arguing that Donald Trump was successfully weaponizing the concept of “celebrity endorsements” and would portray the pair as “the two nasty women.”

Swift decided to break her political silence last year when she provided a hackneyed endorsed Democratic candidate Phil Bredesen over Republican Marsha Blackburn in last year’s midterm Senate election. The singer also decried America’s “systematic racism” against people of color and smeared Blackburn as “not be willing to fight for dignity for ALL Americans, no matter their skin color, gender or who they love.”

In her announcement, the singer also expressed her support for LGBT rights and other progressive agendas. She explained that having once been reluctant to publicly discuss politics “several events in my life and in the world in the past two years” had made her “feel very differently about that now.”

Now, the 29-year-old Grammy Award winner is under fire after reports her dear dad was pressured to delete his Facebook page over his conservative views.

“According to a report from The Daily Mail, Ms. Swift shared a humorous post from her father’s Facebook page to her Tumblr account [last Sunday night]. But once fans stormed Scott’s page and learned of his *gasp* conservative views, the Tumblr post was deleted, and soon after that, Mr. Swift’s Facebook page was deactivated,” the Daily Wire reported. 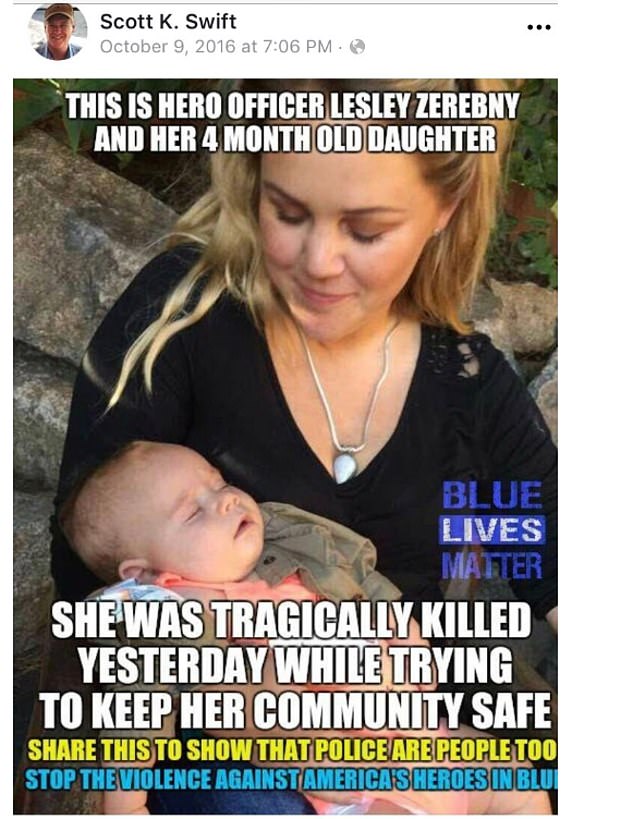 Per the Daily Mail:

But before Scott’s Facebook was deleted, screenshots were taken of what were claimed to be political posts including right-leaning memes about immigration and one refusing to acknowledge Elizabeth Warren as a Senator.

However, the quick deletions also prompted speculation that Swift would not want the political posts out there – a day before she launches her new album ‘Lover’ which is expected to have left-leaning ‘political undertones’.

Last year, Scott Swift donated concert tickets to a grieving Massachusetts police department following the loss of Weymouth Sgt. Michael Chesna, who was fatally shot while investigating a car crash. Weymouth Mayor Robert Hedlund tells The Patriot Ledger that Swift donated “a significant number of tickets” to the town for her shows this weekend in Foxborough, which were distributed among city police officers. 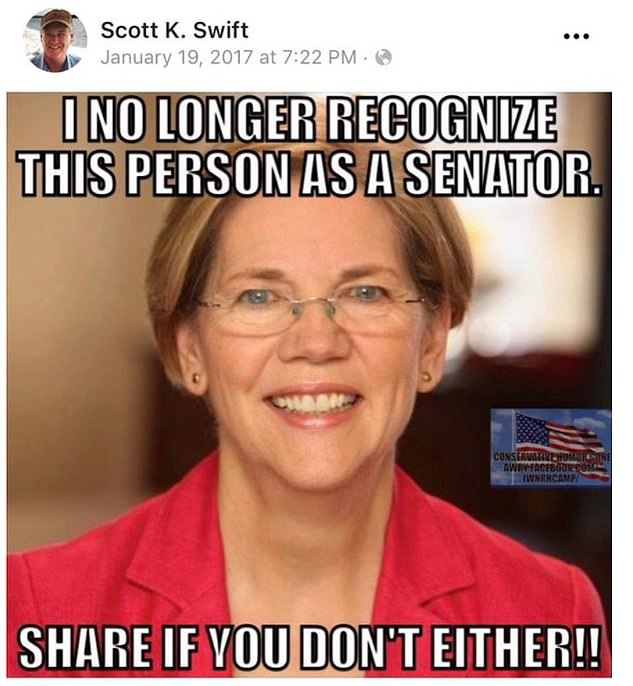 Scott Swift also had strong feelings about illegal immigration and the IRS.

“The IRS has returned my tax return to me this year after I apparently answered one of the questions incorrectly… In response to the question, ‘Do you have anyone dependent on you?’ I wrote: ‘9.5 million illegal immigrants, 1.1 million crack heads, 3.4 million unemployable scroungers, 80,000 criminals in over 85 prisons plus 650 idiots in Washington’. The IRS stated the answer I gave was ‘unacceptable!’,” the meme read Scott Swift posted.

Swift shed her no-politics stance in 2018, coming out to oppose Tennessee Republican Sen. Marsha Blackburn. “Her voting record in Congress appalls and terrifies me. These are not MY Tennessee values,” Swift wrote in an Instagram post. “I always have and always will cast my vote based on which candidate will protect and fight for the human rights I believe we all deserve in this country.”

The pop princess’ latest album is packed with “political undertones,” too. In June, Swift dropped a pro-LGBT video for her hit song “You Need to Calm Down,” which essentially tells conservatives engaged in the culture war to shut up.

Well, we guess she was somehow involved in shutting her poor dad up too.

The Hollywood crowd forgets it is middle-class Americans who have a little extra money to spend on a movie or concert, yet they shun patriotic Americans in favor of these loudmouth leftist troublemakers. They all will be shocked when President Trump wins re-election in 2020.

Poor Jim Acosta. The CNN reporter is publicly whining about how badly he is treated at Trump rallies. “I’ve covered five presidential campaigns… long enough to know this isn’t normal,” Acosta complained. After lamenting over his treatment by Trump supporters, Jim didn’t get the sympathy he was looking for. In fact, Acosta then got a rude awakening he did not appreciate. You’ll love this. […]

Joe Biden’s 2016 phone call with former Ukrainian President Petro Poroshenko was leaked on Tuesday, and it’s landing him in a lot of hot water. In fact, knowing what we know now about the Democrat’s impeachment of President Donald Trump, Biden is caught admitting to keeping vital information from the incoming Trump administration. He also makes “plans” to stay in the loop in Ukraine. You don’t want to miss this. […]

Nancy: ‘Civilization As We Know It Is At Stake’ In 2020 Election, Gets Torched

Nancy Pelosi claimed on Monday that the 2020 election is about saving civilization for her liberal paymasters in the swamp. “The damage that this administration has done to America — America is a great country, we can sustain — two terms, I don’t know,” Pelosi said. “Civilization, as we know it today, is at stake in this election.” Well, poor Nancy immediately got torched by patriotic Americans. You’ll love this. […]