President Donald Trump caused the mainstream media to meltdown after he started questioning the shocking suicide of Jeffrey Epstein over the weekend. They viciously attacked Trump, but he was found to be right again after Bill and Hillary Clinton’s leftist allies were caught redhanded in a cover-up scheme. You don’t want to miss this.

Jeffrey Epstein, 66, was found unconscious in his cell at the Metropolitan Correctional Center and later pronounced dead, raising questions about how the wealthy financier, imprisoned on sex trafficking charges, could have been able to kill himself while in a high-security facility just over two weeks after being placed on suicide watch, reports Fox News.

For “several hours” leading up to his death, correctional officers hadn’t checked in with Epstein — despite being required to visit him every 30 minutes, a person familiar with the situation told Fox News.

The Washington Post first reported the news Sunday night. Additionally, Epstein was supposed to have a cellmate. But the person who was assigned to share a cell with Epstein was transferred on Friday before the 66-year-old’s death, according to the Post. It was not immediately clear why the cellmate was transferred nor why no one else was assigned to room with Epstein.

Epstein was placed on suicide watch in July and had been given psychiatric evaluations after he was discovered with bruising on his neck, but he was taken off suicide watch at the end of July.

It’s really important to note how difficult it would be for Epstein to kill himself while in custody.

Something is very fishy here. High-profile felons like Epstein are in special custody. Why he was taken off suicide watch and why was his cellmate transferred? What did he use to kill himself with?

President Donald Trump was quickly attacked by the leftist media after he questioned the “suicide” on Twitter by retweeting Terrence K. Williams who wrote: “Died of SUICIDE on 24/7 SUICIDE WATCH ? Yeah right! How does that happen #JefferyEpstein had information on Bill Clinton & now he’s dead I see #TrumpBodyCount trending but we know who did this! RT if you’re not Surprised.”

Died of SUICIDE on 24/7 SUICIDE WATCH ? Yeah right! How does that happen#JefferyEpstein had information on Bill Clinton & now he’s dead

I see #TrumpBodyCount trending but we know who did this!

Epstein should not have had anything in his possession like shoelaces, razors, or bedding he could use to kill himself. It’s really quite difficult to kill yourself in jail unless you are a prisoner in the general population.

Yet, he is dead, and now we find out Bill and Hillary’s friends are actively engaging in a cover-up trying to blame Trump.

David Brock is the man the Clintons turn to when they have a big scandal breaking that they need to cover-up. The Los Angeles Times describes him as a “wild-eyed mercenary from the old Clinton wars,” who has skills in the “political dark arts.”

The last time the Clintons unleashed Brock and his special talents in a cover-up were in 2016 when the book “Clinton Cash” was coming out. Brock, who heads “ShareBlue,” is now in the hot seat after a leaked email was found.

Apparently, the death of Jeffrey Epstein, a pedophile and sex trafficker directly connected to the Clinton cabal, has triggered the maximum alert warning for “Avi” and the Shareblue community, as they dispatch urgent talking points for their social media army: 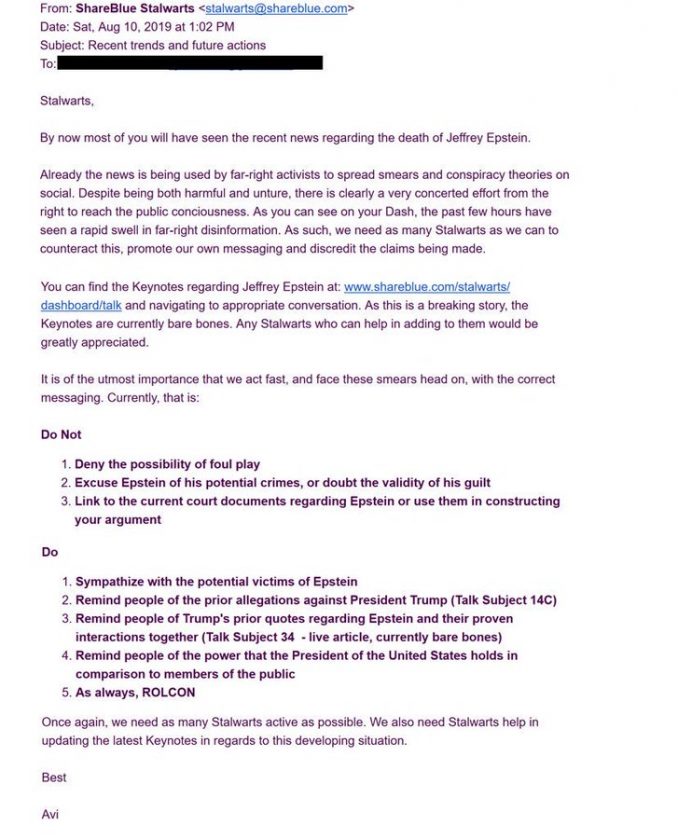 In #5 above, “ROLCON” refers to role-playing as a conservative.

The “stalwarts” are those activists paid to go on-line into all social media platforms and defend the interests of the far-left ideology.  It would appear Mr. Epstein’s death has activated the need for an urgent crisis response from the political left.

Of course, we aren’t too surprised the Clintons’ allies are using Epstein’s alleged suicide as a way to deflect from Bill and Hillary and point the finger at the president.

President Trump banned Jeffrey Epstein from Mar-a-Lago several years ago. According to court documents filed by Attorney Bradley Edwards, who is  representing three of Epstein’s alleged victims, Trump banned his former friend from Mar-a-Lago because he “sexually assaulted an underage girl at the club.”

Meanwhile, Bill Clinton was close with Epstein and was a frequent flyer on the “Lolita Express,” the 66-year-old’s private jet with flight logs showing the former president taking at least 26 trips aboard, Fox News reported.

Well, it just goes to show you when it comes to the truth, the Clintons and their cohorts aren’t interested in the facts, and it sure makes them look rather guilty when they go out of their way to shift the talking points toward President Trump. What are they so scared of?

We really don’t know but are hoping in the near future to uncover why Jeffrey Epstein’s alleged suicide caused Bill and Hillary’s close friends to go into damage control.

Maxine Waters was pandering on Showtime’s “Desus & Mero” show on Thursday night. The 81-year-old Democrat claimed the Crips and the Bloods “have more integrity” than President Donald Trump. Well, Maxine has always supported violence, and her gangster past came back to haunt her. Don’t miss this. […]

Adam Schiff and his Democrat cohorts are desperate. Yesterday afternoon, “The New York Times” came out with a piece titled: “Lawmakers Are Warned That Russia Is Meddling to Re-elect Trump.” Immediately, it became quite clear that it’s Adam Schiff who has leaked the bogus details, and that’s when he got utterly destroyed by President Donald Trump and his high profile supporters. You’ll love this.  […]

Ilhan Omar had an utter meltdown Thursday afternoon after one prominent Somali leader in Minnesota came forward giving details about her alleged marriage to her brother. Omar is facing an FBI review of this marriage issue amongst other things. So, its no wonder she is freaking out. Don’t miss this. […]

Rep. Matt Gaetz braved going into the lion’s den on Thursday. The Florida Congressman showed up on “The View” and didn’t take any prisoners. Gaetz hit Joy Behar hard and asked if she was wearing black over the death of the Democrat Party. Whoopi Goldberg sat there stunned, and Joy Behar started freaking out. But Gaetz was just getting warmed up. You’ll love this. […]

Judge Amy Berman Jackson ordered Roger Stone to serve 40 months in prison on Thursday. Jackson was appointed by Barack Obama, sided with Hillary Clinton against the parents of Benghazi victims, and ruled against the Catholic Church in an Obamacare case. After sentencing Stone, the leftwing judge then cited a debunked Trump conspiracy theory as evidence for the unprecedented sentence. You don’t want to miss this. […]

Rep. Maxine Waters is angry at Americans who aren’t “resisting” the president. “Those who honor the flag, where are you?” Waters asked on MSNBC. “Can’t you see what is happening? We’re in a constitutional crisis in this country. We have got to make sure that Trump’s not reelected. I don’t hear enough voices!” Well, that’s when American patriots gave Maxine a rude awakening she won’t forget. You’ll love this. […]

First Lady Melania Trump has not been treated with the same respect as other first ladies, and luckily that all changed. In fact, she just received the 2020 “Woman of Distinction” award, and boy did it drive the Democrats and their cohorts nuts. You don’t want to miss this. […]

George Soros is desperate to stop the support of President Donald Trump on Facebook. The leftwing billionaire is scared of middle-class Americans who support the president. Soros isn’t playing. He is demanding Mark Zuckerberg, who holds 53 percent of Facebook shares, be fired as the CEO. Is Soros just all talk? No, he isn’t playing. All Americans should be disturbed by his sinister plan to stop Trump’s re-election. Don’t miss this. […]

Queen Elizabeth II is taking no prisoners, even if that means taking a stand against her own misguided grandson. Meghan Markle and her kowtowed husband Prince Harry are waking up to devastating news on Wednesday. The British Monarch took the unprecedented move of dropping a nuclear bomb right on the leftist duo’s money-making scam, and it’s game over for poor Meghan and Harry. Don’t miss this. […]

Democrat Chris Murphy of Connecticut was caught redhanded holding a secret meeting with Iranian Foreign Minister Mohammad Javad Zarif without President Donald Trump’s knowledge. This could be the start of another coup attempt. In fact, Murphy’s actions are so egregious with Iran, they will blow your mind. Don’t miss this. […]