Joy Behar is claiming when President Donald Trump took the Asian CBS reporter to task for being combative and belligerent on Monday, he was being a “disgusting racist.” Joy wasn’t done making wild accusations. “Anybody who still supports [Trump] needs to look in the mirror and ask themselves if they are racist also,” she added. Well, that’s when poor Joy got torched by the truth. You’ll love this.

During Trump’s presser on Monday, CBS reporter Weijia Jiang began by asking the president why he repeatedly boasted that the United States was leading the world in testing.

Jiang then became rude and combative. She also blamed Trump for people dying across the United States.

“You say the U.S. is doing better than any other country in testing,” Jiang said. “Why does that matter? Why is this a global competition to you when every day Americans are still losing their lives, and we are still seeing more cases every day?”

“Well, they’re losing their lives everywhere in the world. And maybe that’s a question you should ask China,” Trump told Jiang. “Don’t ask me, ask China, okay? When you ask them, you may get a very unusual answer.”

That’s when Jiang and her cohort, CNN reporter Kaitlan Collins, tried to tag-team the president. Trump calls on Collins, who then passes her turn back to Jiang. After a few more choice words by the reporters, the president shuts down the presser. He has better things to do than play these games.

“Now, Joy, you say this is right on-brand for him. What do you mean?” Goldberg asked.

“He throws red meat to his base on a regular basis,” Joy added. “And anybody who still supports this guy needs to look in the mirror and ask themselves if they are racist also. That’s all I have to say about him. I’ve had enough of him.”

TRUMP’S TESTY CONFRONTATION WITH REPORTERS: At a press conference Monday, Pres. Trump pushed his view that there is enough testing for states to reopen, although some governors disagree — the co-hosts discuss his exchange with the press. https://t.co/bP3UQjqR2v pic.twitter.com/eAqTmj0LLf

Joy Behar is easily proven to be a liar who continuously spews misinformation.

Behar is only parroting the same lame talking points the Democrats are constantly reporting as facts. When big-mouth Behar claims Trump “defended Charlottesville people,” this has been debunked by fact-checkers. Behar is talking about the neo-Nazis at the Charlottesville protest.

“In fact, as the transcript of his remarks confirms, President Trump ‘condemned totally’ the neo-Nazis and white supremacists in Charlottesville, and used the phrase ‘fine people’ to refer to non-violent protesters who demonstrated both for and against the removal of a Confederate statue from a local park,” Breitbart reports.

Trump specifically points out there were Americans protesting the taking down of the Confederate statue who were not neo-Nazis. Why is this concept so hard to understand? 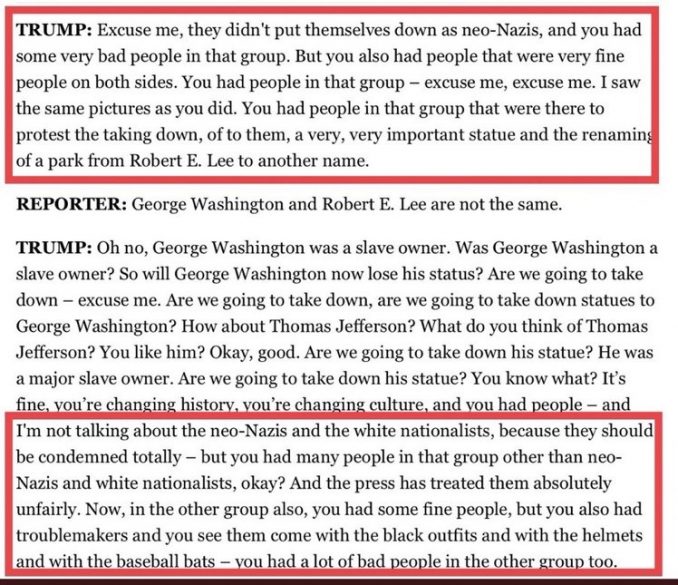 Why? We know Joe Biden started his campaign off by using this Charlottesville example of why the president must not be re-elected.

You can bet Biden’s campaign will be hammering this point close to the election, and so we must arm ourselves with the truth.

Joy also claims Trump has “attacked Mexicans.” This goes all the way back to the very beginning of his presidential campaign on June 15, 2015.

However, maybe Behar needs to check herself. A poll from in 2019 by Telemundo found that 1 in 4 American Latinos would vote to re-elect Trump. Those numbers shocked the Democrat party to the core. The Democrats know they must have the vast majority of African-Americans and Hispanic-Americans to vote for Biden to win the election.

Poor Joy is also getting hammered on social media by Americans who see her latest accusations of racism as ridiculous.

After Talking Points USA’s Creative Officer Benny Johnson posted the video of Behar calling Trump and his supporters “racist” over the CBS reporter incident, Blanton Asabi tweeted: “You won’t even believe how many Asian Americans support Trump! Don’t play the racist card, Asians have seen first hand how evil CCP is. We know Trump is the only president that has the courage to go against CCP.”

You won't even believe how many Asian Americans support Trump! Don't play the racist card, Asians have seen first hand how evil CCP is. We know Trump is the only president that has the courage to go against CCP.

Asabi is right. Asian Americans know first-hand that the Chinese Communist Party (CCP) is made up of brutal dictators who imprison anyone who dares to speak up against their regime.

The whole “Trump is a racist and so are anyone who votes for him” mantra is getting old. It’s a sloppy and unintelligent attack. Only dullards and dimwits would attack Trump as “racist.”

Before the pandemic, the president had ushered in the lowest unemployment levels in over 60 years for every minority category, and the truth is President Trump wants to win.

That means all American lives, regardless of race or religion, will be better off.  We believed he would “make America great again” — and he did. Now, we need him to do it once more.

Once again, “glittery” Rep. Frederica Wilson grabbed national headlines by attacking General John Kelly. Wilson got her 15 minutes of fame weeks ago, but she refuses to go away. Every couple of days, she uses social media to attack Kelly’s character and his patriotism, but this time, President Donald Trump’s “nasty surprise” for Wilson shut her down for good. You don’t want to miss what finally shut the mouth of the “rodeo clown” who was slandering an American hero. […]

Things aren’t looking so good for liberals these days as virtually every one of their Russia conspiracy theories have come out to be false. However, it looks like some are holding on for dear life as Eric Holder just threatened America over the potential firing of Robert Mueller. Too bad for him, a fed-up Army Ranger just dropped 3 brutal words – and he left just about everyone shocked. […]

White House staffers are preparing to move the Obamas out as the Trumps move in on January 20th, and they already see one huge difference with Trump’s plans that have liberals pissed off. Barack and Michelle see themselves as king and queen, and one staffer has outed one of their ridiculous demands that will blow your mind. […]