While most of the mainstream media pollsters claim Joe Biden has a lead over President Donald Trump, other experts are digging into the data in the key battleground states, and it appears that the Biden campaign is in trouble. But that’s not all. A new video of a Kamala Harris rally shows the vice-presidential nominee making a huge gaffe that’s going viral. You’ll love this.

We noticed even Fox News is keeping Americans on the edge of their seat when it comes to the presidential polls. In fact, there is so much data in the key battleground states that they refuse to report on, and you have to ask yourself why?

Well, Larry Schweikart is an American historian and retired professor of history at the University of Dayton. He also is an expert at digging into the data coming out of the key battleground states.

“If you look at the early vote-by-mail, this is a Trump landslide in the making!” said Jesse Watters of Fox News.

This was met with skepticism, but this is exactly what Schweikart is reporting.

Biden’s electoral strategy was simple: direct as many Democrat voters as possible to vote early with mail-in ballots, producing record numbers that would effectively negate the GOP’s historic high turnout with in-person voting, then make up any deficits with late ballots trickling in during the days subsequent to November 3, resulting in an inevitable Biden win.

However, the only way this strategy works is if there are small vote deficits after election day, which requires a massive Democrat lead going into November 3.

Surprise, surprise. The Democrats aren’t getting the numbers they need while the GOP outperforms them.

In Florida, which is a key swing state with 29 electoral votes, the GOP is outperforming the 2016 numbers. We expect the Democrats to outperform the GOP in early voting, but they are barely doing that.

A quick glimpse of the Florida county-by-county electoral map shows a state covered in red. According to the analysis provided by Larry Schweikart, the key early voting benchmark Democrats need to overcome the GOP tsunami on election day is 653,000 votes.

“#FL #EarlyVoting update 2pm. Dem Lead is vaporizing right before our eyes. -28k over last 6hrs. The projection line is going down to about 150k by the election eve. If this continues, Trump wins hands down. This isn’t isolated; it’s happening nationwide! EC Landslide for Rs,” tweeted “Au Ng.”

#FL #EarlyVoting update 2pm. Dem Lead is vaporizing right before our eyes. -28k over last 6hrs. The projection line is going down to about 150k by the election eve. If this continues, Trump wins hands down. This isn't isolated; it's happening nationwide! EC Landslide for Rs pic.twitter.com/mh8bmX9FiQ

“As of Monday, October 19th, Biden was losing the state of Michigan to Trump, 40 percent to 38 percent! And this is assuming the Democrat ballots are all voting Biden; that’s a big assumption,” said Steve Turley, who is a noted author and professor of history.

If these numbers hold, we will see a Trump landslide in the making. Which brings us to Kamala Harris.

Poor Kamala. She recently campaigned at an outdoor event in Asheville, North Carolina.

Harris, who was chosen as Biden’s running mate in a decision that was partly based on her gender and ethnicity, doesn’t appear to elicit a great deal of excitement.

She landed in Asheville wearing a pair of tennis shoes that were probably carefully chosen as a way for her to show us how genuine and raw she is. There’s no excitement when she lands. There’s no large crowd:

I’ll be on the stop with her today and will thread coverage under here! pic.twitter.com/kQcZCa0SdL

The only issue for Harris, who has been a ghost on the trail, is that few people seemed interested in hearing her speak. C-SPAN video from the event shows a gathering of roughly 25 people, and that includes members of the media and security. 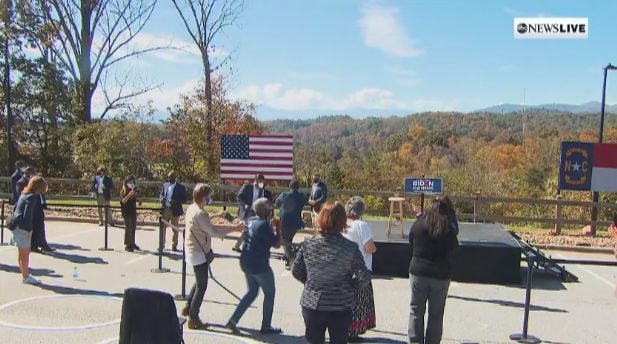 Then, there is the huge gaffe she made.

At another stop on the campaign trail in Georgia, Harris told the very small crowd: “Over 220 million Americans died just in the last several months.”

“And here we thought Net Neutrality was supposed to kill us all. Who knew? Guess those of us writing and reading this are among the 110 million who didn’t die in the last seven months,” Twitchy reports. “This … this was bad.”

Those of us who support President Trump cannot afford to take anything for granted. While we appreciate the work of those like Larry Schweikart and other experts, we must remain focused on the task at hand, and that’s getting Trump re-elected. Our entire nation depends on it.

On Thursday, Former Director of National Intelligence James Clapper appeared on cable news and was asked why he sent three separate requests to “unmask” Lt. General Michael Flynn. Clapper claimed he did not remember why he did that back in 2016-17. Well, that’s pretty ironic since Clapper was the man in charge of all intelligence gathering in the United States, and that’s why he immediately got utterly torched. You’ll love this. […]

Sidney Powell: 450,000 Ballots Cast For Biden ONLY — No Down Ballot Candidates

Attorney Sidney Powell, who represented General Mike Flynn, has now joined the Trump campaign as one of their lead attorneys investigating potential election fraud. Powell, a former federal prosecutor, claims: “We’ve identified at least 450,000 ballots in the key states that miraculously only have a mark for Joe Biden.” She goes on to explain what this means and why this is so important. Don’t miss this. […]

The partial government shutdown is now in its fourth week, with Democratic leadership refusing to approve $5.7 billion in funding for President Donald Trump’s border wall. But once you hear what 4,684,784 non-citizens all have in common, you’ll want to build the wall yourself. This will make you sick. […]