After years of litigation with the Department of Justice, Judicial Watch CEO Tom Fitton announced the DOJ lost their lawsuit and was forced to declassify the Crossfire Hurricane documents used to officially launch the coup attempt on President Donald Trump. These documents are nothing short of blockbuster evidence on Barack Obama and his officials’ “alleged crimes.” You don’t want to miss this.

These documents, in combination with the declassified Flynn case documents and Susan Rice memo, show us the big picture of how this coup attempt started.

One of the big bombshells is what agency started Crossfire Hurricane. Before, it was assumed that the CIA had received a “communication” from a foreign government on Trump campaign advisers Carter Page or George Papadopoulos.

That never happened, which makes launching this bogus witch hunt even more of a blatant disregard for following the law. According to the newly declassified documents, Crossfire Hurricane was launched on July 31, 2016 by former FBI Agent Peter Stzrok.

“[Russian] government had been seeking prominent members of the Donald Trump campaign in which to engage to prepare for potential post-election relations should Trump be elected U.S. President. One of the people identified was George Papadopolous,” Stzrok writes in the official record.

Stzrok writes in the Synopsis: “Deputy Chief of Mission related to the hacking of the Democratic National Committee’s website/server.”

Now, most Americans know the so-called DNC hack was never examined by any law enforcement entity.

Stzrok goes on: “Mr. Papadopolous made about suggestions from the Russians that they (the Russians) could assist the Trump campaign with the anonymous release of information during the campaign that would be damaging to Hillary Clinton.”

It’s also true that Papadopolous was just a low-level volunteer and had no access to Trump. He was the perfect target and patsy for the FBI. The 32-year-old energy sector professional was lured to London on April 26, 2016 by FBI operative Joseph Mifsud.

During the meeting, Mifsud claims Russians “have dirt” on Hillary Clinton; “emails of Clinton”; and “thousands of emails.” Then, the FBI sends this Australian diplomat named Alexander Downer who engages George Papadopoulos in London just days after U.S. intelligence asset Joseph Mifsud told Papadopoulos that Russians had emails from Hillary Clinton.

“Mifsud told the FBI in February 2017 that his contacts with Papadopoulos a year earlier, during the 2016 presidential campaign, were mostly innocuous. He made that point both in an FBI interview and a follow-up email to agents,” The Hill reports.

Poor George, who has no idea he is being targeted by dirty cops like Peter Stzrok at the bequest of James Comey and Barack Obama, tells Downer nothing. However, the FBI claims he said he had “dirt” on Clinton.

Both Papadopoulos and Downer refute their May 10th meeting discussed Clinton’s emails. Papadopoulos notes that Ambassador Downer is recording their conversation.

This means Crossfire Hurricane, the FBI investigation into the Trump campaign, was predicated based on gossip, innuendo, and rumors related to George Papadopoulos.

The FBI had nothing concrete to ever start an investigation. Although most of us knew this, we can now say without any doubt these documents prove the FBI has been lying about this for over 3 years.

What is even more damning against Obama’s cohorts in the FBI is the newly redacted text from Peter Strzok dated July 31, 2016—the day he officially opens up the bogus coup attempt against Trump called “Crossfire Hurricane.”

“Damn this feels momentous,” Strzok writes. “Because this matters. The other one did too, but that was to ensure we didn’t F something up. This matters because this MATTERS. So super glad to be on this voyage with you.” 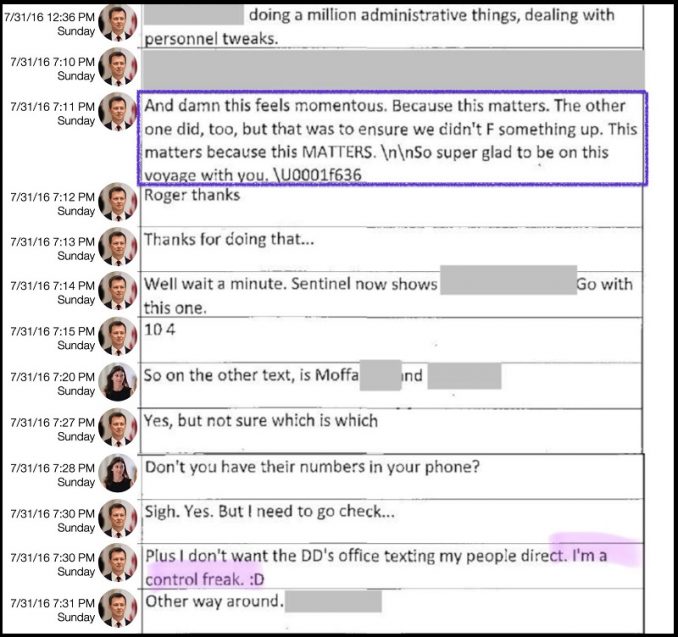 When Strzok says “the other one did too,” most investigators believe he is talking about getting ole Hillary off the hook in the email case. Strzok was the main agent in charge in both cases.

When we fast-forward to December 2016, following Trump winning the election, we can visualize how Obama and his minions must have been panicking knowing General Michael Flynn, as the incoming NSA Director, was about to have access to every document related to Crossfire Hurricane.

That’s why when the low-level FBI agents were about to dismiss the Flynn investigation called “Razor” on January 4, 2017, Peter Stzrok had a fit.

The next day, on January 5, 2017, is the infamous Oval Office meeting where Barack Obama holds back Comey and acting AG Sally Yates, the two officials who will be working inside the Trump administration, and he suggests to them it would be a good idea not to tell Flynn or his boss, Trump, about their ongoing investigations into “Russia.”

Susan Rice’s memo is careful to make it clear that Obama is only “asking questions” about how to handle this information. The huge problem is we can all read between the lines. It’s utterly preposterous that the outgoing administration would not advise the newly elected incoming administration of every last detail when it comes to national security.

With six months until the next election, it is even more imperative for these deep state rats to get rid of Trump. All the pieces are starting to come together, and if the president has four more years, you bet some heads are going to roll.

As expected, the leftist nut jobs are plotting a “confiscate all guns campaign” as if on cue after the Charlotteville tragedy. For months, the left has been foaming at the mouth to overthrow President Donald Trump, and now, they are whipping their useful idiot supporters into a frenzy to take your guns. While this is nothing new for the left, it’s how they are planning to take them that will blow you away. You don’t want to miss this. […]

First Lady Melania Trump has officially moved into the White House, along with 11-year-old Barron, the son she shares with President Donald Trump. As the family disembarked from Air Force One upon arriving at Andrews Air Force Base in Maryland, there were two other visitors in tow: Melania’s parents, Viktor and Amalija Knavs. As soon as the first lady’s father stepped off the plane, onlookers immediately noticed one striking detail about him. […]

Several Americans thought that Ted Cruz’s plan to use El Chapo’s seized drug money to build President Donald Trump’s border wall was a great idea, but it doesn’t look like that’s happening. Unfortunately for the liberals who thought that this meant the end of Trump’s wall, they couldn’t have been more wrong. In fact, they’re really going to hate the newest funding idea to raise the needed $21 billion. […]

A stunning CCTV video from Fulton County’s State Farm Arena shows that on Election Day after poll watchers were dismissed, four Democrat election officials allegedly stayed behind to count ballots. You don’t want to miss this. […]

Michigan State Rep. Cynthia Johnson lost her mind during the hearing on election irregularities and attacked an IT specialist who had testified to witnessing election officials allegedly misusing the Dominion tabulators at the TCF Center in Detroit. That’s when the Indian immigrant, who was also a GOP poll watcher, utterly torched Rep. Johnson. Don’t miss this. […]

Rep. Mo Brooks, R-Ala., is causing the Democrats to freak out. Brooks made it known on Wednesday he is standing with President Donald Trump by vowing to challenge the Electoral College on January 6. You don’t want to miss this. […]

Austin’s Democrat mayor released a video warning residents to “stay home.” There was just one problem, however, as people quickly realized what he was doing while filming the message, and it didn’t take long for the mayor to get called out. Don’t miss this. […]

Stacey Abrams lost her bid to become Georgia’s governor. The failed candidate also founded a group to register voters in the Peach State. Now, as Georgia is under the microscope as one of the states where fraud allegedly took place, the Abrams associated group is under investigation for a number of things. You don’t want to miss this. […]

Patty McMurray is a resident of Michigan who volunteered as a poll watcher at the TCF Center in Detroit. McMurray set the Michigan State Senate hearing on fire when she dropped a bombshell about the military ballots. Don’t miss this. […]

The Michigan State Senate held a hearing on election oversight on Tuesday. The biggest bombshell was dropped by one IT specialist who was contracted to work for Dominion Voting Systems at the TCF Center in Detroit. “I witnessed fraud all night long,” Melissa Carone claimed. She then outlined what she allegedly saw on Election Night. […]

President Donald Trump is refusing to surrender. He really angered Democrats and supporters of Joe Biden on Monday night when he posted one analyst’s data that allegedly shows a rigged election. The Democrats do not want any Americans to see or believe it. Don’t miss this. […]

On Monday, Rudy Giuliani and Jenna Ellis, who represents the Trump campaign, were invited to give evidence of alleged voter fraud and irregularities in Arizona. One of the more disturbing allegations came from an anonymous Pima County tech provider who claimed 35,000 votes appeared out of thin air on Election Night. Don’t miss this. […]

Another bizarre turn of events in the 2020 presidential election was uncovered over the weekend. A man who previously worked as Kamala Harris’ “official campaign photographer” was employed as a Dominion Representative who worked on Election Night in Floyd County, Georgia. You don’t want to miss all the details of this connection. […]