Donna Brazile, the Fox News contributor and former interim chair of the Democratic National Committee, is on the record wishing Roger Stone ill-will. “Go to f*ckin’ jail. Go to jail, go to hell. I hope he roasts in hell!” Brazile exclaimed. Now, Tomeka Hart, the lead juror in Stone’s case, has been caught with ties to Donna Brazil and the DNC. Stone’s legal team is demanding a mistrial. You don’t want to miss this.

Anyone who has ever turned up for jury duty knows the first step is called “voir dire.” This is the process where the attorneys ask a series of questions so they can select the most impartial jury. So, in a trial where the defendant is Roger Stone, a potential juror should be disqualified if they had ties to the DNC or had a strong anti-Trump bias.

Tomeka Hart, the Roger Stone lead juror, has both.

It all started late yesterday afternoon when a few internet sleuths investigated Hart’s social media accounts after CNN reported that she was speaking out. Of course, CNN failed to check out her background.

Stone, who was indicted January 24, 2019, argued in the lead up to his trial that he would be unable to receive a fair trial in Washington, D.C., due to its left-leaning populace. He was spot on.

Hart declared Wednesday that she was going to “stand up” for the prosecutors pushing for a seven to nine-year imprisonment for the 67-year-old Stone, which is a virtual death sentence. What is shocking is the level of Hart’s Trump Derangement Syndrome and her obsession with “destroying” Roger Stone prior to her ever being on the jury.

Tomeka Hart is pictured with Donna Brazile, and she has extensive ties to the DNC. She ran for congress as a Democrat in 2012. After Donald Trump got elected, Hart became unhinged.

Hart was a perpetrator of the grand Russian collusion conspiracy theory, but her delusions didn’t stop there. Her Twitter feed shows dozens of references to Trump, many of them with links to negative stories about the Republican. In a Twitter post on August 19, 2017, Hart quoted a tweet referring to Trump as the “#KlanPresident,” in an apparent reference to the KKK.

However, her real obsession was with Roger Stone.

In January 2019, Hart tweeted out a series of articles about the Roger Stone arrest and his indictment. On January 25, 2019, she tweeted, “Brought to you by the lock her up peanut gallery,” and included an article laying out Stone’s indictment. 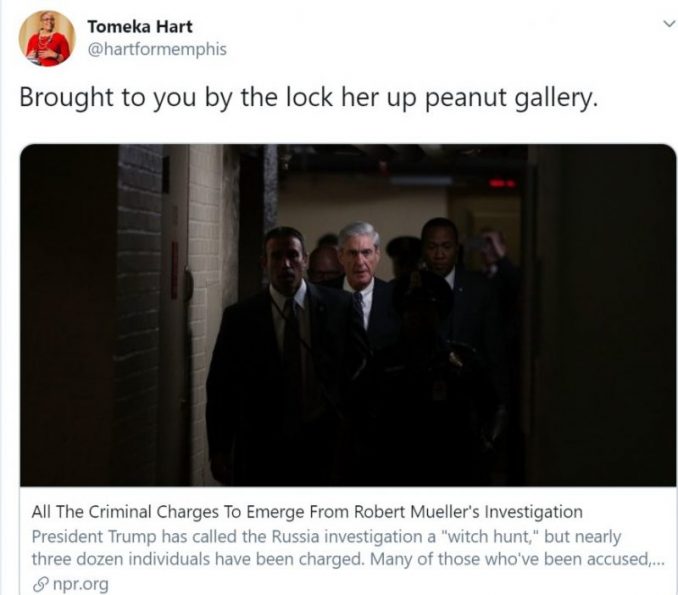 Tomeka Hart also had no problem with the atrocious pre-dawn raid on Roger Stone by the FBI. Most people remember CNN showing up seemingly tipped off by deep state actors inside the FBI. Hart retweeted a post from CNN analyst Bakari Sellers criticizing Stone defenders who were upset over the circumstances of his arrest on January 25, 2019. 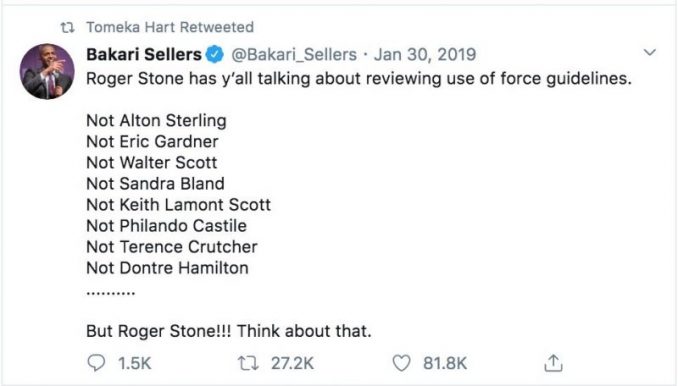 In August last year, Hart also tweeted that anybody who supported President Donald Trump was racist.

“Then stop being racists. Co-signing and defending a racist and his racist rhetoric makes you racist. Point blank,” Hart wrote on Twitter while linking to a piece in the Atlantic of Trump supporters complaining about the label constantly being lodged against them.

Then stop being racists. Co-signing and defending a racist and his racist rhetoric makes you racist. Point blank. https://t.co/nFHYy8Nm7n

But believe it or not, it gets worse. While Hart was serving on the jury, she tweeted about the president’s impeachment, sharing a letter to the editor in the New York Times, requesting the outlet use more direct language to accuse Trump of committing a crime in his dealings with Ukraine.

“A plea from 33 writers: Please use language that will clarify the issues at hand.

Please stop using the Latin phrase “quid pro quo” regarding the impeachment inquiry. Most people don’t understand what it… https://t.co/AmKW4Zqxu5

Then, there are tweets from 2017 which also add to the case that Tomeka Hart had no business being on the Roger Stone jury let alone as the “lead juror.” This woman is totally unhinged.

“TRUMP, PUTIN, AND THE NEW COLD WAR What lay behind Russia’s interference in the 2016 election—and what lies…” tweeted Hart with a link to an article that features bogus conspiracy theory that Russia helped Trump win the 2016 election.

What lay behind Russia’s interference in the 2016 election—and what lies… https://t.co/cnf7u327vw

Hart ending up on that jury is a tad suspect, and many are making the case that it would not be a stretch to say she was a DNC plant.

The fact that Tomeka Hart also felt the need to speak out after AG Bill Barr intervened in the excessive sentencing by the four Mueller team prosecutors is another red flag. Hart admits she was heavily influencing the jury.

“It pains me to see the DOJ now interfere with the hard work of the prosecutors,” Hart wrote on Facebook. “They acted with the utmost intelligence, integrity, and respect for our system of justice,”

She said the prosecutors did a “masterful job” presenting their case.

“As foreperson, I made sure we went through every element, of every charge, matching the evidence presented in the case that led us to return a conviction of guilty on all 7 counts,” she wrote.

This case isn’t about Roger Stone. This is about President Donald Trump. This is the Democrats and their deep state coconspirators last chance to validate the Mueller investigation was not a “witch hunt,” and that’s why Roger Stone must be railroaded and end up dying in a prison cell.

Texas Attorney General Ken Paxton appeared on the “Louder with Crowder” podcast and gave an important update on the Supreme Court lawsuit. Paxton was on his way to meet President Donald Trump in the Oval Office and asked Americans living in red states to help him do one thing. Don’t miss this. […]

Nancy Pelosi and Dr. Anthonty Fauci are aligned. They both say we must keep the economy shut down for a much longer period of time, but they aren’t telling Americans the entire truth. Meanwhile, the Democrats once again blocked a vital piece of legislation to aid small businesses that pay many American workers. The economy is already teetering on a point of no return. Don’t miss this. […]

Adam Schiff: America Will Not Survive Another Four Years With Trump, Gets Torched

Rep. Adam Schiff of California is giving his opinion on President Donald Trump. “Shifty” Schiff contends America won’t “survive another four years” if the president is re-elected. Even though the economy is roaring, Schiff was asked if the president will be re-elected and said, “That’s not gonna happen.” Well, immediately he got torched. You’ll love this. […]