Meghan Markle has made a total mess of her life. Her father Thomas Markle has been dragged into a lawsuit that the Trump-hating Duchess started. In fact, Mr. Markle has been called to testify about some extremely troubling accounts of Meghan’s disgusting behavior that are now coming to light. You don’t want to miss this.

Late last year, Meghan Markle, who was upset that she was getting negative press, started a lawsuit against one of the U.K.’s biggest media outlets: the Mail on Sunday. The “Suits” star didn’t appreciate the entire truth about her disturbing behavior toward her father to be made known.

“The Duchess of Sussex launched legal action against the Mail on Sunday last year after it published extracts of a letter she wrote to her father in August 2018. Meghan, 38, has accused the newspaper – the sister paper of the Daily Mail – of breaching her privacy, her data protection rights, and her copyright when it published extracts,” Daily Mail reports.

This all centers on a handwritten letter Meghan sent to her father in which she painted him as a terrible person. Meghan wrote the note in flawless style knowing it would be leaked to the press by her friends. This was a failed PR move on the former actress’s part after she was exposed as a total fraud and non-caring daughter who left her father to have heart surgery all alone and not once asking about his health.

Meghan’s phony letter was to paint her father as the villain when media outlets were just reporting the truth.

“Your actions have broken my heart into a million pieces not simply because you have manufactured such unnecessary and unwarranted pain, but by making the choice to not tell the truth as you are puppeteered in this. Something I will never understand,” the letter read.

“So the week of the wedding to hear about you having a heart attack through a tabloid was horrifying. I called and texted…I begged you to accept help — we sent someone to your home…and instead of speaking to me to accept this or any help, you stopped answering your phone and chose to only speak to tabloids,” the letter read.

Mr. Markle showed text messages proving Meghan was allegedly lying about him all along. In one text dated May 17, 2018, one day before her wedding, he writes: “I’ve done nothing to hurt you Meghan or anyone else … I’m sorry my heart attack is … any inconvenience for you.”

Then, in her phony letter, Meghan writes: “You ignored my calls…leaving me before my wedding worried, confused, shocked, and blindsided.” 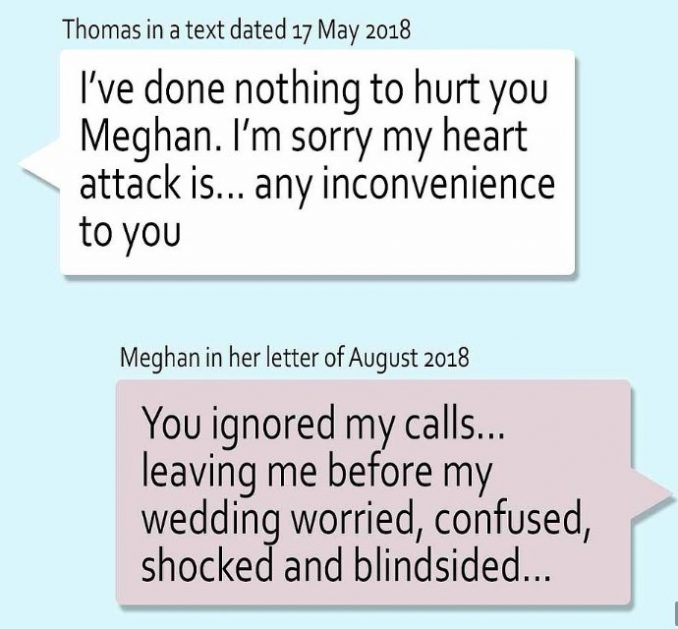 The big problem is that Thomas Markle says it’s a pack of lies, and he can prove it.

Legal documents seen by The Telegraph have confirmed that Thomas Markle’s evidence will form part of the Mail on Sunday’s defense against the Duchess’s legal action for breach of privacy, copyright and data protection.

The court papers disclose text messages sent from Mr. Markle to his daughter and lay bare her lies and the deteriorating relationship between the pair at the time of her wedding to Prince Harry was due to Meghan, not her father.

The documents, seemingly written with Mr. Markle’s co-operation, justify the publication of excerpts from the letter and his response to it last February, insisting it was “necessary for the sake of truth, fairness, and Mr. Markle’s reputation, and so that the public should not be misled.” It adds: “The Claimant’s privacy rights do not extend to silencing her father.”

Meghan wasn’t finished destroying her own father. She then got unnamed “friends” to trash him in People Magazine.

“As well as confirming the existence of the letter, the unnamed ‘sisterhood’ told People that Mr. Markle had never contacted his daughter, claiming that the Duchess was ‘calling, texting, even up to the night before the wedding’ on May 19, 2018, after he had to pull out following an emergency heart procedure,” The Telegraph reports.

Lawyers for the newspaper alleged that Meghan had “knowingly” allowed her friends to leak details of the letter to the magazine – effectively that she had helped to breach her own privacy.

“If the case goes before a judge, the paper said it would ask for Meghan to be forced to hand over all communications in which she had ’caused or permitted her friends to provide information about her to the media or to seek to influence what is published about her,'” Daily Mail adds.

That’s right. Meghan Markle has a long history of “ghosting” people close to her, and now all her extraordinarily bad behavior toward her own family is coming to light. It’s one thing to plant news stories to make yourself look good, but it’s totally despicable to trash your own father just because the press is telling the truth.

It should be pointed out that Thomas Markle made sure Meghan had every advantage growing up. She attended an exclusive all-girls Catholic high school, and he also paid for her college education. So, it’s no wonder the Queen and all of Prince Harry’s family are concerned. Meghan is now ghosting them, as she did her own father.

Unfortunately, she also has a nasty habit of allegedly telling untruths even about those who she is supposed to love. So, stay tuned. This Megxit drama is only going to get worse for the Hollywood grifter as more and more about her behavior comes to light.