Michelle Obama is being hailed as “the savior” of the Democratic Party after Monday night’s speech at their virtual convention. The former first lady was quick to bring up “kids in cages.” Americans “watch in horror as children are torn from their families and thrown into cages,” she said, reviving a claim that produces a strong emotional reaction among left-leaning voters. Well, that’s when she got utterly destroyed. You’ll love this.

It’s probably one of the biggest misconceptions out there. This notion that President Donald Trump is such a racist, is such a bigot who hates brown people, that he made sure kids at the border were “put in cages.”

Democrat voters constantly point to this wild accusation as proof Trump is just like “Adolf Hitler.” It’s a huge talking point that the DNC brain trust knew must be reiterated at the convention. And who better than the Democrat queen herself, Michelle Obama, to recite that false claim once again.

“They see our leaders labeling fellow citizens enemies of the state while emboldening torch-bearing white supremacists,” Michelle claimed. “They watch in horror as children are torn from their families and thrown into cages, and pepper spray and rubber bullets are used on peaceful protestors for a photo-op.”

Those are three huge lies the Democrats love to cite, and Michelle brought them up in one sentence.

Here are the facts.

Moreover, the neo-Nazis were not the only violent group in Charlottesville. The “clash” was not with those “standing against” hate peacefully, but with violent, black-clad Antifa extremists.

As to “very fine people,” Trump had been referring to peaceful protests both for and against the removal of a statue of Confederate General Robert E. Lee.

Trump made it clear, if you read the entire context, that he condemns neo-Nazi white supremacists, but he also wanted to convey there were other protesters there who were only there to peacefully protest the taking done of the monuments and had nothing to do with the white supremacists. 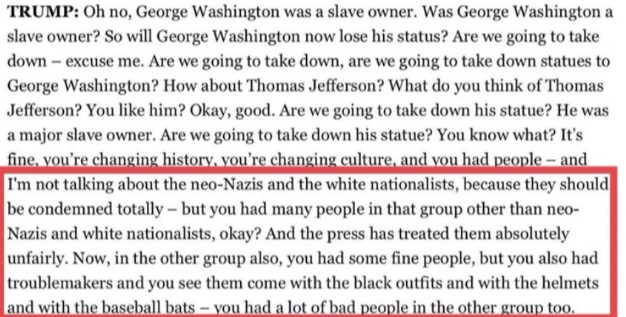 Then, we have the “kids in cages” claim. Immediately, conservatives pointed to the Associated Press fact-check that proves Michelle Obama was lying.

A fact check by the Associated Press said:

THE FACTS: The reference to cages is misleading and a matter that Democrats have persistently distorted.

Trump used facilities that were built during the Obama-Biden administration to house children at the border. They are chain-link enclosures inside border facilities where migrants were temporarily housed, separated by sex and age.

At the height of the controversy over Trump’s zero-tolerance policy at the border, photos that circulated online of children in the enclosures generated great anger. But those photos — by The Associated Press — were taken in 2014 and depicted some of the thousands of unaccompanied children held by President Barack Obama.

The new lie the Democrats continue to sell has to do with this claim that Trump ordered “pepper spray and rubber bullets” so he could take a photo-op.

Attorney General Bill Barr, who is no one’s fool and will not make statements unless he can back them up with facts, set the record straight. The 56-year-old former first lady was referring to Trump’s walk across the Rose Garden to riot-scarred St. John’s Episcopal on June 1.

“The president is the head of the executive branch and the chief executive of the nation, and should be able to walk outside the White House and walk across the street to that church,” Barr said.

He told reporters, however, the decision to clear the park and expand the fence perimeter around the White House had been made before Trump’s decision to go to the church, where he posed with a Bible in his hand.

There was “no correlation” between the two events, he said. “I think it was appropriate for us to go over with him. I don’t necessarily view that as a political act.”

The protesters were told three times to back up away from the White House on the morning of June 1. This order was ignored and the “protesters” started to throw “projectiles” like “bricks and frozen water bottles” at U.S. Park Services and police officers present, McEnnany said.

This was done to keep the already partially burned church, which is a historical building, out of harm’s way. McEnnany also said there was “no military presence,” however, the National Guard had been deployed across Washington, D.C.

“It was powerful and important to send a message that the rioters, the looters, the anarchists, they will not prevail — that burning churches are not what America is about,” McEnnany said about Trump’s walk to the burned church.

The Secret Service found hidden containers of “bats, bricks, and glass bottles” near the White House, she said. All of these things occurred before the president ever decided to walk a few feet to the church.

Let’s be clear: there was nothing peaceful about the rioters around the White House. Just 48 hours prior to Trump’s walk to the church, the Secret Service made a total of seven arrests on Pennslyvania Avenue. The agents confirmed the arrests were made close to the White House.

In fact, a total of 11 Secret Service officers were taken to hospitals in the D.C. area on May 29, according to officials. If the president of the United States can’t walk across the Rose Garden to the nearby church, due to “protesters,” then we have no law and order left.

President Trump made that walk to ensure the American people, who were watching as rioters ran rampant across the nation, that he will not be scared into submission. Holding up the Bible, he conveyed trust in God. Leave it to Michelle Obama and her cohorts to turn that into something perverse. The only thing they can count on are lies, and Americans are too wise to be fooled by them.

Liberal filmmaker and writer Kate Imbach decided to embark on a creative study of First Lady Melania Trump. Now, she is publicly proclaiming the shocking secrets that she found hidden in Melania’s photos. […]

Liberal Nurse Wishes For Death Of Sarah Sanders, Dana Perino Shuts Her Up With 7 Words

There has seemingly been no shortage of lefties who get their panties in a wad over White House press secretary Sarah Huckabee Sanders’ direct approach. The most recent culprit was liberal nurse Judy Cole, who publicly wished death upon the working mother-of-three. Dana Perino, a former white house press secretary herself, has come out swinging against Cole’s unwarranted attack on Sanders, effectively shutting up the leftist nurse with just seven words. […]

Dan Bongino was invited to give his testimony on Capitol Hill on Wednesday as Congress held hearings on police brutality. The former NYPD officer and Secret Service agent wasted no time to destroy the “defund the police” campaign which is backed by Black Lives Matter. In fact, Dan was so devastating to their “cause” they went nuts. You’ll love this. […]