Rep. Ilhan Omar is denying allegations that she has separated from the father of her three children and second husband Ahmed Hirsi. She is also denying that she broke up the marriage of her well-paid consultant Tim Mynett. However, Hirsi is talking with sources and claiming he will not go to jail for Ilhan with accusations of marriage fraud, tax fraud, and immigration fraud hanging over her head. That’s not all he is talking about. There’s so much more. Don’t miss this.

The website that has been accurate in its reporting on the many scandals of Ilhan Omar is Powerline, and their reporter Scott Johnson has appeared on Fox News several times to discuss his findings.

Scott Johnson is not just some reporter who broke the Omar scandals. He is also a well-respected attorney, who is a member of the Claremont Institute. His work has appeared in magazines including National Review and the Weekly Standard as well as newspapers including the New York Times, the New York Post, the Minneapolis Star Tribune and the St. Paul Pioneer Press.

So, when Powerline’s Scott Johnson claims to have spoken with sources close to Ahmed Hirsi, people listen.

In his latest piece, Johnson reports: “Omar’s denial of the affair is a lie that is both obvious and bald-faced. She has therefore run from the tabloid newspapers and the local media as they have sought to report on the scandal. See, for example, Ebony Bowden’s New York Post article and accompanying video Ilhan Omar dodges questions from The Post about alleged affair.”

Johnson is right. Omar denying the affair is comical. The Daily Mail caught up with Hirsi who refused to deny he was living separately nor would he deny they are headed for divorce.

“Hirsi, a senior policy aide to a Minneapolis city councilwoman, is reportedly bouncing between friends’ houses and stays at the luxury condo when Omar isn’t in town, with the kids also spending time with a grandfather, the source said,” the New York Post reports.

“In the past three weeks I have circled back to interview sources whom I have found to be highly reliable in the Omar saga,” Johnson writes. “They open a window onto the scandals from the perspective of Ahmed Hirsi, her long-time partner and the father of her three children.”

According to sources, Hirsi is telling friends:

• that he will not go to jail for Omar;

• that while Omar did indeed marry her brother (Ahmed Elmi) for fraudulent purposes, Hirsi did not know at the time that she had married Elmi;

• that Omar is threatening Hirsi he would be in trouble along with her if the truth were to come out;

• that Omar has asked him to state publicly that all is well with their marriage even though it is completely done and finished; and

• that in fact they are living apart and have been divorced under Islamic law (although they remain legally married).

Having humiliated Ahmed Hirsi by her affair with Tim Mynett, Omar now wants Hirsi to perform public relations services for her to suppress the scandal. That is cold. That’s how Ilhan Omar rolls. One may infer that there is a good reason why Hirsi has never spoken up on Omar’s behalf in any of these scandals.

Hirsi’s knowledge of Omar’s conduct is knowledge of her wrongdoing. It implicates him, which for a man who just wants to live his life quietly and who by all accounts is the one really raising the three kids, is scary stuff. Also, Ilhan claimed Ahmed Hirsi’s name before “becoming a citizen” was Ahmed Aden.

What? It seems as if everyone involved in this Omar saga is hiding something.

“In 2002, when I was 19 years old, Ahmed Hirsi (whose name before he received citizenship was Ahmed Aden), the father of my children and love of my life, and I, applied for a marriage license, but we never finalized the application and thus were never legally married,” Ilhan wrote in a letter to the Star Tribune.

So let’s get this straight. Ilhan claims she was “married” in 2002 to Ahmed Aden, who is now called Ahmed Hirsi, but they never got legally married until 2018. Then, she suddenly gets married “for real” in 2009 to a man named Ahmed Nur Said Elmi, who just happens to have the same surname as Ilhan’s father.

Omar’s father’s name change was reported by Alpha News, Minneapolis-based news cite which picked up on an article on Ilhan written by Minneapolis’ City Page. The reporter’s name is Cory Zurowski, and Cory knows he was made to change her father’s name in his report after ole Ilhan realized it could lead to disaster.

Omar’s real name according to numerous sources is Ilhan Nur Said Elmi. Somali children are usually given a three-part name. The first name is a chosen name. The middle name traditionally is the first name of the child’s father. The last name is the child’s paternal grandfather’s first name.

Ilhan entered the United States as a fraudulent member of the “Omar” family.

“On October 22, 2008, the U.S. State Department stopped accepting applications for the Priority 3/Refugee Family Reunification program — the process by which refugees can apply for asylum if one family member is already a legal U.S. resident. State halted the program because DNA testing — primarily of Somalis — had concluded that perhaps 87 percent of applicants were fraudulently claiming family relationships,” Powerline reports.

Ilhan’s sister Sara Noor identified her father as “Nur Said,” which is not “Nur Omar” which is the name Ilhan is claiming today. 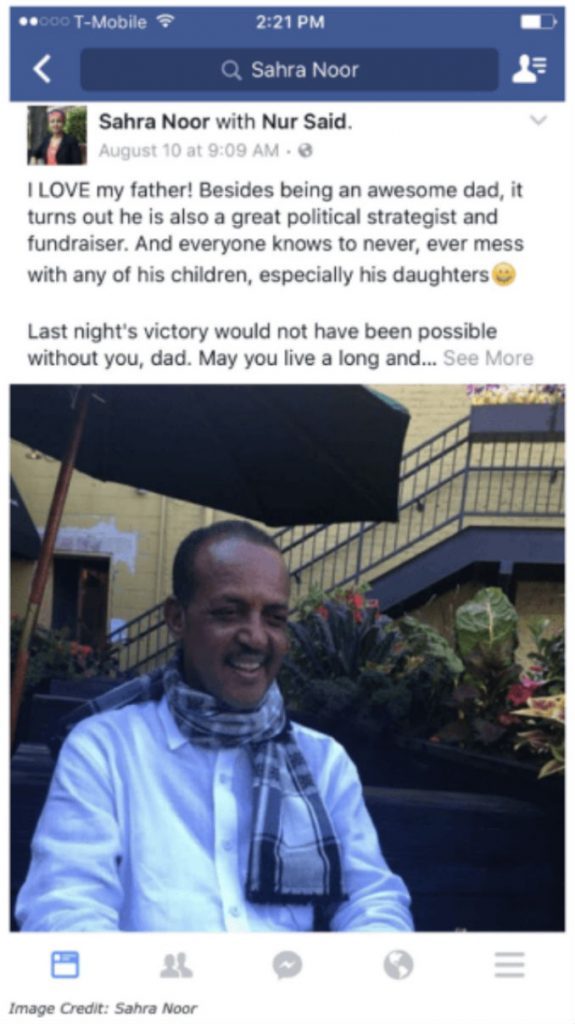 If you are frustrated by this story and the inaction by the mainstream media in reporting on it, join the club.

As concerned Americans, all we can do is keep Rep. Ilhan Omar’s many scandals in the news. The Minnesota Congresswoman is hoping beyond hope that all of these numerous scandals will blow over. It’s time for Ilhan to come clean. Being a member of Congress of the most powerful nation on earth isn’t something you fake your way through.

It’s not something you should be able to gain by fraudulent means. We can’t overlook Ilhan continuing to perpetuate the fraud by gaming the system in her marriages and her taxes. Now, she is gaming every American as a United States Congresswoman. America is the most charitable country on earth, but we won’t be played as fools for very long.

A 9-year-old white girl was repeatedly beaten, sexually assaulted, and emotionally tormented by a group of migrant children at her school. However, instead of reporting it to the authorities, the school decided to cover up the sickening abuse, giving outraged parents a 5-word, infuriating excuse. […]

A Muslim pre-school teacher took to social media to rant about her racist disdain for non-Muslims and even celebrating innocent civilians’ deaths. When she arrived for class this morning, however, she was greeted by a perfectly appropriate surprise suitable for such a religious bigot. […]

“White people shouldn’t breed,” screamed Rezzas Abdulla as he leaned down into the stroller of a frightened 9-month-old Layla-Jean. What this disgusting man did to the baby next was pure evil as her mother watched in horror, and it has many scratching their heads and asking, “How could this happen?” […]

Conservative radio host Dan Bongino vowed to defy officials who passed a mandatory mask order this week in his county of residence. You don’t want to miss this. […]

Oprah Winfrey has come aboard as a producer of a new film that claims the first Americans fought the Revolutionary War to “preserve slavery.” This is such a blatant lie that immediately Winfrey got utterly torched for backing this slander against America. You’ll love this. […]

In case you missed it, Lafayette Square Park in Washington, D.C. has been renamed “Black Lives Matter Plaza,” and that’s where this recent attack happened. A black Trump supporter got smacked hard in the face by one Black Lives Matter protester. Well, immediately, the BLM protester got a rude awakening he never saw coming. You’ll love this. […]

The mainstream media applauds when “protesters” tear down monuments and statutes, but when a Trump-supporting couple paints over a Black Lives Matter “street mural,” the liberal-leaning District Attorney goes nuts in ways that will make your head spin. Don’t miss this. […]

CNN’s Don Lemon delivered a message to all Americans on Tuesday night. Claiming his “slave ancestors” built this country for “free,” Lemon lamented they aren’t memorialized on statues. He added: “If they are going to put someone on Mount Rushmore, considering the history of the country, the first black president should be front and center.” Well, that’s when he got an epic smackdown he never saw coming. You’ll love this. […]

Just how low are Meghan Markle and her sidekick husband Harry willing to go to pander to the Black Lives Matter movement? Well, the “super woke” duo has now burned the biggest bridge to date. They threw Harry’s grandmother under the bus by making the most ridiculous accusation. Citing “racism” in the past of British colonies, Harry egged on by Meghan tried to destroy his own grandmother. Well, that’s when they got a brutal smackdown. You’ll love this. […]

Yusra Khogali is one of the co-founders of Black Lives Matter Toronto. Khogali is on the record saying: “White people are subhuman and have genetic defects.” But that’s not all. The mainstream media is trying to ignore their possible ties to Islamic extremists. Don’t miss this. […]

Robert De Niro had no problem taking more than a dozen loans from the president’s Paycheck Protection Program (PPP) totaling 28 million dollars. The 76-year-old Trump hater used his restaurant and hotel businesses to scam the money meant to go to Americans who were facing bankruptcy due to the COVID crisis. Well, poor Bobby was just made to regret it. You’ll love this. […]

Charlie Daniels passed away on Monday morning. He was 83 years old. Daniels was an ardent supporter of President Donald Trump and a real patriot. He spoke out often about the times we are living in and loved to call out the Democrats and the radical leftwing “protesters.” Daniels had some parting words that are going viral and are causing the leftists to go nuts. Don’t miss this. […]

This disgusting crime happened in Cape Girardeau, Missouri, which is famous for being the hometown of Rush Limbaugh. A black man stopped his car and proceeded to sucker punch a white boy who was break-dancing, and it was all captured on video. But that’s not all. You don’t want to miss this. […]