Rosie O’Donnell was so fired up over the Democrats announcing an impeachment inquiry that she decided to take a poll on Twitter. The 57-year-old excitedly posted her very own impeachment poll, then waited several hours to see if Americans voted “hell yes” for impeachment or “hell no” against it. That’s when things went all wrong for poor Rosie as Americans gave her a big reality check. You’ll love this.

Rosie O’Donnell is a rabid Twitter user, and it seems like she is on the social media platform 24/7. O’Donnell has over one million followers, and most people would guess those followers would be made-up of her fans and leftwing activists.

Rosie is caught up in the leftist impeachment frenzy, so she had the bright idea of posting a poll on her Twitter feed that read: “Should Trump be impeached?” Under that question were two options, “hell yes” or “hell no.”

If you have ever been on Twitter, you probably have seen some of these self-made polls. Rosie felt safe posting it on her own Twitter feed, and it’s highly likely she wasn’t looking for a scientific poll. Rather, the Trump-hating celebrity was caught up in her own little impeachment celebration, and she wanted to keep the party going as long as possible.

The poll had a time limit, so after several hours the time ran out.

This was the moment of truth she had been waiting for, except that’s when she realized something had gone horribly wrong.

Fifty-eight percent of respondents voted “hell no,” while 42 percent voted for the alternative of “hell yes.” Exactly 272,582 people voted in total. How could this possibly happen on her own Twitter feed, Rosie must have thought. 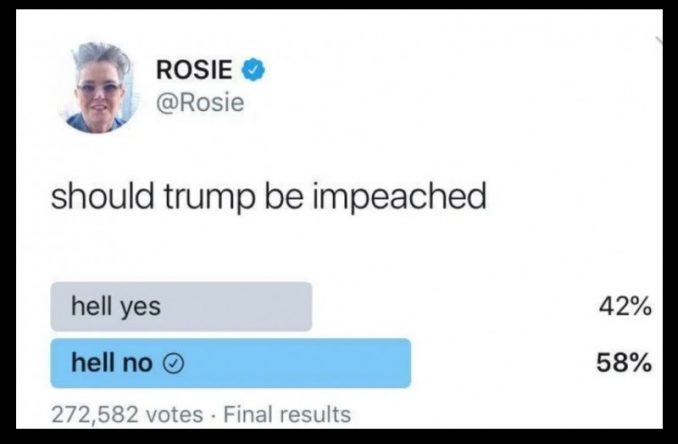 “O’Donnell has since deleted the poll, presumably after she failed to get the result she wanted,” Breitbart reports. “The 57-year-old comedian is one of the many Hollywood figures drooling at the prospect of the president being impeached, after Democratic Speaker of the House Nancy Pelosi announced last week that she would initiate formal impeachment proceedings over a telephone conversation Trump had with Ukranian President Volodymyr Zelensky.”

Much of her Twitter feed is dedicated to demanding Trump’s imminent impeachment, with Pelosi arguing Trump “abused his power by pushing Ukraine to investigate his political rival, Joe Biden.”

Poor Rosie’s reality check on impeachment was far from over. Americans then lit up O’Donnell’s Twitter feed.

You've got something on your face.

No… You're gonna need a mirror.

@Rosie what happened to your poll? Apparently the patriots in this country out number the fools who want socialism. Don't y'all know #SocialismKills
Rosie O’Donnell Deletes Her Twitter Poll Showing 58 Percent Say ‘Hell No’ to Impeachment https://t.co/OAjCnQlXX4

“RADICAL_LEFTISTS who believe their own #PROPAGANDA always overestimate the strength of their following. Once they get OUTSIDE of the MSM protective shield, their falling begins to fade away quickly,” tweeted “Free Speech/ Civil Liberties Review.”

#RADICAL_LEFTISTS who believe their own #PROPAGANDA always overestimate the strength of their following. Once they get OUTSIDE of the MSM protective shield, their falling begins to fade away quickly.https://t.co/wvJUSKyK7Z

Rosie, like most Hollywood leftists, was a huge proponent of the Mueller investigation. Back in November 2017, O’Donnell talked for the first time publicly on the Seth Meyers show about Trump’s 2016 election.

“As bad as everyone feels, and they have felt since November 8th, I know for me I’ve been in this severe depression. Although I’d like to say that, after your show, I’m going to get a Bob Mueller tattoo ‘cause I love him!” O’Donnell said, also adding that she would put the tattoo “right over” her heart.

The Trump critic continued to express her affection for Mueller, saying, “I’m so in love with Bob Mueller. I want to get posters. I want to meet him. I just think he is it.”

After Meyers mentioned that he sees Mueller as resembling a “severe old man,” O’Donnell quickly interjected, “No, he looks, to me, like Superman. Like Captain America. Like justice has finally arrived back on our shores and we are going to right ourselves again.”

How can these liberals not see, even though they hate Donald Trump, that there’s something fishy about the information they have been getting from their mainstream media sources?

Now with this Ukraine scandal, which has identical footprints to the Russia hoax, how do they so quickly buy into the Democrat talking points? Haven’t they seen this movie before?

It’s like they are stuck in an alternate reality where Donald Trump is the big bad villain, and lies and propaganda are being drummed into their heads by Big Brother from the novel 1984. They are unable to think for themselves. It means for three years they spent all their time wasted on untruths that manipulated their emotions.

That’s why Rosie had to delete that poll and pretend like it never happened. The alternative is to start asking the right questions which lead you to the truth, and then instead of deleting those answers, muster up enough courage to admit you’ve been duped for over three years by the real bad guys in government.

As tensions between the United States and North Korea continue to escalate, totalitarian dictator Kim Jong-un shows no sign of backing down from his threats of aggression, even though recent reports of fake weaponry and failed missile tests would suggest that he is all bark and no bite. So, he will surely be panicking once he hears what a military pilot just said about what the U.S. has in store for our North Korean adversary. […]

After Mad Maxine Waters Calls for Violence, She Gets Worst News of Political Career

Rep. Maxine Waters (D-CA) ordered protesters to harass President Donald Trump’s officials and supporters. The reckless words shocked millions of Americans. Now, she is eating her words as she gets the worst news of her political career. […]

Newly released text messages from corrupt FBI agent Peter Strzok have sent a shockwave throughout Washington, D.C. after they revealed that Barack Obama’s Attorney General Loretta Lynch was keeping a dirty secret for Hillary Clinton. You don’t want to miss this. […]