President Donald Trump is between a rock and a hard place when it comes to juggling the health of the American people versus allowing the country to dive into another Great Depression. However, we have now discovered shocking information on coronavirus deaths in the hotspot of New York City. According to the data, doctors have found the numbers are being “cooked.” Rush Limbaugh further exposes hard truths Americans need to hear.

Now, let’s look at the data coming from New York.

You can see why this is a huge issue. One expert has weighed in claiming some of those deaths with “underlying conditions” have nothing to with coronavirus.

“The mistake is being made worldwide to report virus-related deaths as soon as it is established that the virus was present at the time of death – regardless of other factors. This violates principles of infectiology: only when it is certain that an agent has played a significant role in the disease or death may a diagnosis be made,” writes Dr. Sucharit Bhakdi, Professor Emeritus of Medical Microbiology at the Johannes Gutenberg University Mainz. 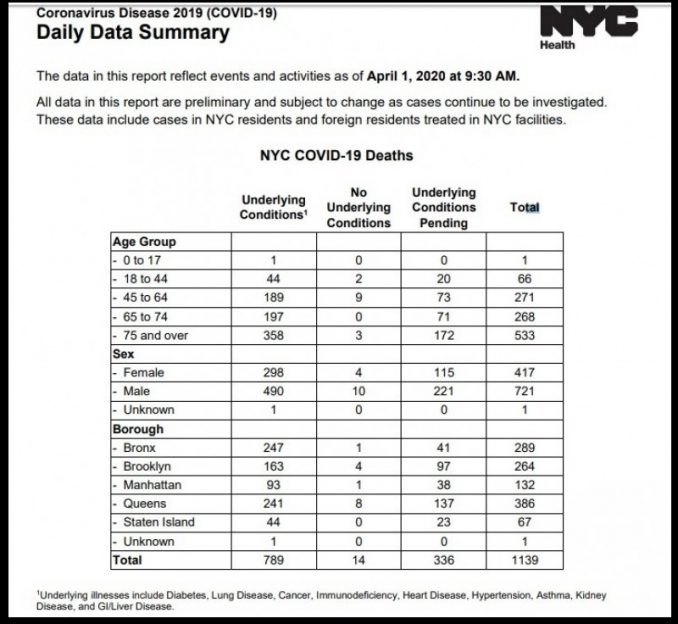 NYC numbers are cooked so that “if a patient died, and they tested positive for COVID-19, book it.”

Let’s say a patient comes in dead on arrival due to heart failure. During the post-mortem exam, the doctor will test the blood for COVID-19. If it’s positive, then the patient is added to the COVID-19 list of deaths with “underlying conditions.”

Dr. Bhakdi was writing this letter to Germany’s Angela Merkel to warn her that data is being skewed in the hopes of making the pandemic appear extremely virulent with a high mortality rate.

He adds: “How, then, is a distinction to be made between genuine corona-related deaths and accidental virus presence at the time of death?”

“It is important to differentiate promptly the true epidemic from an epidemic of false claims and potentially harmful actions, ” he writes.

Even more alarming is that the Centers for Diese Control (CDC) is basing its forecast of 100,000 to 240,000 deaths by the virus in America on the New York City data.

Part of that has to do with those in our society who have been infected and are asymptomatic. All medical experts agree there are potentially thousands and thousands who were infected and never knew it. That matters because the real mortality rate (percentage of deaths) can only be ascertained by adding those numbers to those infected and recovered.

That would probably put the true mortality rate at a very low number.

Rush Limbaugh also weighed in and exposed some hard truths.

Limbaugh cited an article in The Federalist by Ben Domenech, saying: “We face an unprecedented situation — not a global pandemic, we’ve seen those before, but a modern capitalist economy that turned itself off for potentially more than 60 days, on purpose.”

“This is exactly my point,” Limbaugh adds. “What are we doing? We have purposely shut down capitalism. We’ve shut down the largest economy in the world. We’ve shut down the economy the world needs. The biggest roaring economy the country has ever seen, we’ve shut it down. It took three years, only three years to build this economy up from the tepid state the Obama administration left it in, and now we’re right back there. Do you realize it’s just taken two months to take this economy back to where we were in December of 2016?”

Limbaugh says we need a date to end the shutdown before its too late.

“And Trump comes along, Make America Great Again, saying to hell with [Obama’s recession]. And now we just shut it down. We just turned it off, and we did it on purpose. And Mr. Domenech says, ‘Uncertainty crushes hope. So the question on the minds of our leaders should be: how do we give citizens more confidence that we can, and will, turn the economy back on?”’ Rush said.

“It is the uncertainty about how it will reopen that could prove far more destructive in the long run,” Limbaugh declares. “And the knee-jerk reaction from a jittery Congress in the form of multi-trillion-dollar bailouts could create a number of disincentives for many people to go back to work.”

You know, I’m a guy on the radio. I can say this. Domenech writing his piece can say it. But if somebody on the task force goes out there today and says it? If somebody in business comes out and says, “You know what? We gotta get back to work. We’re risking long-term damage”? Boy, are they gonna be hit.

The media is gonna cream ’em for insensitivity, not caring about how many lives are lost. But it is a reality that cannot be ignored. “[T]his is exactly the moment when we should expect more from our local officials than being led around by national cable news.” National cable news and its overall attitude of apocalyptic futures ought not be what dominates everybody’s mind-set.

Rush makes the case you can’t keep people in their homes with no end in sight.

“I’m fully aware of what needs to be done to stop the spread of it, all these mitigation things — the social distancing and all that. My only point is you can’t keep people in their homes interminably with no end in sight to it. There has to be some way of conveying an evaporation of the uncertainty that exists out there,” Limbaugh concludes.

Rush Limbaugh wasn’t aware at the time of his broadcast of the report that the data in New York City appears to be “cooked.” However, his points on the economic shutdown just cement what Americans are thinking at home. We all want to be safe.

However, there is a way to open up the economy and keep some key precautions in place. President Trump will need our support as the Democrats are banking on keeping the economy shut down until its utterly ruined.

BUSTED! Planned Parenthood Is In BIG Trouble, Here’s What The FBI Wants Now

For decades the organization known as Planned Parenthood has performed abortions using taxpayer dollars. They have pushed for this evil practice to be promoted and preserved in our society. Their lobbyists in the government are influential and everywhere. However, it looks like they may have overstepped their bounds, as a criminal investigation might end their business for good after what the FBI wants now. […]

It is safe to assume that former New York City Mayor Rudy Giuliani does not have any affection for former FBI Director James Comey. But Comey’s week just went from bad to worse if Giuliani’s blockbuster statement about him is true. […]

After Whoopi Screams ‘GET THE F**K OUT,’ Judge Jeanine Gets The Last Laugh

Last week on ‘The View,’ co-host Whoopi Goldberg kicked Fox News’ Jeanine Pirro off the show before spitting on her backstage and telling her to “get the f**k out of the building.” Pirro has officially gotten the last laugh, however, if what happened over the weekend is any indication. […]

Americans are outraged at the circumstances surrounding the death of George Floyd. An evil officer like Derek Chauvin, who had 19 years on the Minneapolis Police Department, should have been stopped long before he ever met Floyd on Monday. Well, now we know it was Senator Amy Klobuchar and other Minnesota Democrats, who had the chance to stop him multiple times, but they looked the other way. Don’t miss this. […]

Leftwing activist Michael Moore urged the Minneapolis rioters to “burn down the evil police precinct as contrition to black America.” He also called the rioters and looters “good citizens” and told the police “to go home.” Within a few hours, that is exactly what happened. Well, poor Mike didn’t know what hit him as Americans immediately blasted him. Don’t miss this. […]

A group of self-described “heavily armed rednecks” descended on Minneapolis to defend the American citizens who were left to contend with rioters and looters. In fact, one of the armed men told a reporter he was there to “free Americans.” Well, as the armed men stood guard protecting businesses, they gave the degenerate criminals causing mayhem a rude awakening. You’ll love this. […]

Madonna is clearly trying to stay hip and relevant on the heels of the tragic death of George Floyd. The pop singer declared: “F*ck the police!” She also wants all guns banned, even to all law enforcement departments in America. Well, that’s when poor Madge got an epic smackdown that utterly devastated her. You’ll love this. […]

Minnesota Rep. Ilhan Omar has been caught fueling the rioters in her own district claiming “our anger is just.” In fact, women wearing hijabs were caught looting the Target store as Omar’s own daughter promoted a “list of supplies” the looters would need. But that’s not all. Don’t miss this. […]

Meghan and Harry, the ex-royals who moved to Beverly Hills, California, are in debt and are getting desperate. Although President Donald Trump made it crystal clear that American taxpayers would not be footing the couples bill for security, it appears Meghan and Harry are making wild accusations hoping the president will have to re-visit his decision. Well, the cops in Los Angeles have had enough of the dastardly duo. You’ll love this. […]

Joy Behar is once again disrespecting Americans who support President Donald Trump. On The View on Tuesday, the 77-year-old leftwing cohost claimed Trump supporters are too stupid to realize they are just pawns in the president’s political game. Well, that’s when poor Joy got a brutal smackdown proving she is the real political pawn of the Democrats. You’ll love this. […]

Nancy Pelosi has put out the word to the Democrats and their cohorts in the media, vote-by-mail must become mandatory in every state on the union. When President Donald Trump pushed back on mail-in ballots on Twitter, he was censored. Now, poor Pelosi is getting sued after USPS mail carrier got caught allegedly tampering with vote-by-mail requests. Don’t miss this. […]

Kathy Griffin has been visited by the Secret Service in the past for making death threats against President Donald Trump, but that didn’t stop her from making new threats Tuesday night. The D-list celebrity advocated for stabbing the president with “an air-filled syringe.” When media outlets asked if she just threatened Trump’s life, she responded: “I sure did, f*cker!” Well, that’s when it went all wrong for poor Kathy in ways she never saw coming. You’ll love this. […]