A recent photo surfaced on social media of what appears to be Black Lives Matter supporters holding down a white baby and kneeling on their neck. The photo was traced back to Ohio where the Clark County Sheriff’s Office received a 911 call on Tuesday morning. You don’t want to miss what they found.

A picture of the post was sent into News Center 7 in Ohio on Tuesday, showing the man with his knee on the back of a child’s neck, who appears to be crying. A second person in the photo is holding the child’s hands behind their back.

The extremely disturbing photograph, which was captioned by the abusers as “Blm now mf” (Black Lives Matter now motherf***er) was also beginning to make the rounds on social media after being uncovered by Vincent James of Red Elephants.

“According to emergency scanner traffic, deputies, police, and medics were called to two different addresses Tuesday morning in Clark County as a part of the investigation,” News Center 7 reports.

Quickly, netizens uncovered the identity of the alleged abuser as Isaiah Jackson who resides in Ohio. Various reports confirm Jackson is not the father of the child but was dating the mother who was identified only by a first name: “Erin.”

The mother was contacted by friends who saw the disturbing photo of her child.

“Erin” claimed in text messages that she did not know about the photo. She defended herself by saying, “I didn’t know it was taken. I would never let anyone hurt my child.” However, when other acquaintances pressed the mother, she became increasingly defensive and belligerent as these texts show: 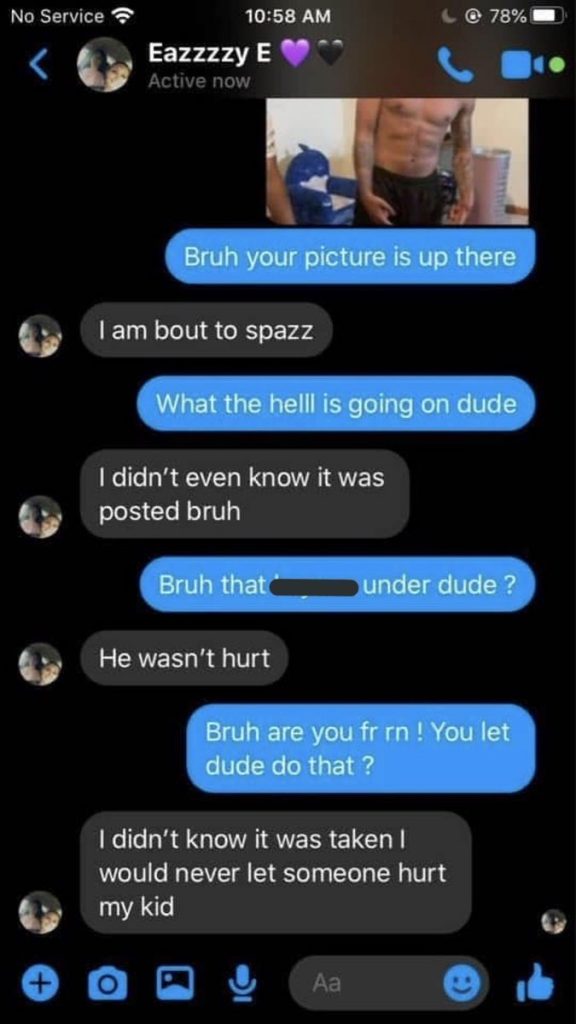 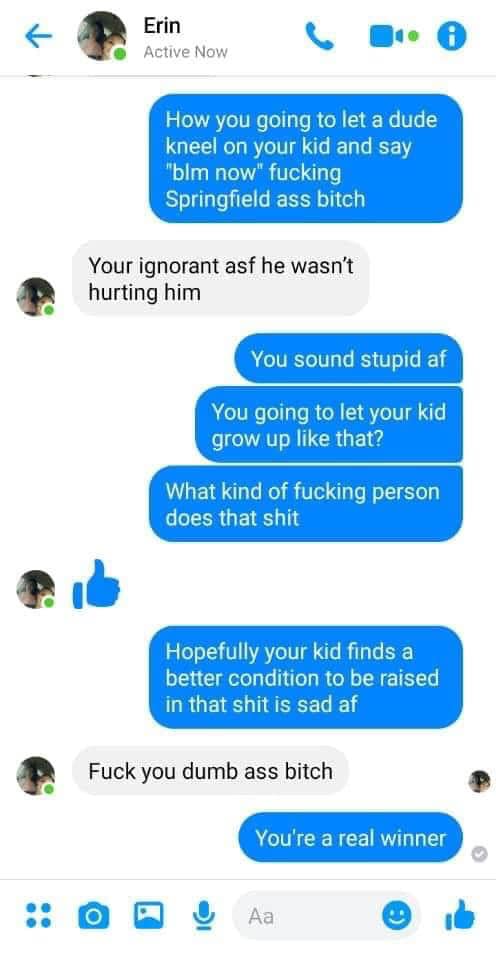 The paternal grandmother of the child provided conservative outlets with these screenshots of Erin’s text messages. She also claimed the baby was now with her son, the father of the child.

“My son is beyond pissed. He took his boy to the ER to get checked out and everything came back good,” she wrote. “He better be glad nothing bad happened to my grandson and he better hide from all the people who will be coming for him when he gets out of jail.”

According to public records,  21-year-old Isiah Anthony Wayne Jackson was taken into custody by Clark County Sheriffs on July 21 for a “probation violation” as the investigation into the photo continues. At this point, there is no bail.

When asked how the family is doing, the grandmother said that they are okay, but none of them slept last night.

She said that the mother is not normally like this and that she suspects it is because of the people she has been hanging out with.

“When I saw the person holding his arms back it made me so much more upset,” she said. “The fact that he was crying, it makes my stomach hurt. He didn’t have anyone there to protect him or stop it.”

Most Americans will agree if this was a black child the mainstream media would be having fits and publicizing this case 24/7. This is also a great example of what type of individuals are drawn to the Black Lives Matter movement.

As we learn more and more about BLM promoting its Marxist agenda and the ruination of the nuclear family, only uneducated fringe lowlifes would be drawn to its cause. What more do we need to know? BLM should be recognized as a “terrorist organization,” not because of this disturbing incident, but because at its very core BLM’s goal is to destroy our American way of life.

Over the weekend in Maine, a white man was brutally beaten to death by a mob wielding bricks and bats. Of course, most Americans saw no mention of this horrific case by the mainstream media, and it’s all because of one infuriating reason. […]

We all suffer from road rage every now and then, especially when we’re late to work and traffic is frozen to a stop. However, some people take it too far and see getting cut off on the freeway as an opportunity to live out their fantasy of competing in a real-life death race. For two Florida men, a game of “cat and mouse” escalated into a deadly contest, culminating in gunfire. […]

A shocking video has surfaced out of Baltimore, Maryland, where a violent carjacker victimized an innocent man before getting a brutal dose of karma two days later. You don’t want to miss this. […]

President Donald Trump busted up the “Big Pharma” companies by making massive slashes to drug prices. He announced this on Thursday in Ohio. In fact, no other president has dared to go so far to make sure Americans have the lowest prices in the world. Then, he made a very cryptic remark which indicates his life is in danger. Don’t miss this. […]

Candace Owens exposed how the Democrats are pushing an election scam using the coronavirus. “Coronavirus is the greatest rigging of an American election that has ever taken place,” she said. But that’s not all. The conservative firebrand really angered the Democrat elite, and you don’t want to miss this. […]

Michelle Obama is pushing for turning America into a socialist nation with extreme taxes. She also sees the “coronavirus crisis” as just the thing to finally make sure our nation is “transformed” as her husband promised while he was president. The former first lady proves the Democrats are out to “redistribute your wealth” based on fear of the pandemic, and that’s when she got a big reality check. You’ll love this. […]

New York’s attorney general sued the National Rifle Association on Thursday, seeking to put the powerful gun advocacy organization out of business. The NRA claims this was a “baseless, premeditated attack on our organization and it’s a transparent attempt to score political points and attack the leading voice in opposition to the leftist agenda.” Patriotic Americans along with Donald Trump also had a response which immediately caused the leftists to freak out. You’ll love this. […]

President Donald Trump stopped to speak with the press as he was leaving the White House on Thursday. “I just saw that horrible clip of Joe Biden,” the president said. “He totally insulted and disparaged the black community. You’ll see it. Everyone will see it.” In fact, Biden’s new racist remark is so outrageous, many political pundits are saying: “It could cost him the election.” Don’t miss this. […]

Michelle Obama launched her new podcast on Wednesday, and immediately she started complaining about how her life is so difficult being a black American living through Donald Trump’s presidency. Michelle claimed she’s suffering from a “low-grade depression” and “wakes up in the middle of the night” worrying about how racism — “that has plagued this country since its birth” — is only getting worse. She rambled and whined about her life, and that’s when patriots torched her. […]

If Cher was a politician, the Hollywood star said she would be raising a ruckus against Republicans. “F**k those heartless Republican gutter rats,” she ranted. The 74-year-old singer is blaming the president and the GOP for Democrat policies which are keeping people in lockdown and for Nancy Pelosi who is refusing to work on the extension of federal unemployment benefits. Well, patriots utterly destroyed Cher. You’ll love this. […]

Oprah Winfrey held part two to her live-stream Apple TV series on Tuesday night. The billionaire media mogul advised “white people” to get “woke” to their own “unconscious racism.” In other words, white Americans might think they are not racists, but deep-down they are. She also claimed that “first-degree racism” is still happening in America. Well, that’s when poor Oprah got a big reality check she never saw coming. You’ll love this. […]

Joe Biden had an utter meltdown on live TV Wednesday morning. Making matter worse, the former vice-president blasted a black reporter who caught him in a huge lie about his cognitive testing. “Are you a junkie?” Biden asked. Now, his campaign is feverishly attempting to do damage control, but it was too late. Americans torched him. You’ll love this. […]

Black Lives Matter has been caught using “mafia tactics” on Cuban-American business owners who are true patriots. BLM has threatened their establishments if they don’t agree to their ridiculous demands. Well, those business owners immediately fought back, making them regret it. You’ll love this. […]