Another bizarre turn of events in the 2020 presidential election was uncovered over the weekend. A man who previously worked as Kamala Harris’ “official campaign photographer” was employed as a Dominion Representative who worked on Election Night in Floyd County, Georgia. You don’t want to miss all the details of this connection.

According to the minutes of an ELECTIONS & REGISTRATION meeting on February 11, 2020, Aric Thompson is listed under “New Business.”

“Mr. Brady introduced Aric Thompson as our on sight technician from Dominion,” reads the minutes from the meeting:

On March 23, 2019, Aric Thompson mentioned that he was working with Democratic activist Stacey Abrams and was so excited to become Kamala Harris’ official campaign photographer. He shared his sentiments in a Facebook post:

“Now that I’m home, contracts have been signed and I’ve been vetted by security, I can spill the beans on my big shoot! I’ll be the official photographer for Senator Kamala Harris who is running for President in 2020! I’ve been her Atl [sic] photographer for a while now so it was a great surprise when I got the call to shoot for her during her fundraising events on Sunday! Added Bonus I forgot to mention! I leave from shooting for Kamala and head to shoot an event with Stacey Abrams…! Blessed!” Thompson posted. 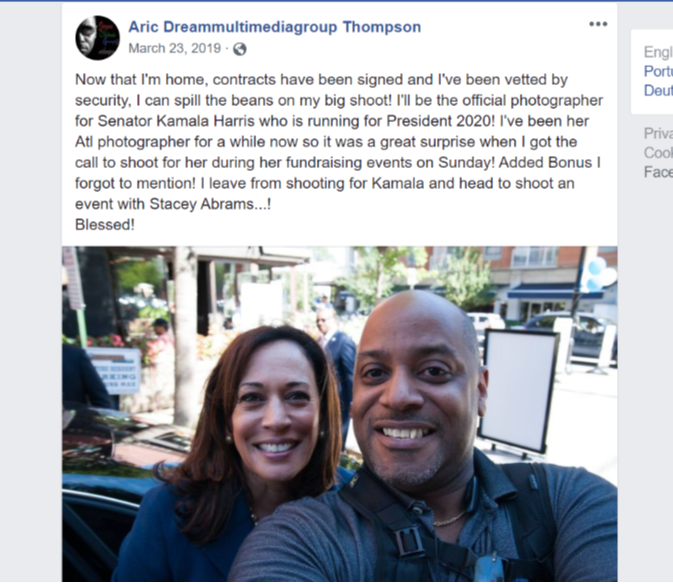 Thompson was introduced as a Dominion on-site technician in February, and we suspect Stacey Abrams was the behind the scenes boss in Georgia and has been touted as the person who delivered “Georgia for Biden.”

Thompson served as an elections systems representative throughout the primaries and the general election tabulations.

This is one of 2 men scanning in ballots in Floyd County. He worked for Kamala Harris. According to Rome City Commissioner Democrat Wendy Davis, & Floyd County GOP Chair Luke Martin, no observers were present for some of the scanning. Over 3000 uncounted votes found. @RealAmVoice pic.twitter.com/DQnTXDW7GP

His photography Facebook page confirmed that he claimed to be a representative for the Dominion tabulation machines during the vote counting.

“Thanks for the prayers! All my election equipment running at 100%! No voting issues!” Thompson posted on November 3, 2020, which was Election Day.

In another Election Day post, he added: “Election day and I’m clocked in at work and doing final checks before it’s officially go time! Pray for us in the election offices and the polls! Whatever the outcome, someone is going to lose their minds and tragically, their lives tonight!”

Additionally, Thompson confirmed that he assisted with the recount and is preparing to assist in the runoff election.

“This has turned into the never ending election! Now he wants state wide recounts…!” Thompson posted on November 6, 2020.

One Facebook user commented: “You can’t possibly be surprised.”

“No, but I’m part of that recount and we have runoffs to prepare for at the same time. This is going to cost a ton of money for no reason,” he replied.

“Yep, that sounds like him! No concern for the cost or effect on anyone but him,” the Facebook commenter responded. Thompson added a “like” to this statement. 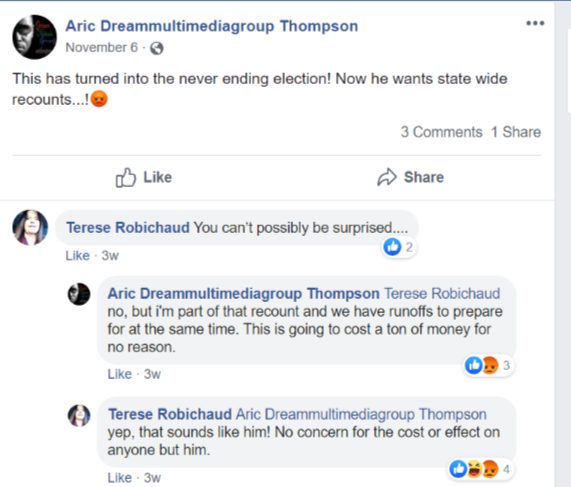 Aric Thompson also posted to his Facebook page on November 15 a Salon article titled: “President Trump tells advisers that he fears prosecution if he loses the election: report.”

How does a professional photographer get a gig working as a rep for Dominion Voting Systems in Georgia? Aric Thompson tabulated votes on the Dominion system in Floyd County. That same county had to re-scan ballots after discovering discrepancies between the number of scanned ballots and votes received.

Is it legal for a former photographer of the Harris campaign to tabulate votes?

When you volunteer to count votes in most states, you are asked if you were a candidate or worked for a candidate on the ballot. Most states bar those who are employed by a candidate to work at the polls.

“‘Defendants are hereby ENJOINED & RESTRAINED from altering, destroying, or erasing, or allowing the alteration, destruction, or erasure of, any software or data on any DOMINION VOTING MACHINE…’ A THIRD ORDER. *BIG* Legal Victory for @TeamTrump,” Kyle Becker tweeted.

"Defendants are hereby ENJOINED & RESTRAINED from
altering, destroying, or erasing, or allowing the alteration, destruction, or erasure of, any software or data on any DOMINION VOTING MACHINE…"

Thompson deleted his Twitter account after this information started to go viral. There is no doubt this is a huge conflict of interest which may come back to haunt him and the Biden campaign as these Georgia lawsuits move forward.

Americans have a right to free and fair elections, and the Democrats have made a mockery of our election integrity by making the United States look like a third world banana republic.

Outrage erupted over California Democratic Senator Kamala Harris’ recent sickening joke about President Donald Trump’s death during an appearance on “The Ellen DeGeneres Show.” This woman just proved that she is definitely not presidential material for 2020. […]

Kamala Mouths Off On Senate Floor, Condoleezza Rice Smacks Her Down… Hard

Sen. Kamala Harris (D-CA) has been touted as a possible 2020 candidate for president, so she’s always looking for some way to grandstand. Harris’ latest stunt to get her name in the news involved mouthing off about President Donald Trump’s Supreme Court pick, Judge Brett Kavanaugh. However, having had enough of Kamala’s games, Condoleezza Rice stepped in and smacked her down… HARD. […]