Meghan Markle, the former cable TV actress turned Duchess of Sussex, has given birth to a baby boy. However, with Markle stating she would raise the baby a “feminist” and bucking every tradition the British citizens expect, maybe we shouldn’t be surprised by the freaky way this all went down in the end. You don’t want to miss this.

Meghan, Duchess of Sussex, said at an International Women’s Day event that she and husband Harry, Duke of Sussex, hope their baby will be a feminist.

“I’d seen this documentary on Netflix on feminism and one of the things they said during pregnancy was, ‘I feel the embryonic kicking of feminism’,” the American divorcee, 37, told her audience at the Queen’s Commonwealth Trust event, hosted by King’s College London back in March.

“I loved that — boy or girl, whatever it is, we hope that’s the case, our little bump,” added the former Suits actress. Yeah, God forbid she calls her “bump” a baby.

The Duchess — also known as the Countess of Dunbarton in Scotland, and Baroness Carrickfergus in Northern Ireland — was enthusiastically embraced by the left-liberal commentariat, many of whom regarded the entry of a mixed-race woman to the Royal Family as a totemic symbol of social progress.

However, it wasn’t Meghan’s mixed-race that caused the British citizens to turn on her, although that’s what the leftist media loves to report. It was the unusual pregnancy that started many royal watchers to question what in the hell is going on? The Trump-hating Duchess caused netizens to question why her baby bump would seemingly appear and then disappear.

Meghan told the Royal Family she was expecting during Princess Eugenie’s wedding on October 12, 2018. That caused a ton of waves as it was Eugenie’s day, who is the daughter of Prince Andrew and Sarah Ferguson. It was a tacky move, and the British people turned on Meghan for having to outdo the bride on her big day.

Regardless of the strange pregnancy with the magic baby bump, the birth today made this story even stranger. Meghan’s pregnancy was considered to be a “geriatric” and “high-risk,” yet the 37-year-old divorcee refused to give birth in a hospital, or with any doctors present, as far as we can tell.

After it was announced she was in labor, only 20 minutes transpired before they announced she had given birth presumably inside Frogmore Cottage. After a few hours, the official announcement went up at Buckingham Palace, but it was missing any doctors’ signatures which are always included with these royal birth announcements. 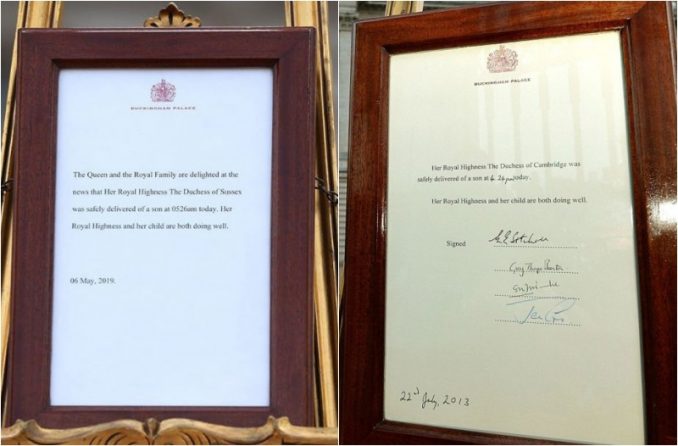 Meghan and Prince Harry decided to make their announcement on Instagram, staying true to their so-called modern image. “We are pleased to announce that Their Royal Highnesses The Duke and Duchess of Sussex welcomed their firstborn child in the early morning on May 6th, 2019. Their Royal Highnesses’ son weighs 7lbs. 3oz,” it reads. The baby is a dual citizen, having automatically acquired US citizenship, via Meghan, at birth. But there’s more.

Meghan’s father, who she has shunned and refuses to talk to, made a statement: “I am proud that my new grandson is born into the British royal family and I am sure that he will grow up to serve the crown and the people of Britain with grace, dignity, and honor,” he said from his home in Mexico.

It’s a bittersweet day for Thomas Markle, who by all accounts raised Meghan alone for many years and paid for her private schooling at Immaculate Heart High School, which costs approximately $40,000 dollars a year. He also helped pay her tuition at Northwestern Univerisity. Meghan has “ghosted” him as she has done to so many from her past that just won’t fit into her new upper-crust lifestyle.

And many of the British people who have been disgusted with Meghan’s antics over the last year were weighing in like Good Morning Britain host Piers Morgan who tweeted: “Trying, but currently failing, to muster up a semblance of enthusiasm for this royal baby story before tomorrow’s @GMB. Hopefully Meghan will announce her son is identifying as a gender-fluid vegan before we go on air.”

Trying, but currently failing, to muster up a semblance of enthusiasm for this royal baby story before tomorrow's @GMB.
Hopefully Meghan will announce her son is identifying as a gender-fluid vegan before we go on air.

“I agree don’t give a stuff, the UK is in dire trouble, and suddenly her having a kid is going to improve all our life’s. I wonder if she will send a pic to her Dad who brought her up? she is an actress playing the best role of her life,” tweeted “V8 Gooner.”

I agree don't give a stuff, the UK is in dire trouble, and suddenly her having a kid is going to improve all our life's. I wonder if she will send a pic to her Dad who brought her up? she is a actress playing the best role of her life

“Glad it’s not just me! I don’t want to sound harsh, but they made a big thing about keeping it all a secret, so that was it, interest disappeared! Makes me laugh, they want all our attention the rest of the time, yet something that we all want to rejoice, it’s kept secret!” tweeted “Jen.”

Glad it’s not just me! I don’t want to sound harsh, but they made a big thing about keeping it all a secret, so that was it, interest disappeared! Makes me laugh, they want all our attention the rest of the time, yet something that we all want to rejoice, it’s kept secret!

The British Royal Family exist to serve the British people. Ever since Meghan came on the scene, however, she thinks the people are there to serve her. The haughty attitude combined with making this baby event a total secret has turned off even the most loyal royal family enthusiasts.

Would it really hurt Meghan to have someone snap a lovely picture of the happy new family and then give it to the press? For the woman who leaks tons of rubbish about herself to the media, and who has never met a paparazzi she didn’t love, this media blackout has offended the Brits and has only fueled the rumors of a surrogate involved. In the end, Meghan may rue the day she pitted herself against the very citizens who pay for her lavish lifestyle along with bucking the Royal Family who gave the former D-list actress her royal title.

Cher is back. This time she is pushing Nancy Pelosi’s mail-in voter scam saying it’s a “matter of life or death.” The Democrats are plotting to use the pandemic to pass new legislation that will allow all states to vote by mail. “Republicans are so desperate to win they’d kill Americans. You can exercise your right to vote and risk death,” the aging celebrity declared. Well, poor Cher was in for a rude awakening. You’ll love this. […]

Alyssa Milano is having a really bad day. While Milano blasted Justice Brett Kavanaugh claiming we must “believe all women,” she now says “not believing” Joe Biden’s accuser is “the only way” to be a #MeToo feminist. Well, that’s when she got utterly destroyed by her former allies in the “believe women” movement. You’ll love this. […]

ABC’s Jon Karl is the current rotating head of the White House Correspondents Association (WHCA). That means he is responsible for what agencies get a seat at the pressers held by President Donald Trump. On Monday, Karl brought in a Chinese Communist Party “journalist” who proceeded to attack the president. However, more disturbing is Dr. Anthony Fauci who was caught signaling the ABC reporter as the presser ended. Don’t miss this. […]

Whoopi Goldberg and her co-hosts on The View are spreading dangerous misinformation on the coronavirus hoping to make President Donald Trump look like a fool. On Monday, Goldberg said Trump really needs to shut up when it comes to hydroxychloroquine and chloroquine. Goldberg led a discussion where the co-hosts agreed experts have said the drugs don’t work and accused the president of touting the drugs to benefit himself. Well, they were all proven wrong. […]

We all know the coronavirus is real. However, the mainstream media’s under-handed tactics are causing many Americans to panic. CBS was just caught red-handed using a “crisis actor” who they show on video. “In tears, a nurse says she quit her job after she was asked to work in a coronavirus ICU without a face mask: ‘America is not prepared, and nurses are not being protected!'” CBS reported. Now, we know it was all a ruse. Don’t miss this. […]

State Rep. Tavia Galonski (D-OH) is reporting President Donald Trump to stand trial at The Hague, which is the International Court of Justice (ICJ), for “crimes against humanity.” The Ohio politician claims to have connections at the ICJ, and she’s convinced the president’s “remarks” on “chloroquine” are costing lives. The leftwing politician was quickly made to look like a fool. Don’t miss this. […]

The House Democrats led by Nancy Pelosi are getting blasted for sponsoring an amendment to the current $2 trillion dollar CAREs Act to include checks to illegal aliens. Yes, they are dead serious, and the amendment is co-sponsored by Reps. Alexandria Ocasio Cortex, Ilhan Omar, and Rashida Tlaib. You don’t want to miss this. […]

Alexandria Ocasio-Cortez is making the wild accusation that the coronavirus is “racist” and that it infects many more “black and brown” people than it does white people in America. That’s why she is calling for “COVID-19 reparations.” Yes, we can’t make this stuff up. She wants your tax dollars to be spent on coronavirus reparations. Well, poor AOC got a huge reality check. You’ll love this. […]

President Donald Trump is sick and tired of the Democrats and their shenanigans. The president trashed Nancy Pelosi’s “coronavirus witch hunt” on Thursday as he is faced with the Speaker pushing for another huge stimulus package that would include two billion dollars to help her “steal the election.” But that’s not all the president is considering as the country faces economic ruin. Don’t miss this. […]

Bette Midler is spending her time in lockdown like many other leftist celebrities who have Trump Derangement Syndrome: she’s trashing the president who’s tirelessly working to get us out of this coronavirus crisis. “Trump’s overwhelming jealousy of Barack Obama will kill us all,” Midler said. She then whined about not having “enough Obamacare.” Well, poor Bette got smackdown after smackdown by Americans who are sick of the Trump-bashing. You’ll love this. […]