Seasoned politicos were shocked when Fox News’ “decision desk” called Arizona for Joe Biden when voters were still standing in lines to vote in the Grand Canyon state. One analyst, who got it right in 2016 and predicted President Donald Trump would be re-elected, claimed Fox News was clearly up to no good and triggered the rest of the events in key swing states. Don’t miss this.

Richard Baris, the analyst who accurately predicted President Trump would win Florida this year while every other pollster and pundit claimed Biden was up by 11 points in The Sunshine State, broke down why he believes Fox News called Arizona for Joe Biden so early.

It all started when Fox News pollster Frank Luntz fell on his sword and apologized to Brett Bair and Martha MacCallum during their Election Night broadcast. He said the mainstream pollsters got it all wrong once again:

However, it was Fox News who called Arizona for Joe Biden while voters were still standing in line.

Why would they do that? Even the New York Times and other networks have not yet called Arizona.

Richard Baris of the People’s Pundit explained what he believes was behind Fox News’ decision to call Arizona for Biden during his post-election day analysis. Baris said Fox News deliberately called Arizona early for Joe Biden to pause the ballot counting in the Midwest.

“If you want my honest opinion, I think they used Arizona as the linchpin to stop counting in the Midwest,” Baris told Steve Bannon. “So they could pull their delay scam.”

“Wow, give that to me again,” Bannon said.

“I think Fox News, the so-called rightwing organization, conservative news outlet, used the early call in Arizona to cut off counting,” Baris responded. “Once that happens guys — go rewind the tape and you will see Fox News calls Arizona, Fontez stops counting in Maricopa [County, Arizona], and then the Midwest went to a deadlock. Nobody reported anything anymore, and then eventually we got those dumps.”

What are these “dumps” Baris is referring to?

Overnight Wisconsin had a huge dump of votes for Biden. Notice the blue line below: 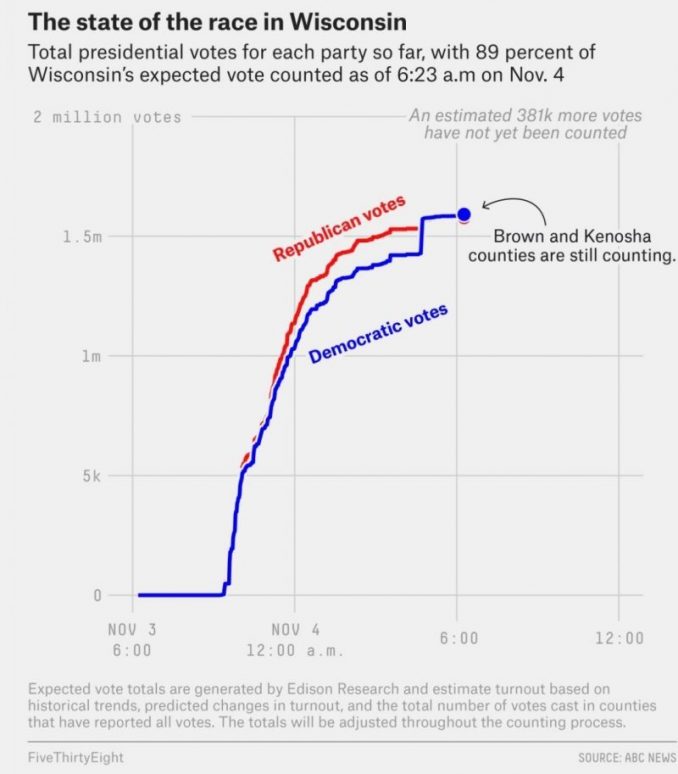 Overnight Joe Biden crept to a lead in Wisconsin, but one Internet sleuth showed that this was possibly due to fraud.

How can the GOP have dramatic victories, flipping six House seats, but the president is not also victorious? Republicans were outperforming the Democrats, by much wider margins than in 2016 in all key battleground states, when they shut down counting the votes.

“I mean LOOK at this graph for Wisconsin. I’ll zoom in just so you can see the part where Biden votes came out of NOWHERE,” the internet sleuth added.

I mean LOOK at this graph for Wisconsin

I'll zoom in just so you can see the part where Biden votes came out of NOWHERE pic.twitter.com/MPVxTWxjcZ

Arizona and Georgia are becoming suspect of fraud.

Former CIA agent Bryan Dean Wright tweeted, “My vote here in AZ hasn’t been counted. As you can see, three batches of early votes haven’t been processed, including 602 votes in batch V4. One of those votes is mine. And it’s for Donald Trump.”

“VERY worrying report coming out of Georgia about how ballots are allegedly being counted in SECRET. Observers are being misled and impeded. (The source of this claim is the GOP chairman for the state.),” tweeted Derek Duck, who screenshot a post by Georgia GOP Chairman David Shafer that says, “Fulton County told our observers last night to go home because they were closing up and then continued to count ballots in secret.”

🚨VERY worrying report coming out of Georgia about how ballots are allegedly being counted in SECRET. Observers are being misled and impeded. (The source of this claim is the GOP chairman for the state.) pic.twitter.com/HfZ2FH0X25

Trump campaign manager Bill Stepien said in a statement Wednesday that the campaign “has not been provided with meaningful access to numerous counting locations to observe the opening of ballots and the counting process, as guaranteed by Michigan law.”

He says a suit was filed Wednesday in the Michigan Court of Claims “to halt counting until meaningful access has been granted.”

This is just the beginning of the war to win this election. Honest politicos admit Trump had this victory sewn up on Election Night when the Democrats and their media cohorts snatched it away, giving them time to see what numbers they needed to win this by alleged fraud.

They couldn’t risk another 2016. Now, it’s time we start praying for our president and our entire nation. We have never seen anything like this before, and there is too much at stake.

It’s one thing if Trump had been clearly defeated. However, that is not what we believe happened on Election Night, and there will be hell to pay if Americans are robbed by those forces of evil who will do anything to take back power and stay in the Washington, D.C. swamp.

Nancy Pelosi broke the House of Representatives rules and was booed yesterday afternoon as she attempted to trash President Donald Trump and officially make sure he is “on the record as a racist.” But that was just the beginning as she was put into a “time out” and stormed off the floor. Then, all hell broke loose within the House chamber. You’ll love this. […]

Rosie: Trump’s Got Over 100K Concentration Camps In America, Gets Burned

Rosie O’Donnell was totally unhinged as she appeared on a “Bravo TV” talk show. The Trump-hater wasted no time spewing her latest conspiracy about President Donald Trump claiming he’s got “over 100,000 concentration camps” set up “in nearly every state.” Well, that’s when she got badly burned for making those outlandish remarks. You’ll love this. […]

On Monday, President Donald Trump informed the Biden campaign he would submit to a drug test prior to the debate and asked the former vice-president to do the same. Immediately, the Biden people declined. Now, a Fox News producer reveals behind the scenes details on ways the Biden campaign may be looking to get an advantage and how Trump is trying to stay one step ahead. You don’t want to miss this. […]