Internet sleuths and computer geeks allegedly got together to investigate the issues surrounding the so-called computer glitches reported in the 2020 election. For days, they have been busy scouring the election data for statistical anomalies, and they claim that they struck gold. Don’t miss this.

Many Americans woke up the day after the election and were shocked to learn Joe Biden had taken the lead. It seemed that overnight — when we were told counting had stopped in some states — that somehow the impossible had happened. It left many doubtful about the projected victor.

One indication that something might be off was an apparent sudden switch of votes from Trump to Biden in Pennsylvania that happened before our eyes on Election Night. 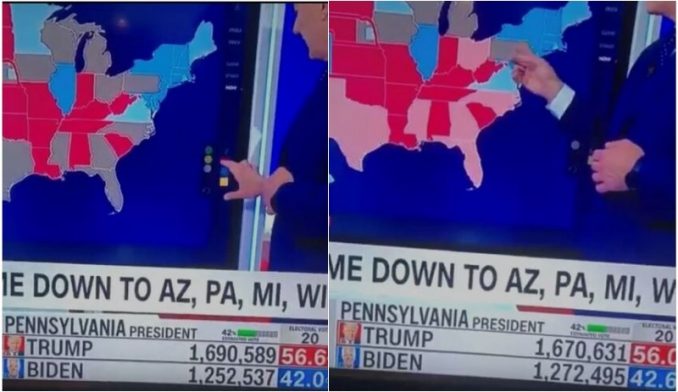 Pennsylvania uses Dominion voting systems, which forwards their data to Edison Research, which then Javascript-encodes it and sends it on to the news networks.

That’s what made one internet sleuth, who’s also a professional computer programmer and code writer, begin to delve into these anomalies. He downloaded the Edison data for Pennsylvania from the New York Times at this address and analyzed it to locate all similar vote switches, as well as for votes that allegedly just went missing.

In the Javascript code, he located a specific code that he claims changed the voting percentages for Trump and Biden: 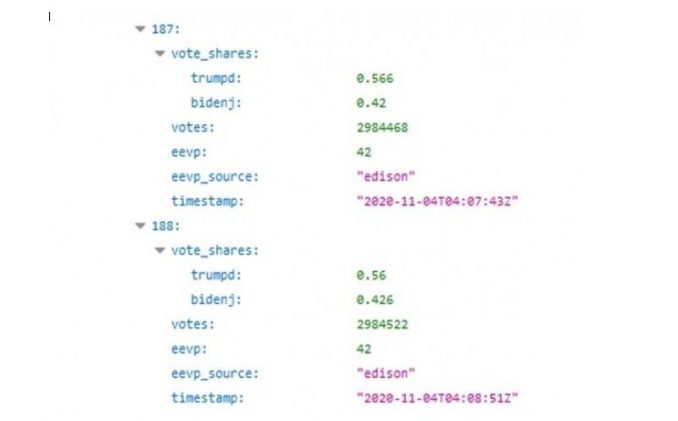 You can see that the code changed the percentages shown in the Election Night screenshot from Trump 56.6%, Biden 42.0% to Trump 56.0%, Biden 42.6%. (The code that caused the switch of 19,958 votes is buried elsewhere in the Javascript code. The “votes” shown are total votes cast, including for minor parties, and are not useful information here.) We aren’t computer programmers, so we can’t verify this claim.

These internet sleuths and computer geeks also broke down the data, saying: “We made a script to run through the data and gather all instances where votes switched from Trump to Biden. ‘Lost Votes’ means that the total amount of votes counted decreased by that amount throughout the counting.”

Remember, these numbers are for alleged electronic fraud, above and beyond the alleged paper-ballot fraud committed.

Conservative pundits who are experienced in elections have been blown away by the level of organization that had to happen to cause this alleged massive fraud. It did not allegedly happen just on one front like paper ballots; it appears as if the issues with the Dominion software are possibly another avenue that was employed.

We all know not all allegations have merit, but after days and days and reams of affidavits by poll watchers and others, one would be lying to themselves to claim all of this alleged evidence was manufactured by the GOP.

Melissa Carone, an IT contractor for Dominion Software who oversaw the election in Detroit, has signed an affidavit under penalty of perjury. Carone states in her signed affidavit that the “tabulators” would jam 4-5 times an hour.

“The computer would put out an error that tells the worker the ballot number that was jammed and gives an option to either discard the batch or continue scanning at which the counter should discard the batch, put the issue ballot on top of the batch and rescan the entire batch,” Carone said.

“I witnessed countless workers rescanning the batches without discarding them first which resulted in ballots being counted 4-5 times,” she added. “At approximately midnight, I was called over to assist one of the counters with a paper jam and noticed his PC had a number of over 400 ballots scanned – which means one batch was counted over 8 times.”

Carone’s affidavit goes on to allege GOP poll watchers were not present as required by law. “From my understanding, there’s supposed to be a republican and a democrat judging these ballots. I overheard numerous workers talking during shift change, in which over 20 machines had two democrats judging the ballots, resulting in an unfair process,” she declared.

The evidence is mounting, and it sure looks like we need to demand a forensic examination of the Dominion Software. The Democrats should have no problem with recounts, audits, and forensic examinations. They, of course, have been downgrading any issues and even making flat-out denials. Stay tuned. Americans will never kowtow to a Biden presidency unless there is proof, beyond a doubt, he won.

WATCH: Michelle MOCKS Melania For Bringing Her A Gift, Gets Caught In EMBARRASSING Lie

Michelle Obama went on television this week to mock Melania Trump for graciously bringing her a gift when they met on Inauguration Day last year. However, hours later, a video from 2009 resurfaced, exposing Michelle’s embarrassing lie. […]

Met Gala Where Donald Proposed To Melania Is Monday, Leftist Bans Her From Attending

The biggest event on the New York socialite calendar is happening Monday night — the Met Gala. Melania Knauss, as a young model, dreamed about going to the Met Gala. For that reason, Donald Trump proposed to his future wife at the expensive event. It’s something Melania looked forward to every year. But, now, our first lady will never be able to attend it again due to an infamous leftist who has been called “the devil.” […]

President Donald Trump is fighting the lies and leaks coming from the mainstream media and the Democrats who are employing communistic propaganda techniques to undermine his authority and block him from keeping his promises to the American people. Now, Trump is naming names, exposing the traitors and Barack Obama’s spies, and he wants you to know who they are. This is going to piss you off. […]