Most Americans are aware of the infamous “4 AM ballot dumps” in key swing states that poll watchers support in sworn statements that correlate to President Donald Trump’s commanding lead in Michigan and Wisconsin evaporating from one minute to the next. Well, one computer analyst claims to have located a “fraudulent electronic ballot dump” for Joe Biden, and they allege the numbers prove the president really won Michigan and Wisconsin.

In an article from American Thinker, computer analyst and author Dan Rabil, who lives in Switzerland, described how he personally saw the sudden switch from a Trump to Biden lead in Wisconsin.

“I live in Switzerland and was working at my computer the morning after the U.S. election when I was stunned to see the Fox election map suddenly do something completely unnatural: in a split second between 3 A.M. and 4 A.M. U.S. Central Time, the Wisconsin icon switched from light-red Trump to light-blue Biden,” Rabil said. “In that same instant, the probability meter, which had been very accurate in 2016, likewise jerked from a 77% Trump likelihood to over 80% Biden.”

So Dan downloaded the data from the New York Times, searched for the exact moment of the switch, and found it (see below): 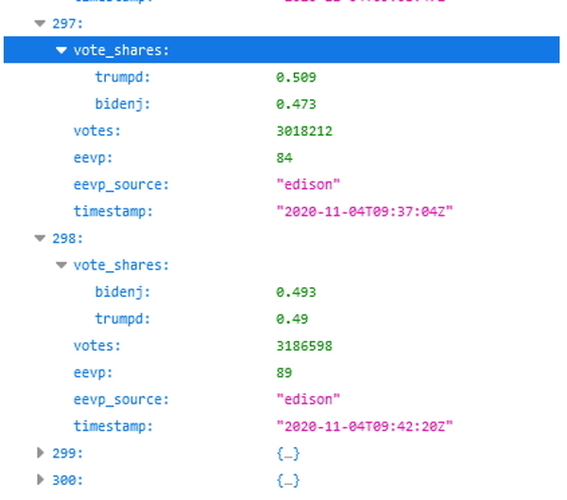 For non-programmers, here is the translation:

“These vote numbers are approximate because they’re calculated from the percentages, which are given to only one-tenth of 1%. But they’re good enough for statistical analysis,” Rabil notes.

Before the Biden vote dump, both candidates’ votes were increasing at about the same rate, 1.64% per 5 minutes. So the “legitimate” Biden vote increase is likely around 23,400 votes. The remaining 119,979 votes are allegedly fake.

Adjusting the Wisconsin figures for the “votes added” fraud, we get:

“That massive (almost 120K) increase in Biden votes within 5 minutes is most likely entirely electronic, without any paper ballots to back it up, which is why an honest recount of the paper ballots (a recount is underway, but I can’t guarantee it will be an honest one) will flip the state to Trump,” Rabil warns.

So, what about Michigan? Well, Rabil decided to search for the data himself and analyze it.

“I have not seen anybody else analyzing the data for Michigan, searching for ‘votes added,’ so I did it myself,” Rabil states. “On Nov. 14, from the New York Times I downloaded the JSON data for Michigan, and I extracted the following snippet for the early morning hours of Nov. 4.” 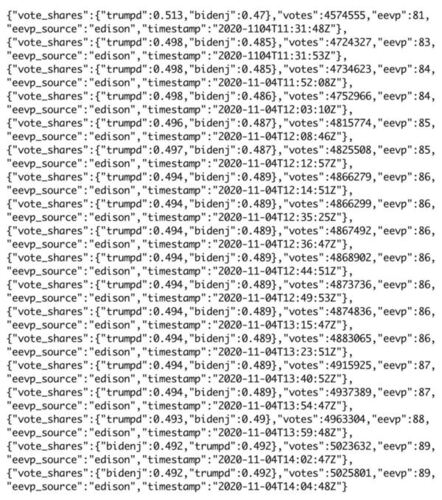 “I know, it looks like Greek to most people, but for many programmers, because it is English-like, it’s a fairly straightforward process to analyze and interpret it with the naked eye. No software program is needed,” Rabil adds.

Here is the translation and explanation:

Then between 6:03 and 6:14 AM CST, more than 113,000 “votes” were counted, at an average rate of 9,800 ballots per minute. This is highly suspect. Records show at 6 AM CST  “ballots (presumably real paper ballots) had been counted at the rate of about 1,000 ballots per minute for the preceding half-hour.”

Unlike the previous half-hour of counting, this deluge produced almost two Biden votes for every Trump vote counted.

“My total count for electronic fraudulent Biden ballots from this 2-hour, 30-minute period is 159,920,” Rabil claims. Rabil then plugs those numbers into the current Michigan numbers and gets:

Trump Team lawyer Sidney Powell says that in Michigan there were between 69,000 and 115,000 ballots (presumably fraudulent paper ballots) in which there was only one vote cast on the ballot, for Biden; no votes for anybody else on the ballot, not even for state and local races.

The alleged fraud by the Democrats seems to be on several fronts. Dumping ballots around 4 AM which is backed up by sworn affidavits. Then, we see the computer program manipulated, allegedly, which points to what Sidney Powell has been claiming about the Dominion Software Systems.

The Democrats and their media cohorts are waging a war to call anyone questioning the results “conspiracy theorists.” Well, the evidence is mounting, and it sure looks like we need to demand a forensic examination of the Dominion Software.

The Democrats should have no problem with recounts, audits, and forensic examinations. They, of course, have been downgrading any issues and even making flat-out denials. Stay tuned. Americans will never kowtow to a Biden presidency unless there is proof, beyond a doubt, he won.

Just hours ago, Judge Neil Gorsuch was confirmed to the Supreme Court of the United States, despite the efforts of stubborn Democrats who did their best to keep him off the bench. Moments after the good news was announced, President Donald Trump had a brutal four-word message for those on the left who tried to stop Gorsuch’s confirmation. […]

Al Sharpton’s a race-baiter. It’s how he makes his living. Since getting the boot from MSNBC in 2015, the scandal-laden “reverend” has been trying to get back in the limelight, secretly hoping President Donald Trump could help him out. Sharpton has known the president for years, and he knows that Trump is not a racist, but that didn’t stop Sharpton from freaking out and screaming, “Trump’s KKK,” after the president “kicked his butt” in the Oval Office. […]

On Friday, Wisconsin held a hearing on its election irregularities. Witnesses testified that very disturbing things happened in nursing homes. One elderly resident named “Susan” tried to vote for President Donald Trump, and that’s when a staffer allegedly “made sure she didn’t.” You don’t want to miss what this nursing home staffer did to the poor woman, and it was just one of many allegations involving Wisconsin nursing homes. […]