After every secret hearing in Adam Schiff’s star chamber, the House Intel Chairman makes his own summary of the testimony and publicly posts that summary as fact to the United States House website. Well, new reports from those who support President Donald Trump contradict Schiff’s summaries. In fact, using the direct transcript of the actual testimony, we can pinpoint the real “coup” started on October 29, 2019, and patriotic Americans are fighting back and winning. Don’t miss this.

The mainstream media is worthless. Any Americans getting their news about the impeachment inquiry hearings from the Trump-hating media have been sold the lie Adam Schiff has been trying so badly to sell. One of the “star witnesses” Schiff is heavily relying on is Lt. Col Alexander Vindman, who testified on October 29, 2019.

For reasons that we can only guess, Schiff held back Vindman’s actual testimony transcript until just last week. Meanwhile, The New York Times set the mood about Vindman by publishing huge fluff pieces. Vindman himself played along as he showed up in full dress military uniform, something he hasn’t worn in years and never wears to work.

“In an effort to bolster his very sketchy credibility; and likely in an effort to avoid the appearance of sedition; Vindman’s anti-Trump attorneys, who also work for Schiff, recommended Vindman wear his military uniform to the hearing, though Vindman never wore the uniform for his NSC job,” Conservative Treehouse reports.

There was a more sinister reason Vindman showed up in his military uniform.

“The word ‘coup’ shifted to a new level of formalized meaning last week when members of the political resistance showed up to remove President Trump wearing military uniforms,” CTH adds. “Not only did U.S. military leadership remain silent to the optics and purpose, but in the testimony of Lt. Col. Alexander Vindman, he admits to giving instructions to ignore the instructions from a sitting United States President.”

To date, there has been no visible comment from U.S. military sanctioning Lt. Col. Vindman for his decision; or correcting the impression represented by Vindman’s military appearance. The willful blindness is concerning, and it only gets much worse.

Instead of taking the mainstream media’s word, or Adam Schiff’s word about Vindman’s testimony, we can read Vindman’s own words. GOP Rep. Daniel Ratcliffe destroys Vindman on the stand as his anti-Trump attorney Mr. Volkov objects: 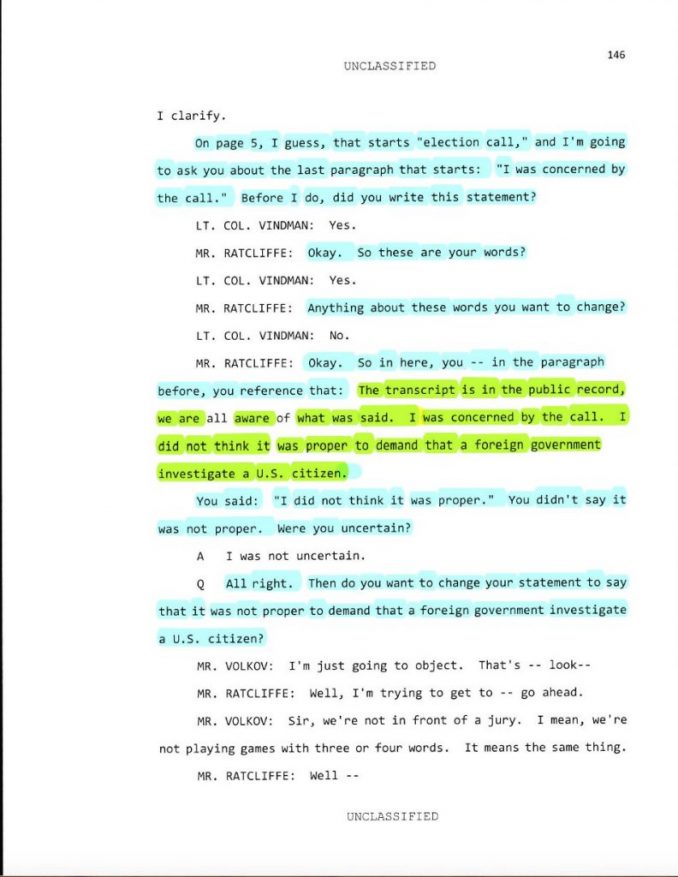 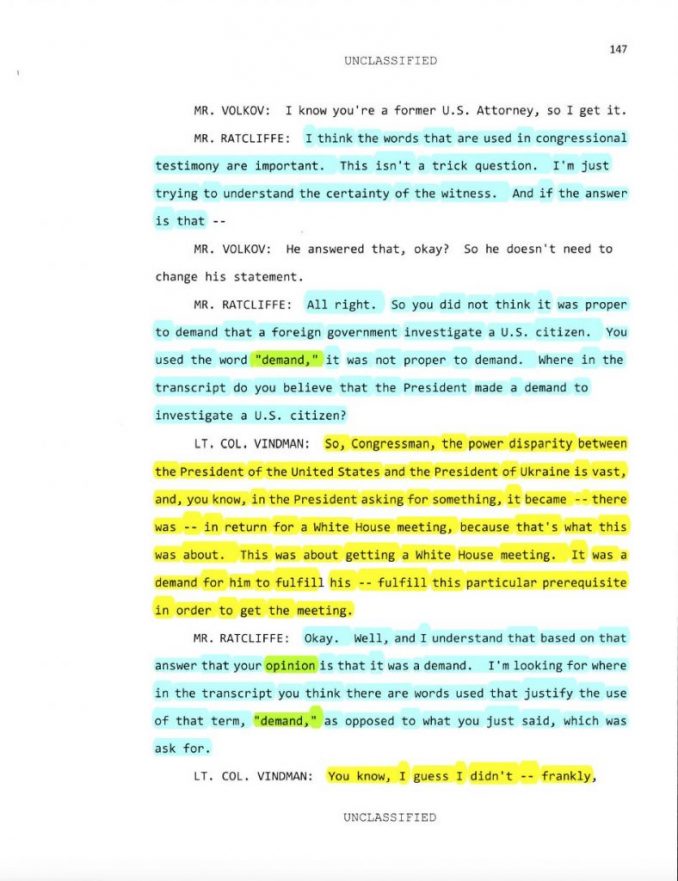 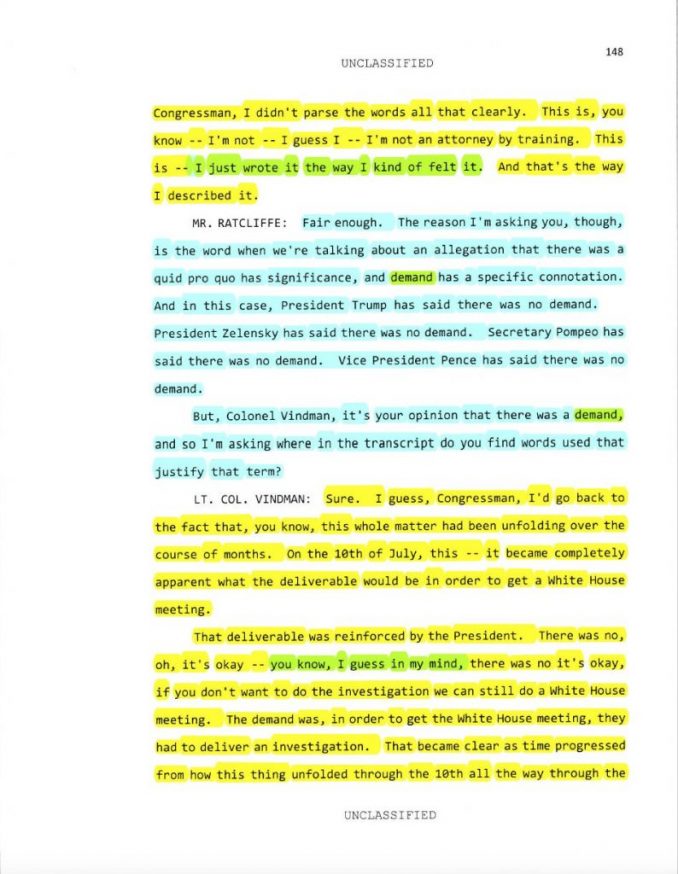 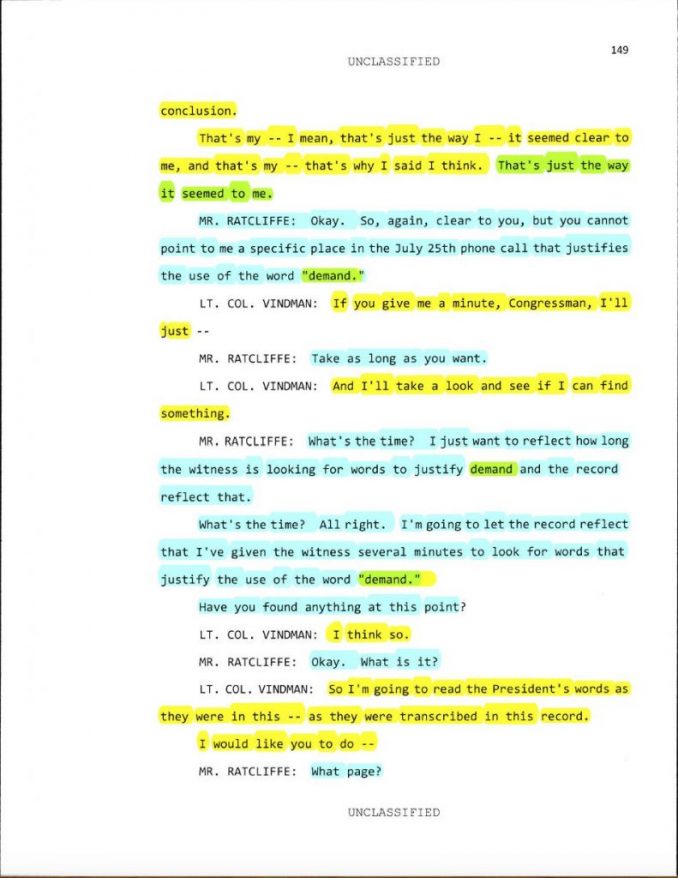 Vindman gets cornered by Ratcliffe over his assertion that President Trump was “demanding” something from President Zelensky. Ratcliffe gives him time to go over the telephone transcript to “find” where in the conversation Trump demanded anything. Vindman can’t do it.

Next, Vindman quotes President Trump from the phone call, and Ratcliffe points out the obvious — Vindman can’t prove a damn thing: 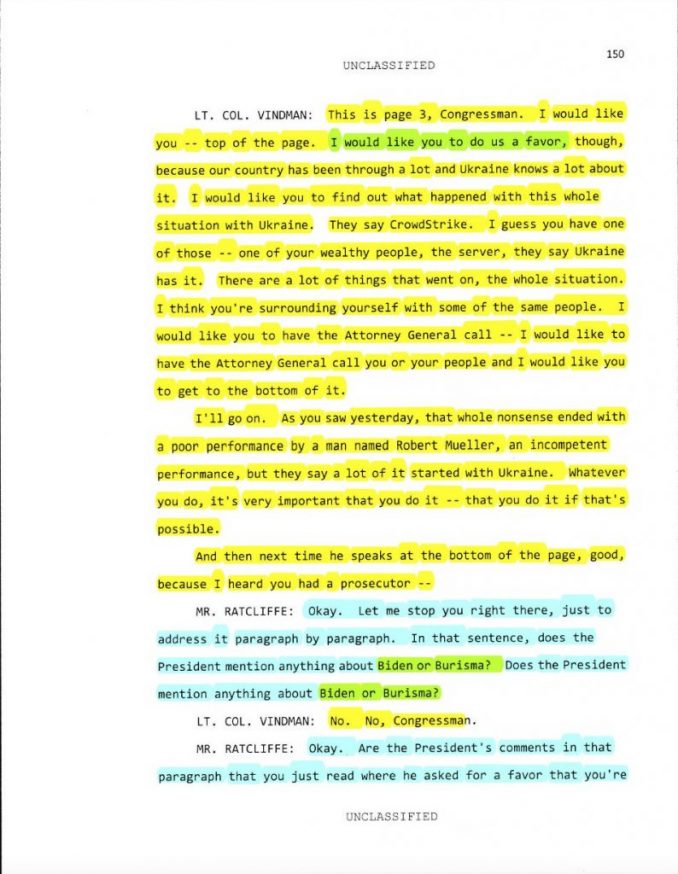 Two weeks after President Trump has established an agreement with Ukraine President Zelensky and established the policy direction therein, Lt. Col. Vindman is now giving contrary instructions to the Ukranian government.  Vindman’s lawyer recognizes where the questioning is going and goes absolutely bananas, as does Democrat Rep. Eric Swalwell who Ratcliffe chides as “President Swalwell.”

Ratcliffe takes the advantage as Adam Schiff is on a break, and the anti-Trump attorneys go nuts trying to stop the hearing and “objecting” to everything as Ratcliffe proves Vindman was going directly against the orders of the Commander in Chief: 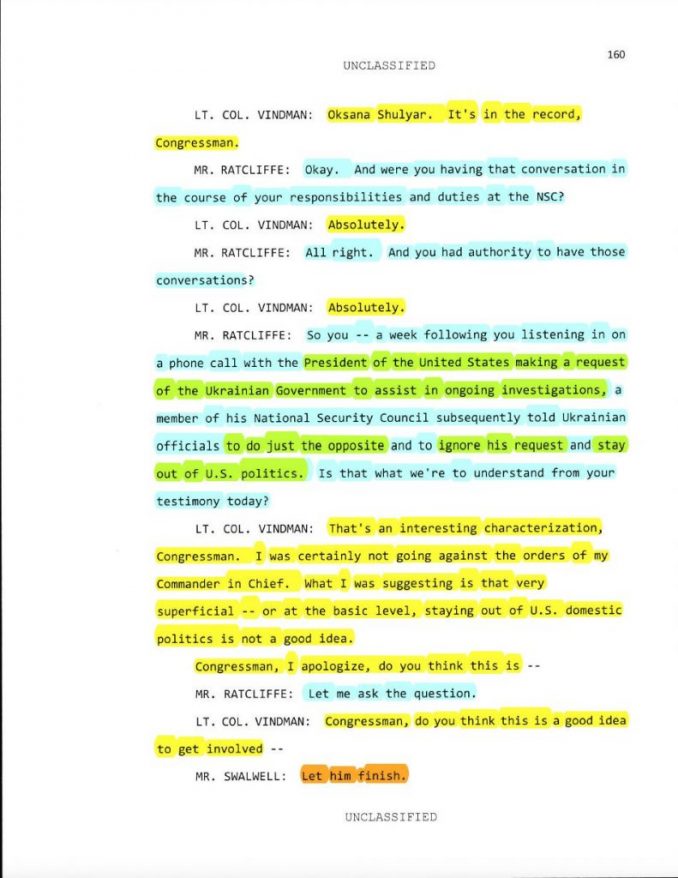 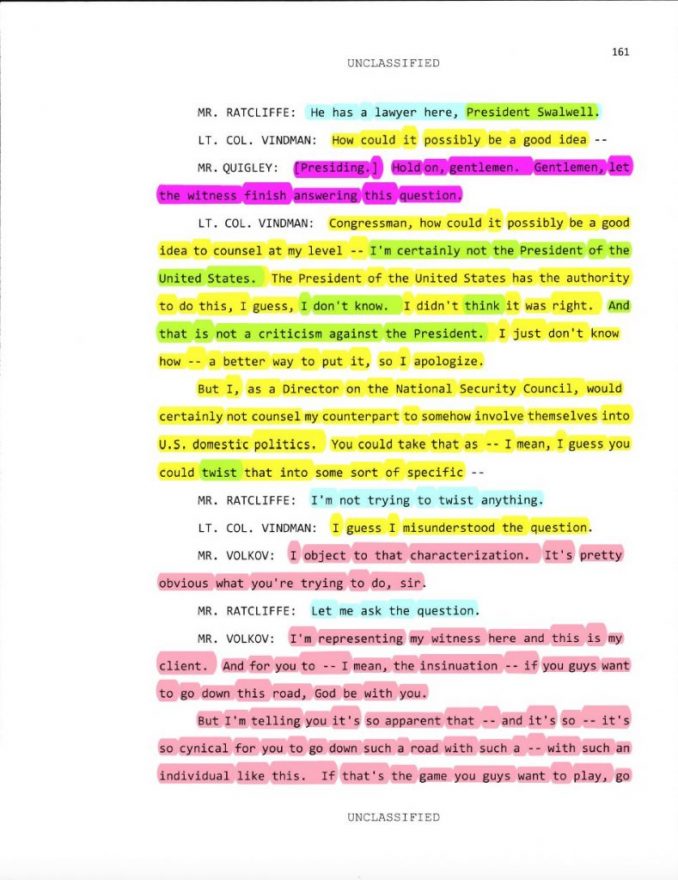 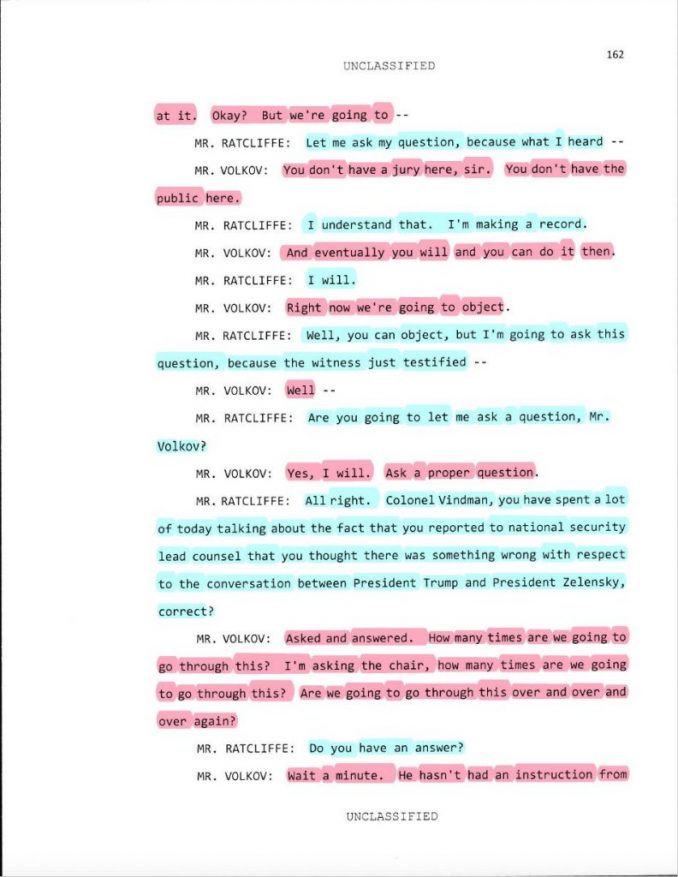 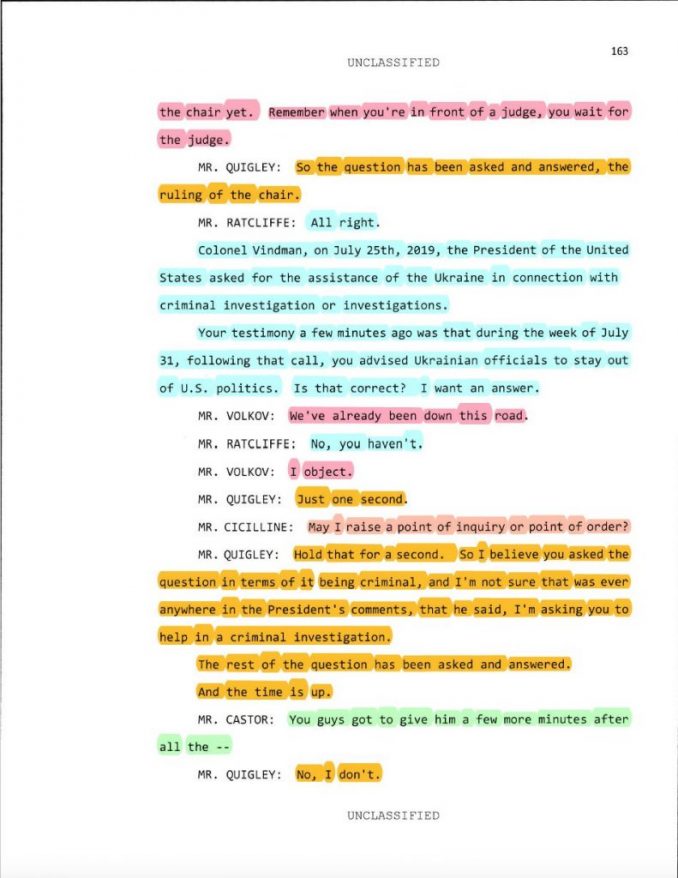 Now, this is just a tiny portion of the hundreds of hours of testimony given by the coup plotters. You can clearly see for yourself these plotters went directly against the president of the United States, who sets all foreign policy.

Making matters worse for the Democrats, Rep. Swalwell showed up over the weekend on “Face the Nation” where he had a Freudian slip and admitted the witnesses had colluded with each other, saying: “For the most part, these witnesses have not been coordinating or talking to each other.”

“Rep. Swalwell claims, ‘for the most part, [witnessees] have not been coordinating ….’ For the most part? What about the individual leading the investigation—⁦⁦@RepAdamSchiff—coordinating with the whistleblower before a complaint was even made?” tweeted Rep. Doug Collins.

Rep. Swalwell claims, “for the most part, [witnesses] have not been coordinating…”

For the most part? What about the individual leading the investigation—⁦⁦@RepAdamSchiff—coordinating with the whistleblower before a complaint was even made? https://t.co/OrCgUM31fG

This Wednesday, Adam Schiff is taking this clown show live. We all will be able to watch in real-time as Lt. Col. Vindman and three other witnesses take the stand. We can expect more objections, as those patriots like Rep. Ratcliffe and the other GOP Reps. Jordan, Meadows, and Nunes take on the coup plotters, head-on.

The rules are one-sided. Schiff has total control of the hearings and is already openly denying Rep. Devin Nunes his witness list which includes the original whistleblower. All Americans have a vested interest to speak out against this real coup which will now be carried out right on live TV.

Stand strong, and make sure all your family and friends know the truth. This war was inevitable after we elected Trump to “drain the swamp.” These coup-plotters are the swamp dwellers, the deep state, who have been forced to come into the light. With God’s help, they will be defeated once and for all.

‘I Sure Did, F*cker!’: Griffin Threatens Trump’s Life With Syringe, Goes Wrong

Kathy Griffin has been visited by the Secret Service in the past for making death threats against President Donald Trump, but that didn’t stop her from making new threats Tuesday night. The D-list celebrity advocated for stabbing the president with “an air-filled syringe.” When media outlets asked if she just threatened Trump’s life, she responded: “I sure did, f*cker!” Well, that’s when it went all wrong for poor Kathy in ways she never saw coming. You’ll love this. […]

Texas Rancher Thanks Trump For The Wall, Hands POTUS ‘Special Gift’ For Barron

President Donald Trump traveled to U.S. Border Patrol McAllen Station in McAllen, Texas, on Thursday for a roundtable discussion on the immigration crisis at the U.S.-Mexico border. While he was there, a local rancher found an unforgettable way to thank him for working so hard to build the wall, giving Trump a “special gift” that he could bring home to his son Barron. […]

President Donald Trump is in the home stretch of the presidential campaign. Trump is ramping up his rallies nationwide. This is causing Bruce Springsteen and his fellow “Rock n Roll” buddies to demand the Trump campaign stop using their songs at the rallies. Well, that’s when the president gave them all a big reality check. You’ll love this. […]