Robert O’Neill is the retired Navy Seal who killed Osama bin Laden. But Delta Airlines banned him from flights. After the leftwing cancel culture disagreed with one of his posts on Twitter, the airlines used that to ban him. Well, O’Neill’s fighting back. Don’t miss this.

O’Neill is the SEAL Team Six member who fired three shots into the head of Osama bin Laden during a top-secret May 2011 raid on his hideout in Abbottabad, Pakistan. O’Neill keeps a relatively low profile when in public, so when he posted a tweet from a Delta Airlines, he had no way of knowing leftwing cancel culture would come for him.

And come for him they did.

The Democrat National Convention has fueled the leftists with COVID tales of gloom and doom, and it’s “the end of the world.” GOP pundits joke that Joe Biden’s real running mate is the coronavirus. The Democrat nominee himself has promised one of his first acts as president would be to institute a nationwide mask-wearing.

That’s the context surrounding O’Neill’s tweet, and it’s the reason these Biden supporters went nuts after they saw it. Also, many of O’Neill’s Twitter followers are active and retired military, and he loves to banter back and forth with them on social media. Sometimes, the language gets salty.

“I’m not a p*ssy,” O’Neill joked on Twitter along with a pic of him not wearing a mask on Delta Airlines. 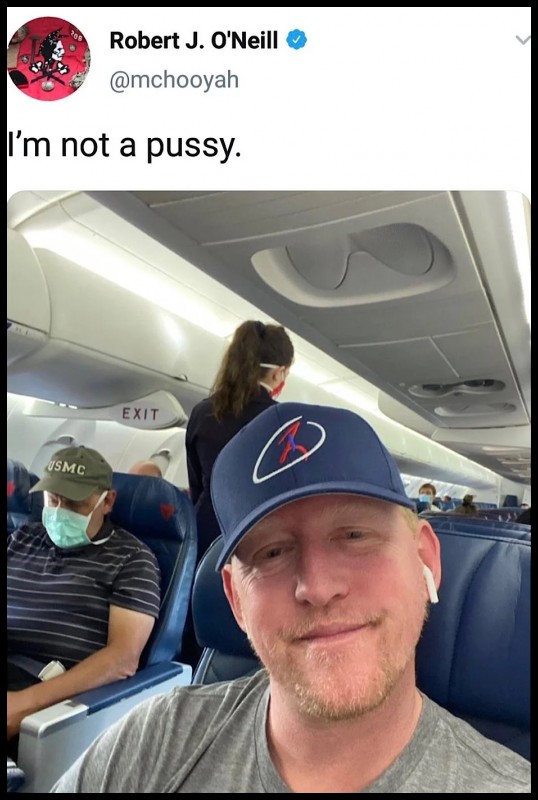 We must not joke about mask-wearing. That’s the new commandment coming from the Democratic Party. Immediately, leftwing busy bodies started attacking O’Neill, and of course, we have no doubt they also contacted Delta Airlines.

“I just got banned from @Delta for posting a picture. Wow,” tweeted the retired Navy Seal. “Delta confirmed O’Neill is no longer welcome aboard,” New York Post reports.

I just got banned from @Delta for posting a picture. Wow.

These leftists also thought O’Neill was making a dig at the USMC hat-wearer who was pictured over his shoulder. Do these idiots ever stop?

The former SEAL Team Six member later took the photo down — at the urging of his wife, he claimed — and also insisted he always wears a mask and that the tweet was “a joke.”

“Do you remember the complete, incompetent morons buying all of the toilet paper? They’re the ones telling you to wear masks now,” he explained.

“I know more about biological warfare than most of you. We were trained. These dumb ass masks do nothing. Nothing,” he insisted, adding that wearing a bandanna “does more harm than good.”

“I’m not being rude… I’m just telling you facts,” he insisted.

The Centers for Disease Control (CDC) says: “Masks may help prevent people who have COVID-19 from spreading the virus to others.” They added that tidbit to the website after the politicizing for mask-wearing started.

The University of Minnesota Center for Infectious Disease Research refused to take down their investigation into mask-wearing when it comes to coronavirus:

We agree that the data supporting the effectiveness of a cloth mask or face covering are very limited.

We do, however, have data from laboratory studies that indicate cloth masks or face coverings offer very low filter collection efficiency for the smaller inhalable particles we believe are largely responsible for transmission, particularly from pre- or asymptomatic individuals who are not coughing or sneezing.

At the time we wrote this article, we were unable to locate any well-performed studies of cloth mask leakage when worn on the face—either inward or outward leakage. As far as we know, these data are still lacking.

O’Neill is now fighting back against the cancel culture. He has gotten back to making light of the leftists trolling him on social media over the mask debacle.

“Thank God it wasn’t @Delta flying us in when we killed bin Laden… we weren’t wearing masks…” he posted causing more leftists to meltdown:

He admits he had a mask in his lap when he took the pic on Delta, but he stands by his remarks on masks. He knows the Democrats are banking on Americans to buy into this notion that the virus is our apocalypse and that Joe Biden and his Gestapo mask-wearing law will save us.

Nancy Pelosi was caught redhanded while she was unmasked at a San Francisco hair salon last week. Instead of apologizing for her blatant hypocrisy, the Speaker of the House decided to attack salon owner Erica Kious which lead to numerous death threats and caused the total shut down of the single mom’s salon. Well, poor Nancy did not know what hit her as she was just made to regret attacking Erica Kious. You’ll love this. […]

Joe Biden has been quite elusive when it comes to making comments on “defunding the police” or law enforcement issues in general. Why? He has to make the radical Black Lives Matter wing of the Democrat Party happy. Now, Biden just revealed a “shockingly stupid” plan for 911 calls, and that’s when police advocates made him regret it. You’ll love this. […]

Juan Williams, the Fox News host who co-anchors the popular show The Five, is facing major backlash after he was caught making a disparaging remark about President Donald Trump on live TV. Williams, who is a noted Democrat, claimed he agreed with a rogue GOP congressman’s assessment that it was “time to impeach this idiot.” Well, immediately Williams got torched. You’ll love this. […]