John Daniel Davidson is a senior correspondent at The Federalist. He reported on an alleged “cash for votes scheme” in Nevada that was “hiding in plain sight.” In fact, the allegations against this Nevada “Native American” advocacy group include buying votes for Joe Biden and posting the pics all over social media. This will really blow your mind.

The mass mailing of unsolicited ballots is a potential recipe for fraud, even more so in Nevada where the voter rolls contain tens of thousands of people who haven’t voted or updated their records in more than a decade.

“But there’s another, less sensational but perhaps more consequential election scandal in Nevada that hasn’t yet made headlines, even though it’s been hiding in plain sight for weeks now,” Davidson claims. “In tribal areas, Native American nonprofits illegally offered gift cards, electronics, and other ‘prizes’ in an effort to get out the vote—for Joe Biden.”

Under the guise of supposedly nonprofit, nonpartisan get-out-the-vote campaigns, Native American voter advocacy groups in Nevada handed out gift cards, electronics, clothing, and other items to voters in tribal areas, in many cases documenting the exchange of ballots for “prizes” on their own Facebook pages, sometimes even while wearing official Joe Biden campaign gear.

“Simply put, this is illegal. Offering voters anything of value in exchange for their vote is a violation of federal election law, and in some cases punishable by up to two years in prison and as much as $10,000 in fines. That includes raffles, free food, free T-shirts, and so on,” Davidson adds.

The Nevada Native Vote Project’s Facebook page contains post after post of voters receiving something of value in exchange for proof they cast a vote or handed over an absentee ballot.

In one post, two men display $25 Visa gift cards they received after dropping off absentee ballots, presumably to someone who works for the Nevada Native Vote Project: 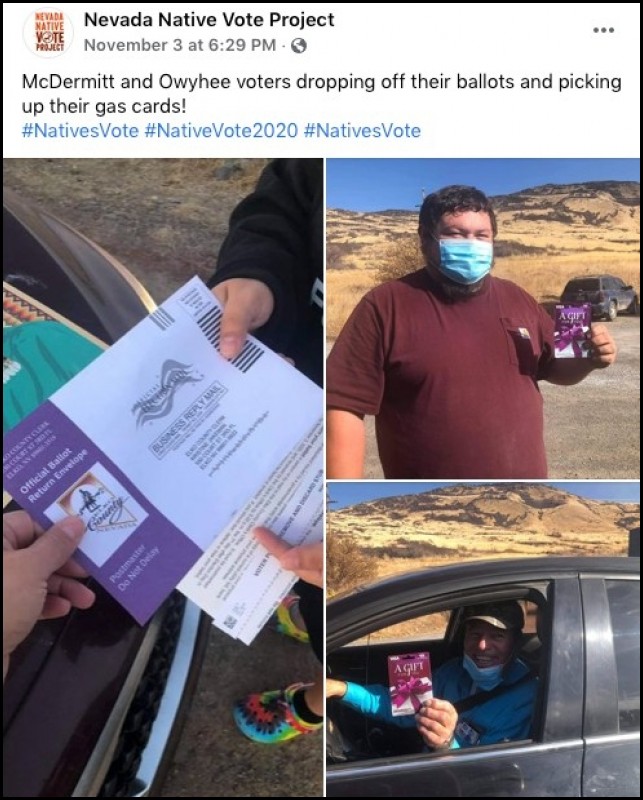 In another Facebook post, a spokeswoman for the Reno-Sparks Indian Colony, Bethany Sam, appears on video inside a polling place offering T-shirts, stickers, jewelry, and thousands of dollars in gift cards to voters.

Some of these items appear to be part of a raffle, which Sam says voters can enter in person or by emailing or texting a picture of their absentee ballot, while other items are offered to anyone who shows up in person and votes.

Sam appears in another video wearing a Biden-Harris campaign mask with the Biden campaign bus behind her, talking about how important Native votes are to “swing” Washoe County. Biden won the county, which includes Reno, by less than 12,000 votes.

In another video, she tells viewers about “Biden swag” available at a GOTV event, along with free Biden cookies. All of these videos appear on the official Facebook page of the Reno-Sparks Indian Colony.

“I called [Bethany] Sam to ask about this, and about the illegal raffles, but she never called me back,” Davidson reports.

Raffling off gift cards—the equivalent of a cash giveaway—appears to have been widespread among Native American communities in Nevada.

The Nevada Native Vote Project’s Facebook page lists dozens of gift card winners by name, all of them rewarded simply for their vote, as well as advertisements for the raffles and information on how to enter. 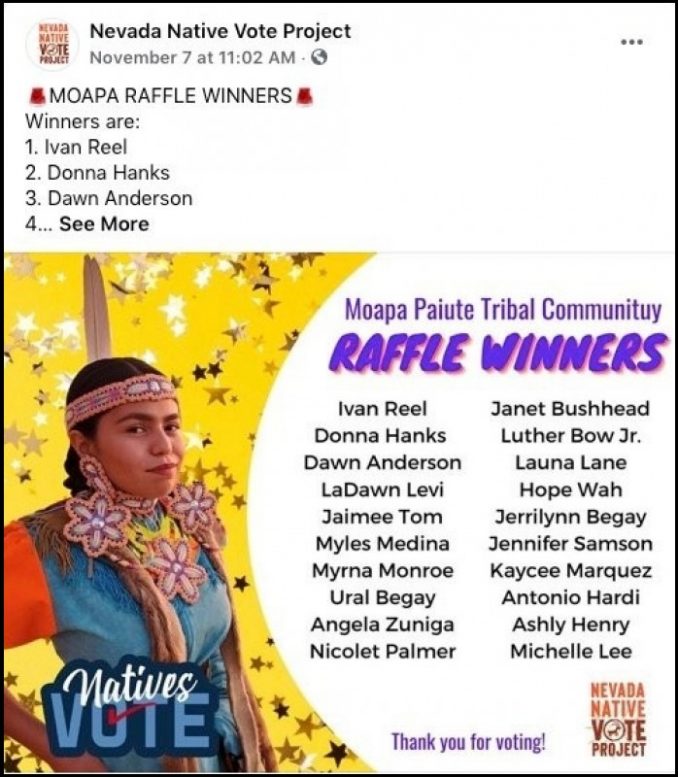 In addition to the Reno-Sparks Indian Colony, other Native groups throughout Nevada—Elko Indian Colony, Walker River Paiute Tribe, Pyramid Lake Paiute Tribe, Moapa Band of Paiute—hosted voter raffles of some sort, all of them sponsored by the Nevada Native Vote Project.

Others, like the Las Vegas Tribal Community, simply gave away “free stuff” to voters.

All of this raises some fairly obvious questions. Where did all these gift cards and prizes come from? Who paid for them? How much “free stuff” was given away? Who’s really behind this so-called GOTV effort?

Davidson did a deep dive into the funding of these Native American groups. He found they all link to the “National Congress of American Indians, or NCAI.”

More than a half-dozen government “partners” are listed on NCAI’s supporters page, including the Department of the Interior, Department of Agriculture, the Small Business Administration, and the Environmental Protection Agency, among others.

In 2018, these federal agencies provided a total of more than $3 million to NCAI, according to the group’s own disclosures.

“The ‘donate’ page for that forum, and indeed for Four Directions’ own website, goes through ActBlue, an online giving platform that funneled nearly $1.6 billion to Democratic candidates in the 2018 midterms and has since become a powerful fundraising tool for Democratic campaigns and progressive organizations like Black Lives Matter.

It also matters because this didn’t just allegedly happen in Nevada. Organizers there might have been more obvious about what they were doing, but there are indications that similar efforts, including gift card and electronics giveaways, were undertaken in Native communities in South Dakota, Arizona, Wisconsin, Washington, Michigan, Idaho, Minnesota, and Texas.

“All of this coordinated illegal activity, clearly designed to churn out votes for Biden and Democrats in tribal areas all across the country, is completely out in the open. You don’t need special access or some secret source to find out about it,” Davidson alleges.

Davidson is frustrated. He makes the case that this alleged fraud is criminal and these groups have the audacity to do it in plain sight.

The race in Nevada was decided by less than 35,000 votes with the state’s six electoral votes swinging for Biden. Davidson reported there are about 60,000 eligible Native American voters in the western battleground state. This is just another example of why this election should not be certified until a forensic investigation into all the alleged fraud is complete.

Hillary Clinton accused President Donald Trump of trying to “hijack Christianity” in a soft-ball interview with British news. The failed presidential candidate also claimed that Trump “mischaracterized” the Black Lives Matter movement and their behavior and wrongly links them to a “tiny” number of rioters and looters. Well, that’s when poor Hillary got torched. You’ll love this. […]

Cher just spilled the beans on her dream ticket for the 2020 presidential election. The 72-year-old pop icon said that she knows “Joe Biden is a really good man” and added that she would love to see him run with someone younger, like Kamala Harris, as his running mate. She thinks they can beat President Donald Trump by a landslide. Well, that’s when the Oscar winner got smacked hard for her choice. You’ll love this. […]

It’s a really bad day for the Joe Biden campaign. A new report released Wednesday from the Senate Committee on Homeland Security and Governmental Affairs outlines how Hunter Biden was allegedly involved in human trafficking and prostitution in Eastern Europe. But that’s not all. You don’t want to miss this. […]