Rep. Adam Schiff is having a very bad day after the GOP introduced a motion to condemn and censure him. GOP Minority Leader Kevin McCarthy initiated the process, claiming “Schiff has been lying to the American people for years.” The next step would see Schiff expelled from Congress. However, breaking news today alleges Schiff of doing something so criminal, getting expelled from Congress is the least of his worries. You’ll love this.

“Chairman Adam Schiff has been lying to the American people for years. Now he is so desperate to damage the president that he literally made up a false version of a phone call,” McCarthy wrote on Twitter. “Enough is enough. I have signed a resolution to censure Schiff in the House of Representatives.”

Chairman Adam Schiff has been lying to the American people for years. Now he is so desperate to damage the president that he literally made up a false version of a phone call.

Enough is enough. I have signed a resolution to censure Schiff in the House of Representatives.

On Friday, Rep. Andy Biggs (R-AZ) introduced a motion to condemn and censure Schiff for performing the fake conversation, saying in a statement that the stunt was “inexcusable” to “mislead the American public with such a statement.”

Censure does not remove a Member from office. Once the House approves the sanction by majority vote, the censured Member must stand in the well of the House (“the bar of the House” was the nineteenth-century term) while the Speaker or presiding officer reads aloud the censure resolution and its preamble as a form of public rebuke.

Censure comes first, then, the next step would be expulsion from Congress. With the Democrats holding the majority right now, expulsion is highly unlikely, however, that can change in about a year. If the GOP takes back the House, they can move to expel Shifty Schiff, and that seems highly likely after the breaking news from today.

Schiff met with the whistleblower before the complaint was ever filed.

“The Democratic head of the House Intelligence Committee, Representative Adam B. Schiff of California, learned about the outlines of a C.I.A. officer’s concerns that President Trump had abused his power days before the officer filed a whistle-blower complaint, according to a spokesman and current and former American officials,” New York Times reports.

The report goes on to explain how deep state CIA operatives met with deep state CIA lawyers and Adam Schiff’s office to make sure the bogus accusations got filed to get maximum exposure.

This is also called a conspiracy which is defined as “a secret plan by a group to do something unlawful or harmful.”

“The C.I.A. officer approached a House Intelligence Committee aide with his concerns about Mr. Trump only after he had had a colleague first convey them to the C.I.A.’s top lawyer. Concerned about how that initial avenue for airing his allegations through the C.I.A. was unfolding, the officer then approached the House aide. In both cases, the original accusation was vague,” New York Times added.

This is the money paragraph. Remember, the New York Times is anti-Trump so we need to fill in the facts of what we know was going on behind the scenes. This whistleblower complaint was manufactured by the same deep staters who manufactured the Russia hoax.

Here’s how we know this. First, the official complaint form was “mysteriously” changed in August 2019, the same month the complaint was filed, so that hearsay could now be taken seriously in a complaint.

Whistleblowers must have direct-hand knowledge of the accusation they are leveling. If not, then any gossip or rumor can’t be taken seriously. It’s basic jurisprudence in which our country was built. You can’t testify in court to a conversation or a situation because someone told you it happened. You have to have witnessed the event. Well, lo and behold, now in our own government, rumors and gossip are admissable.

Now, when the Times reports Shifty Schiff and the whistleblower was conferring with top CIA lawyers, it’s pretty easy to deduce one of the first things these rats did was change the complaint so they could get the ball rolling.

The deep staters added the “I heard about it from others” option in the official complaint form: 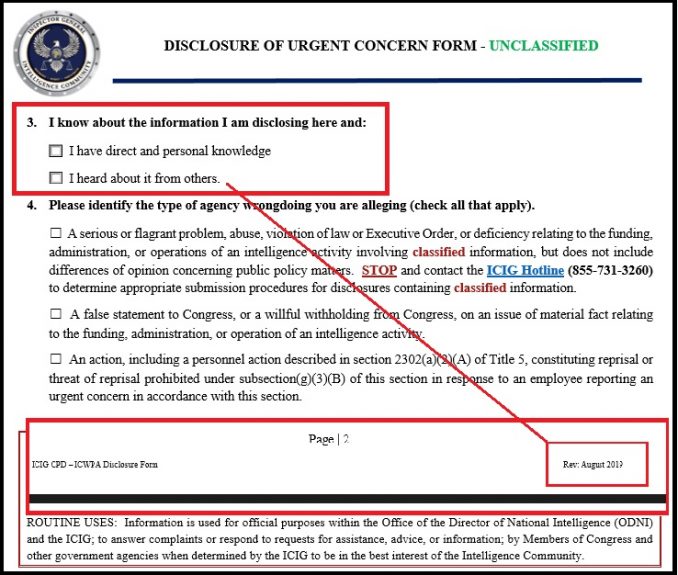 The next step was getting an Inspector General who is also part of the deep state coup plotters to judge the bogus whistleblower complaint “urgent” and “credible.”

Micheal K. Atkinson was their go-to man. “Intelligence Community Inspector General (ICIG) is Michael K Atkinson. ICIG Atkinson is the official who accepted the ridiculous premise of a hearsay ‘whistle-blower‘ complaint; an intelligence whistleblower who was ‘blowing-the-whistle’ based on second-hand information of a phone call without any direct personal knowledge, ie ‘hearsay’,” Conservative Treehouse reports.

Atkinson was neck-deep in the deep state coup attempt against Trump.

“Michael Atkinson was the lawyer for the same DOJ-NSD players who: (1) lied to the FISA court (Judge Rosemary Collyer) about the 80% non compliant NSA database abuse using FBI contractors; (2) filed the FISA application against Carter Page; and (3) used FARA violations as tools for political surveillance and political targeting,” CTH added.

Today we also found out Atkinson didn’t even review the Ukraine call before forwarding the whistleblower complaint as “urgent and “credible.”

“However, in a shocking review of the recently declassified letter he transmitted to Acting Director of National Intelligence Joseph Maguire on August 26, we learn that [Atkinson’s] investigation didn’t even include a review of the phone transcript at the core of the entire complaint. Yes, you read that right,” The Federalist reports.

So, to recap, we now have evidence that Adam Schiff was a central figure in this conspiracy to manufacturer a bogus whistleblower complaint against the President of the United States, with the end game result being impeachment.

We know nothing the Democrats are doing is by the rules with this “impeachment inquiry,” which is another term that did not exist prior to 2019. Pelosi has made Adam Schiff the point man and face of this drive to impeach President Trump, and when this falls apart Shifty Schiff will be lucky if he isn’t being perp-walked to prison on live TV.

Barack Obama’s organization, “Organizing for Action,” is a network of paid agitators. Now, his manual has been found, and it reads like he is leading a cult. Obama is talking as if he is Christ, saying that “the clouds are going to start parting” when he and Michelle “return.” What is even more troubling is what he has in store for President Donald Trump and America — this will truly blow your mind. […]

Omarosa’s tell-all book about her time in the White House was seemingly all anyone could talk about for a straight week. However, it’s been radio silence from the former Trump staffer’s camp for several days now. Perhaps that’s because Omarosa’s book didn’t quite pan out the way she hoped it would, leaving her utterly humiliated and totally vindicating President Donald Trump. […]

Adam Schiff is keeping his bogus impeachment inquiry in super-secret lockdown mode, along with refusing to allow any Republicans access to any of the transcripts. Well, we have just uncovered damning evidence that Schiff colluded with this “smoking gun” witness, Bill Taylor. We also have evidence that it all leads back to Burisma. You don’t want to miss this. […]

Black Lives Matter has been caught using “mafia tactics” on Cuban-American business owners who are true patriots. BLM has threatened their establishments if they don’t agree to their ridiculous demands. Well, those business owners immediately fought back, making them regret it. You’ll love this. […]

We now have the video of the beginning of the George Floyd arrest, and it turns out this is a far more complicated case than the leftist media claimed. You don’t want to miss this. […]

Hershel Walker rose to fame as a college athlete winning the Heisman Trophy. He is also a good friend of President Donald Trump. However, Walker isn’t on board with the Black Lives Matter movement. In fact, Walker was utterly flabbergasted as he watched players of the NBA and MLB honor the race-baiting BLM organization, and he was moved to make them regret it. You’ll love this. […]

Oprah Winfrey, who made billions as an African-American director and producer, made the wild accusation during a live-stream session on Monday that being “white gives you an advantage no matter what.” The mega-rich media mogul claimed: “[Whites have a] leg up. You still have your whiteness. That’s what the term ‘white privilege’ is.” Well, poor Oprah immediately got torched by patriotic Americans. You’ll love this. […]

Karla Fox is the Trump-supporting grandma who is being hailed a “hero” after she saw a picture of the Portland bomber on TV and promptly outed him to the feds. In fact, what makes this story so special is the relationship the 69-year-old patriot has with the bomber who is her 18-year-old grandson. However, Fox was immediately attacked by leftists, and the Trump-loving granny attacked them back. Don’t miss this. […]

Rep. Ilhan Omar must be proud of her city council that defunded the police department. Now that they have no real police presence out on the streets to respond to crime, the Democrat-run city council issued the craziest announcement ever. Don’t miss this. […]

Former Secret Service agent Dan Bongino dropped a bomb about Joe Biden’s cognitive function over the weekend. The Fox News contributor has insider sources around the Biden campaign. After he dropped that bomb, it caused the Democrats to freak out. You’ll love this. […]

The National Basketball Association and Major League Baseball had an eye-opening weekend after they launched their seasons. Week two turned out to be a disaster in more ways than one after players continue to “take a knee” and support Black Lives Matter. In fact, kneeling during the national anthem along with all of the BLM nonsense must stop or it’s game over. You’ll love this. […]

Fox News aired wall to wall coverage of the funeral for civil rights icon John Lewis, who later in life turned into a partisan Democrat hack. Barack Obama, Bill Clinton, and all the leftwing political elites were in attendance. That’s why Americans were outraged to see none of them “social distancing,” while regular citizens can’t hold services to bury their own loved ones. You’ll love how Americans torched them. […]

Court documents from a lawsuit involving deceased accused child sex trafficker Jeffrey Epstein were unsealed on Thursday night despite objections from Ghislaine Maxwell, a British socialite who was recently arrested by federal authorities for allegedly engaging in sex trafficking. Although Bill Clinton has denied being on Epstein’s island, the unsealed documents claim he was there and give the salacious details. Don’t miss this. […]