Adam Schiff is out of control. When Americans find out how he weaponized his bogus impeachment sham to spy on the president’s legal team and Rep. Devin Nunes, they will be willing to take to the streets and start a hot civil war, so say many political commentators. You don’t want to miss the details of Schiff’s scheme that may cause our nation to erupt and divide into mayhem.

Adam Schiff has gone way too far in his quest to impeach President Donald Trump. Late yesterday afternoon, Schiff held a press conference which was supposed to be about his impeachment report. Instead, he glibly announced he went behind his fellow Congressman’s back and spied on his phone calls.

There really are no words to describe just how low and disgusting this truly is, and it proves Schiff is grasping at straws to conjure evidence out of thin air.

“In a press conference Tuesday afternoon, Schiff declined to say when the committee had obtained the records, but given the Democrats’ repeated questions during the inquiry about administration officials who had worked with Nunes, such as former Intelligence Committee staffer (now National Security Council official) Kash Patel, it is likely the Democrats sought those records before or during the hearings,” Breitbart reports.

Conservative analysts point out Schiff is doing the same thing the deep state did to President Trump and his campaign: spying on them without any justification.

“There’s a particular type of anger that surfaces when you realize the Schiff team who coordinated the origination effort with the CIA whistleblower; and then vehemently hide their coordination; are the same crew simultaneously using the power of their position to subpoena private phone call records from President Trump’s lawyers, members of congress, and journalists,” Conservative Treehouse reports.

It is one long continuum of political corruption, weaponization, and fabrication of evidence to achieve a political objective. It is also disgusting in construct.

“This crew doesn’t care one bit how much they have to destroy this country, so long as they can advance a left-wing political agenda based on an unquenchable thirst for power. I never thought we would see the possibility of a hot civil war in my lifetime. I was wrong,” Conservative Treehouse adds.

Rep. Devin Nunes can talk to anyone he likes. What in the hell does Schiff think he is proving by spying on a member of Congress? Or showing Nunes talked to the president’s attorney? Who cares?

Schiff is claiming Nunes was in on the bogus conspiracy involving fired Ukraine Ambassador Marie Yovanovitch, and that is what he was talking about with Rudy Guiliani. We can’t make this stuff up. 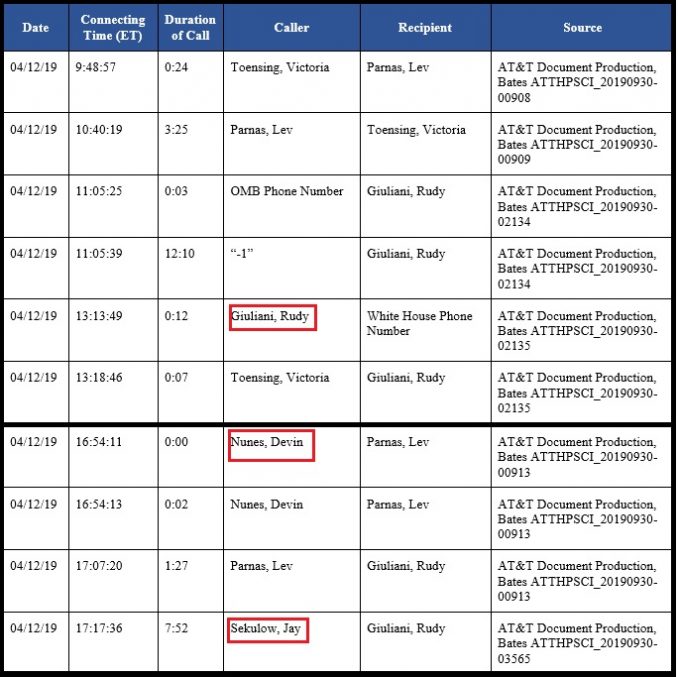 The other ridiculous conspiracy Schiff is trying to prove is Nunes spoke to this guy, Lev Parnas. Except the call says “0:00” minutes. Schiff’s crazy conspiracy involves this Parnas guy’s claim that Nunes met with Ukrainians in Vienna to “dig up dirt” on former Vice President Joe Biden.

The only problem is Nunes was never in Vienna, and Parnas has been charged with campaign finance violations and is trying to say anything to get immunity. Nunes is suing CNN for that fake news report on Parnas and Vienna.

“CNN is the mother of fake news,” says Nunes’ lawsuit, which asks for more than $435 million in compensatory and punitive damages.

Nunes appeared on Sean Hannity last night where he showed pictures of his official trip to Benghazi in 2018. The pictures are on the same dates Schiff and CNN claim he was in Vienna “trying to dig up dirt on Joe Biden.”

“RIGHT NOW Rep. Devin Nunes has photos to disprove CNN’s fake news story which said he met with Victor Shokin in Vienna. Nunes was, in fact, in Benghazi. Democrats know this. CNN has no defense for this, other than ignorance, that’s why they’re being sued for $435 million,” tweeted Paul A. Szypula. “Democrats wanted CNN’s false report to contaminate the public to muddy the waters regarding the Ukraine. Why? Because Nunes has been so effective derailing the Democrat impeachment efforts. Being effective is why Democrats slander John Solomon, Bill Barr, and Donald Trump.”

Democrats wanted CNN's false report to contaminate the public to muddy the waters regarding the Ukraine.

Because Nunes has been so effective derailing the Democrat impeachment efforts.

Being effective is why Democrats slander John Solomon, Bill Barr and Donald Trump.

It’s time for patriotic Americans to rise up and proclaim we will not tolerate any longer this impeachment scam. We need an investigation into Adam Schiff. We need to hold him accountable for spying on other members of Congress.

America is not a Banana Republic. We do not impeach presidents without any crime, and we do not tolerate rogue actors like Schiff dividing this nation to the point of a hot civil war.

President Donald Trump held a massive rally in Orlando to kick off his re-election campaign yesterday, and he also raised $24.8 million dollars within 24 hours. The rally looked like a rock concert, packing in 20,000 plus in the Amway Arena, while his war chest added a whopping $24.8 million dollars. Now, Joe Biden appears to want thanks from Americans as he took credit for Trump’s accomplishments. That didn’t end well for Sleepy Creepy Uncle Joe. […]

Adam Schiff threatened the president during an interview yesterday. Schiff claimed the White House “was stonewalling” their subpoenas to produce documents and to have officials testify. He also believes the courts are on his side. “When we go to court, we win,” Schiff declared. He added that the courts will tell Trump: “Don’t let the door hit your ass on the way out.” Well, poor Shifty Schiff has no idea what he is talking about and got utterly destroyed. You’ll love this. […]

Bernie Sanders, the 77-year-old avowed Socialist who has a long history with ties to Communism, announced he will once again run for president in 2020. And he is already attacking President Donald Trump. “Our campaign is not only about defeating Donald Trump, the most dangerous president in modern American history. Our campaign is about transforming our country,” said Sanders. Well, that’s when country legend Charlie Daniels gave the senator an epic smackdown. You’ll love this. […]